A crossword to appease all 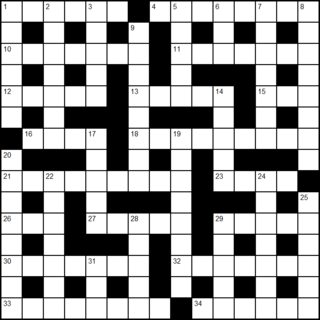 P.S. There are no cryptic double definitions.

This is a very cleverly constructed puzzle. If you are into crosswords, please consider giving this a try before reading the answer.

The postscript says that there are no cryptic double definitions in this crossword. And there's a good reason:

It is technically not possible, or at least not convenient. Each clue consists of a cryptic clue and of a plain clue next to each other in no specified order. Double cryptic definitions would turn the clues into triple answers with only two of them matching.

Some clues have a cross-reference with an asterisk. These cross-references refer to the corresponsing answers of the other crossword. (I hadn't noticed that, but the author told me so in a comment.)

The solution to the clues:

The two solved grids have some letters in common.

The enumeration (6) comes from the question, it's below the clues.

The above is, of course, another double clue:

Wrap-up: The making of "A crossword to appease all"

The inspirations for this innocuous-looking crossword were MIT2017's Stackuro and SUMS2014's Cryptish. I wanted to try my hand at writing an unusual cryptic, and hit upon the idea of using one clue to fill two grids, with the grid and enumeration playing double duty. This solidified the penultimate step of taking common letters quickly, since looking for commonalities between two similar items is a typical and intuitive extraction mechanic.

The answer came soon after as a nice thematic phrase with an equal number of letters in both parts. It seemed obvious that the hidden message should be a double clue that gave the answer.

There were two requirements this clue had to achieve:

Ideally the clue would give both parts of the answer in order, but given the above two constraints and the niceness of the chosen clue's surface, I decided to let it slide.

From here, the first hard part was making the grids. For this I used the crossword construction software TEA & Sympathy, although there are alternatives out there (e.g. Crossword Compiler). I couldn't figure out how to have two instances of TEA & Sympathy open at once, and ended up exploiting the custom clue numberings feature to fill the second grid in parallel.

Constructing the grid was a repeated process of filling from the top, aiming for words which would provide letters for the message in approximately the right locations. For instance, I started filling the top-left so that 1-across provided the first two letters of the message, then made the row below give the 5th letter, with a mental note to clue the 3rd and 4th letters using what is now 4-across. Although ideally you'd want a nice spread of message letter locations, I knew that I'd want to skew the distribution so that the top half gave more letters, since things would only get more restrictive the more the grid gets filled. 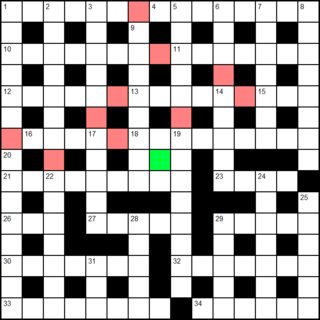 Initially I had 8 blocked out squares, but found that I kept getting stuck when filling, and gradually blocked out more as I went to make it easier for myself. This provided some 3-letter words which simplified bridging the gaps. I still wanted the grid to be "nice" — each answer still had to have at least 50% of letters being cross letters, and of course the grid had to be symmetric. Additionally, the grid had to be interconnected enough so that there was sufficient linking between the four corners, since it's easy to accidentally make the corners too detached, causing solvers to be stuck on a particular corner due to a lack of cross letters that, so to speak, poke into the corner.

When choosing words, I focused more on getting the grid filled, making preference for common words. The

pair represent the least common of the bunch, used out of necessity. Little consideration for the resulting cryptic clues was made at this point, but if a choice was presented then I'd take surface reading into account. This resulted in some awkward to clue words which lack good definitions, in particular

You can see how I went with those.

At one point I wanted a pair of two-word phrases with the same enumeration (e.g. NAME TAG and NOSE JOB), to add to the "looks like one crossword" presentation. Unfortunately, this didn't end up happening.

For the clues themselves, here are some general notes:

11a. The intention here was to drop two letters from the get-go (beginning) of DIVERSION to get VERSION. Now that I look at @MOehm's answer, I realise that this can also be interpreted as dropping the prefix DI-, which happens to means "two".

12a. In hindsight, the cryptic portion ("apartment sounded pleasant" → SUITE, homophone of SWEET) was not ideal due to the indicator being in the centre, making it ambiguous as to which answer is correct. Thankfully it's possible to disambiguate using cross letters.

16a. This clue demonstrates elision, needing to split "backward" into "back WARD = DRAW = tie". Since the fodder is given verbatim I figured it was fair, and it was hard to resist.

18a. Usually, saying "[number] points" to indicate a chunk of [number] letters from NESW is less than ideal, but in TENNESSEE's case where there are eight of them it seemed fair. It's a somewhat lazy way to clue the state, but with restrictions in mind it seemed better than the alternatives I had, such as "#10 SE reportedly" (SE being Stack Exchange).

21a. "Old-timer", as in an elderly person, typically has a hyphen. To make the quick clue "Old timer" → HOURGLASS fairer, this was intentionally left out.

26a. Ideally one might have "company, proverbially" or similar here for the definition of TWO, but for the sake of surface I ended up opting for a question mark instead.

33a. At one point I accidentally had GOLD RUSH instead of GOLDFISH here, but that wouldn't have worked due to a mismatch in enumeration with HEDGEHOG. Of course, the enumeration could just be dropped from all clues, needing solvers to infer possibilities from the grid, but the puzzle didn't seem as nice this way. Had the answer been GOLD RUSH though, it'd have been ripe for a "Sonic boom" surface.

34a. The nested indicators "untidily (trimmed GNARLED)" is a little awkward here, but it was hard to make the surface sound good. The redundant quick clue "cord or string" was used to rule out STRING as a potential 6-letter answer.

3d. "For the best" sounds better for the surface of this clue, but "for best" is nicer in terms of wordplay (since the parallel is "the best" ↔ "the ELITE", rather than "the best" ↔ "ELITE"). Since the phrase "for better or worse" exists, I ended up going with the latter.

8d. "Melbourne, briefly" for MEL is a reference to a lesser-used abbreviation of Melbourne, Australia, rather than being a general indicator of taking an unspecified number of letters from the start (which would be unfair). MEL is also the IATA code for Melbourne Airport.

22d. As obscure as it may be, the intended surface reading of "preload" here is the Linux software.

28d. If "Search" as an alternative way of saying "search engine" feels dubious, the intended surface was to read "Search" as Google Search, and the word was placed at the start to hide its capitalisation.

29d. Depending on the setter and the clue, "cover" can refer to both the first and last letters of a word (as in a cushion cover, which surrounds its interior) or just the first letter (as in a lid). In this case it is the latter, which makes sense when one realises that this is a down clue.

This was a long read, and if you've gotten this far I hope that gave some useful insights into the construction of this puzzle. Overall I'm very glad with how it turned out, even though the grid and clues could be a bit better. If you're wondering how long this took, the answer is one whole day of powering through.