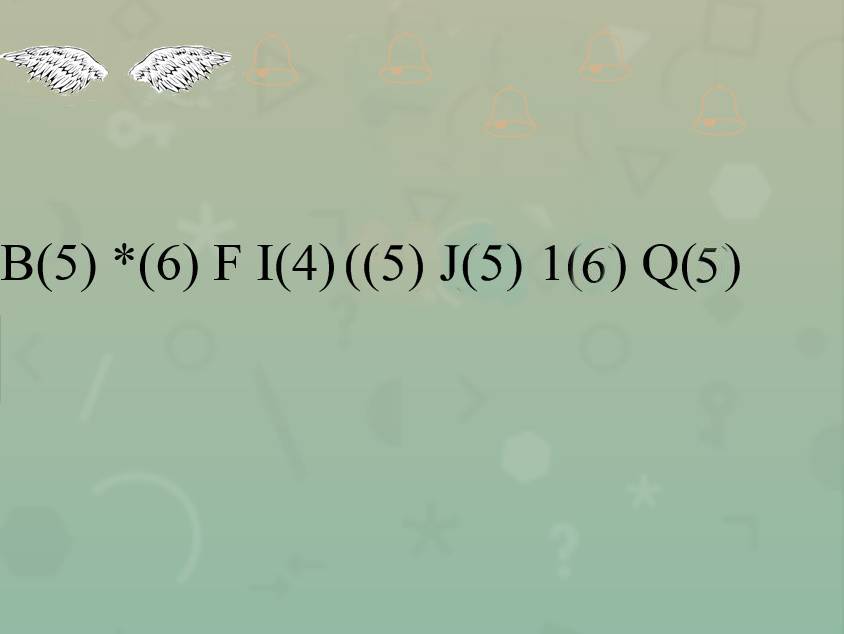 To make the solution less ambiguous, here's a clue for finding the correct words. Following are the initials - T,L,F,P,S,F,P

Continuing the work of C. Woods and Silenius, here's another partial answer plus some musings. The answer has been edited heavily after the OP has added a hint and confirmed parts of my first draft as false or correct.

All characters except the numbers in parentheses should be converted to the Wingdings symbol font, as indicated by the pair of wings and the bells at the top of the image:

Each symbol represents one word and the number in parentheses tells us how many letters this word has. The hand that points to the right doesn't have any letter count and, according to a comment the OP made to Silenius's answer, it represents itself.

First I thought that the words could be:

but the striked-through words have been identified as wrong by the OP. With the starting letters now given, the words could be:

(The first symbol shows how some people count to three, starting with the pinky finger. I'm from a region where counting starts with the thumb and I don't think that thumb and index form a circle when counting, so that took me a while. With the first letters given and the letter count updated, five, folder and plane seem rather obvious.)

A viola is either to a string instrument, a flower or maybe a woman's name. That doesn't quite fit with the hint of "Cheers!" in the puzzle.

(Perhaps the intended answer was VOILA, "there you go" in French? That doesn't fit exactly with Cheers! – which can mean "to your health", "thanks" or "bye" – either, but both expressions are single words that can express a range of things succinctly.)

I think I have a partial answer.

The wings and bells at the top make me think you need to use Wingdings to translate the symbols. I tried typing in the letters/paren/1 as many times as indicated by the number in parentheses following them, but I can't get anything from that.

The parenthetical numbers may indicate that we need to pluck certain letters from words. Following the lead of C. Woods, we can translate the non-enumerative characters to Wingdings and then pair them with likely words, getting something like:

But it's unclear to me how to pull a five letter word out of this information.

these pictographs may encode a rebus of their own. After all, the translation of FI depicts a finger pointing at a pinky (something that definitely has the flavor of a rebus). Maybe the enumerations encode a way to combine the pictographs into a larger rebus.

More thoughts building on the above.

Given the various hints, my take on the correct meaning of the symbols is:

Until the last two words, all numbers equate to word lengths; given the presence of two numbers and the word "letter" in the coded message, it seems likely that there is a second-layer solution to find.

Not the answer you're looking for? Browse other questions tagged word enigmatic-puzzle rebus or ask your own question.

9
How do I find more enigmatic, no-clues-given puzzles?
9
Seven Totally Unrelated Words
26
A star made of dice
24
Cryptic Mastermind
26
Eight Kings Problem
3
Are You Smart Enough to Solve This Rebus? Beat the Creator Challenge
3
Riley Riddle with a little bit of ciphering
8
Unusual letter combinations 2
7
Four degrees of separation (I make billions #8)
24
12 hidden clues in just one paragraph!