You bought a piece of paper from your local op shop, but your shop is always dodgy. So instead of a normal piece of A4, you got an infinitely long strip, a metre wide.
(Actually, it's a bit strange, it seems to have a flaw that causes it to change size to a yard wide when you cross the border into the US. You live near the border in Canada)

Anyway, you want to fold it some number of times then make a single straight cut across the paper you get a rectangle (you still need to find a way to make the line exactly perpendicular to the edge of the paper).
This rectangle should have the property that if you cut its width from its length, you will get another rectangle that has the same ratio of length to width, which will mean you can get a pretty spiral of squares and nice-looking rectangles.

It is said that this rectangle looks the nicest.

I'll assume the strip is actually semi-infinite, and its one end has a straight cut orthogonal to the infinite edges. The following solves it in 4 folds. The 4th fold is not needed if the cutting machine can automatically cut perpendicular to the sides of the strip. 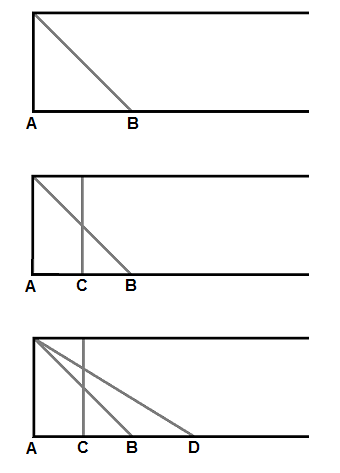 1. Fold corner A to the opposite long edge, so that the crease goes through the other corner. This diagonal fold marks a point B on the same edge as A but at distance of 1 from it.
2. Fold the short edge over to point B. This marks off point C that lies halfway between A and B.
3. Fold C to the top edge, with the fold going through the other corner. This marks off point D such that A-D has length $\phi$.
4. You need to cut the strip at D. To mark the line through which to cut, simply fold the strip through point D.

It the strip does not end in a straight orthogonal cut, or if it were infinite at both ends, then an extra fold is needed, so then my solution becomes 5 folds.

Simply fold the strip onto itself to create a straight end. Then proceed with the first three folds of the solution above. You need a different 4th fold, however.
To cut the rectangle from the strip with a single cut, you will have to insert it into the cutting machine with the strip folded so that A lies on top of D. Cutting the paper along the orthogonal fold at A then automatically cuts the other layer orthogonally at D, resulting in the rectangle we want.

well, if u have infinite paper with no beginning or end: 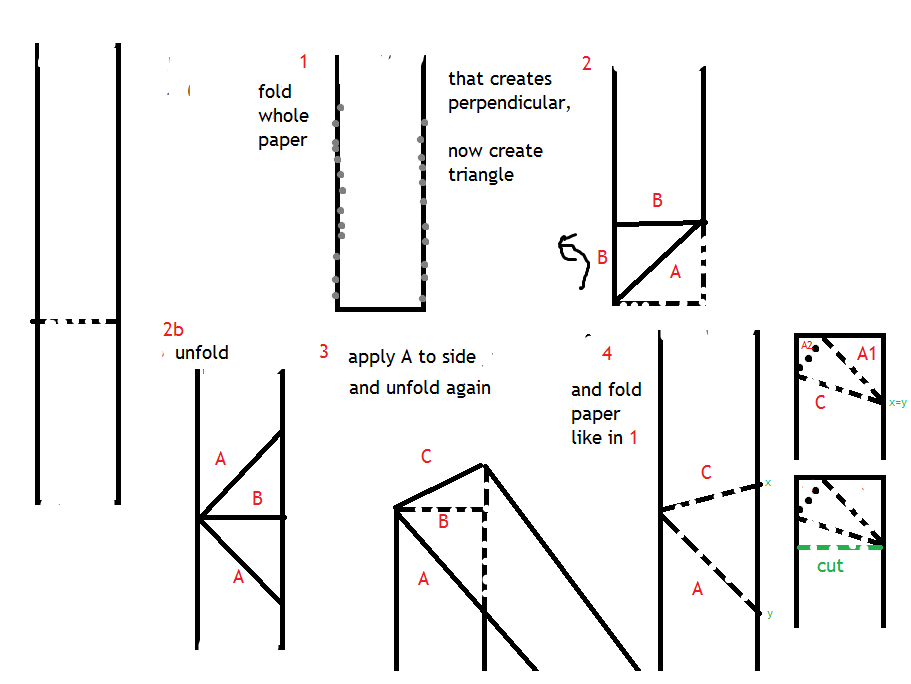 Not the answer you're looking for? Browse other questions tagged mathematics no-computers paper-folding or ask your own question.

22
Worm and an Apple
57
Folding paper into corners
16
Reassembling the Marquetry
14
Create a 1 meter measure
9
Folding a paper wouldn't be this hard
8
Taping a cardboard square is getting me fired!
4
Seven 2:1 rectangles covering a square
2
Good Rectangles and Evil Numbers
36
Can you refold a hyper plus sign into a cube?