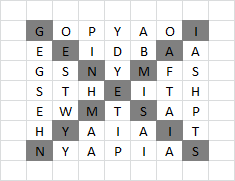 16
The Pie-Maker's Son
10
The final showdown
10
A roommate's lament
29
The Catacombs of Cryptos, The Final Path
3
The final breath
6
Puzzle: Catching the Culprit
7
The Boy of Fire: The Final Battle
14
Harriet's final exam
31
Food Fight! (An extended VowelBurger™ puzzle...)
16
The Final Straw