The most important trait for puzzling?

I was wondering what the most important trait for a puzzle creator and/or solver was. I think I've found the answer, but I could be wrong. I thought about it, deconstructed it, put it back together a different way and took it apart again. 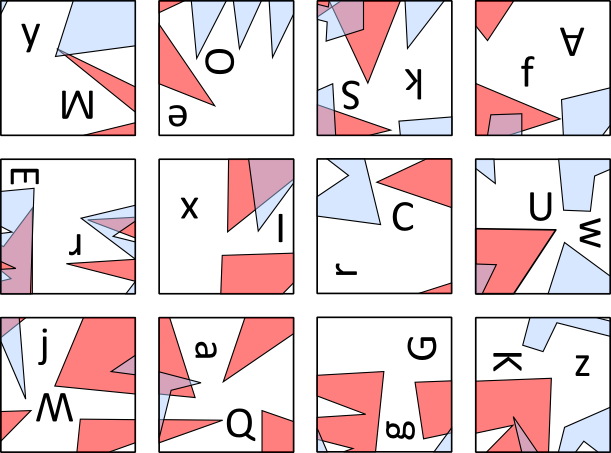 That's it, 12 tiles. But can you find the hidden trait written on them? It won't be easy. You'll know you've found it when you find a 12 letter word. Good luck!

To sort one set, you'll need to sort the other.

Rearrange the tiles so the blue shapes match up: 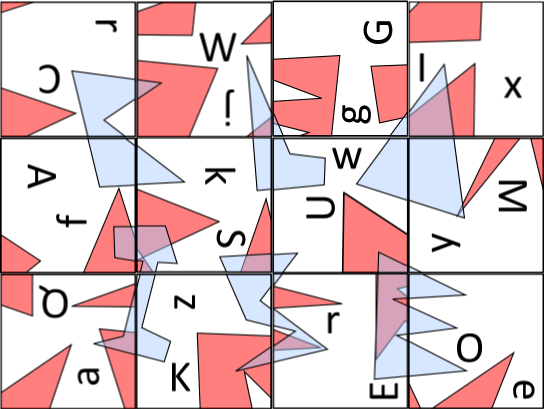 Rearrange the tiles so the red shapes match up: 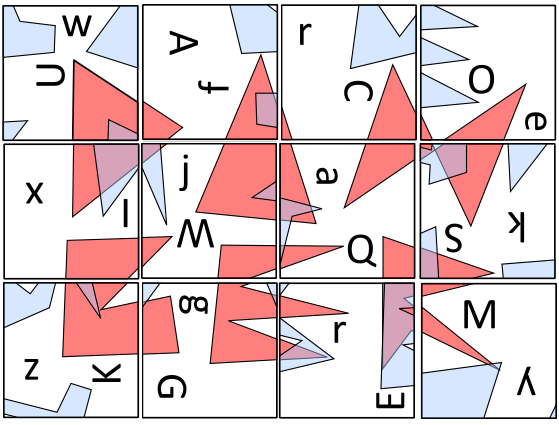 Each of the twelve squares has one capital letter and one lowercase letter. That makes 12 capitals and 12 lower-case letters. I recorded the pairs of letters e.g. U and w, A and f. That gives us: UACOIWQSKGEM wfrexjakzgry

Given the clue "To sort one set, you have to sort the other":

Notice that the lower-case letters have two 'r's, but the capital have no repeats. That suggests that we should sort by the capitals. Once I started to sort the capitals, I notice that they are regularly spaced, 'A C E G I...', which indicates that I'm on the right path. The sorted letters are now: ACEGIKMOQSUW frrgxzyeakwj

Use 'DANGER' as a Vigenère key on them

Adding onto rand al'thor's answer, I rearranged them so all the blue shapes matched up:

Each of the twelve squares has one capital letter and one lowercase letter. Since there are thus twelve of each, and the code we're looking for has twelve letters, I don't think this is a coincidence. I tried using DANGER as a Vigenère key for the strings UACOIWQSKGEM, wfrexjakzgry, CWGIASUMQKEO, and rjgxfkwyazre, the strings gotten when you take the capital/lowercase letters going left to right, top to bottom, in each picture, and got:
UACOIWQSKGEM -> RAPIEFNSXAAV
wfrexjakzgry -> tfeytsxkmanh
CWGIASUMQKEO -> ZWTCWBRMDEAX
rjgxfkwyazre -> ojtrbttyntnn
i.e., nothing intelligible.

Rearrange the twelve squares so that all the red shapes match up:

They seem to spell out DANGER.

Then do the same for the blue shapes: 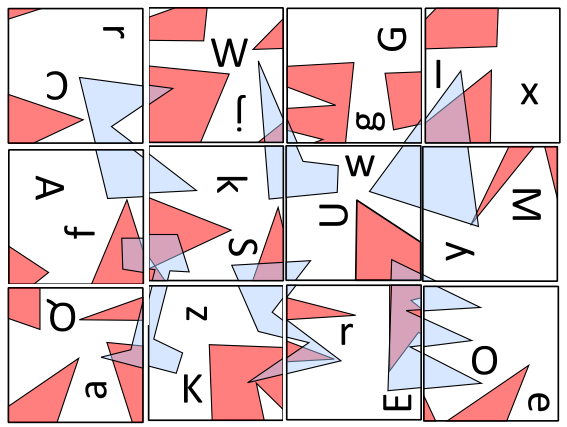 They seem to spell out BLAISE.

Note that the sentence in the OP "I thought about it, deconstructed it, put it back together a different way and took it apart again." is a hint telling us what to do here.

Sadly, rearranging these letters doesn't seem to give anything useful. Perhaps the twelve-letter word we seek is

8
Puzzling puzzling phrases
4
Everyone wants me, but I'm easy to find
22
The Temple of Puzzling
11
The answer is less complex than the riddle
8
HELP! What's the password for my safe?
6
Colorado Carl and the Lazurite Lizard - Part One
12
Attack of the Asthmatic Enemy Omnivores
11
A Puzzling Cipher: Redux
4
Mysterious Valentine's Riddle