My brother me invited me Karting this weekend, and we had a grand time, although we were way slower than the top time on the leaderboard, initialed KR. The owner told us that this was his cousin, and gave us what we thought was a very odd wink. It was then that I remembered I'd been here once before, many years ago with my father.

After going around for a while, getting little closer to the top times, my brother went into the bathroom. He comes running out about fifteen seconds later and takes me furtively into the corner. "I broke it," he moans, "we're going to be in so much trouble!"

I leave him there and head towards the bathroom to figure out what the fuss is all about, and am greeted with this chaos.

"Yeah, this is a problem." I say as I come back out, "but we might be able to fix it. See if you can line up the pieces edges, I'll text Dad to see if he happened to take a picture when we were here a while ago."

My brother nods, and shakily walks back into the hallway. A short time later my dad texts me the following. "Yeah, I did, I think he said he put it up to celebrate his brother Keke or something? It's not that big, you shouldn't have much of a problem."

The attached image was much smaller... it must have been added to since then!

Can you, great puzzlers, figure out how these pieces go together so we can fix the Mosaic?

Bonus Question: Can you explain what's being depicted here? What might the mosaic look like after the next addition? 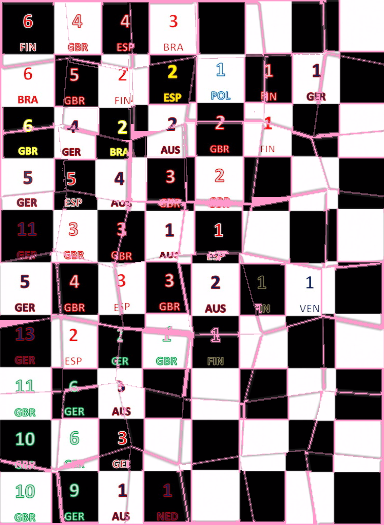 I doesn't look as pretty as before, unfortunately.

I don't know what the mosaic means. The checkerboard design hints a motor racing, probably Formula One. The title "Raikarting" and the initials KR hint at Kimi Räikkönen. The racing records at the bottom of the Wiki page look like the moasic where the country abbreviation denotes the venue of the race and the number the final position.

But since this is Puzzing SE, the numbers, colours and countries could mean something else entirely. :)

I think I can confirm the answer to what the grid of @M Oehm means.

Checking the last row, we see:

This is last year (2016) Formula One race winners, records like this:

Not the answer you're looking for? Browse other questions tagged knowledge jigsaw-puzzle or ask your own question.

7
Slumdog millionaire (6)
9
The unsolvable puzzle (a colorful and challenging jigsaw 2.0)
12
Slumdog millionaire (11)
10
Build your own™ Dominosa!
7
The Piece in the Corner of my Jigsaw Puzzle
7
The “Three Diamond” Distilling Company
3
Anime guess Riddle #4
18
I can't remember what I was doing last night
3
Weren't we supposed to know more of the story by now…?
14
a difference of 29°