(This was retrofitted to more tightly match a surprise solution and to allow for another puzzle with the original intent.)

Reflexivity — When the self refers to itself.

Above is a simple polygonal region divided into infinitely many different-sized copies of itself.   Each copy is √2 = 1.414... times as large as the next smaller one (in terms of linear scale, not area).   If 2 copies are removed, the remaining polygonal region is a scaled-down version of the original.

Can you find another simple polygon that has 4 or more sides and can be divided into infinitely many different-sized copies of itself, where the original polygonal region is geometrically similar, without reflection, to what remains if 2 or more component copies are removed?

The open-ended goal is a maximum successive-size ratio as close as possible to 1.

Reflection is not in play.   Each copy size occurs only once.   Polygons in this puzzle have finitely many vertices.   Note that the goal is to minimize the maximum, not average or smallest, ratio between any two successively sized copies.   The large composite polygon is not included in these ratios.

I have a solution with area ratio

and hence side ratio

Here's how it works. 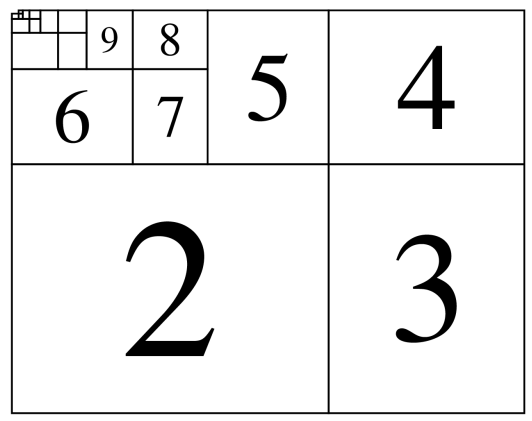 Numbers indicate exponents of $u$.

Gareth McCaughan’s surprise solution is laid out with the clear purpose of clarity, but a spiral form of it is too interesting to leave unnoticed. 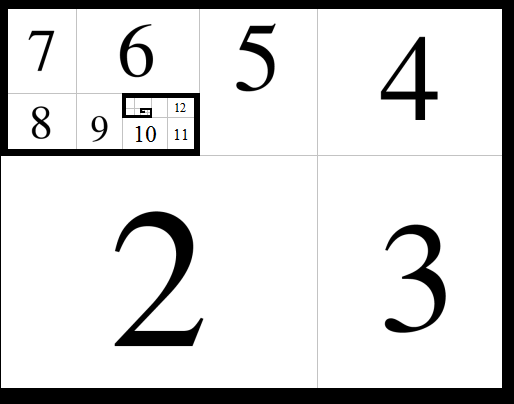 How it nestles two levels horizontally for each level vertically can tickle anyone familiar with the same old spirals of these two classics.

OK, so I think humn needs to show me what's wrong with the following argument.

[EDIT: no, I don't think he does; see the end. I'm leaving this here in case others are inclined to make the same mistake as me, or merely enjoy seeing me make a fool of myself.]

Theorem: In such a configuration, the maximum ratio of areas is at least 2.

Before proving this, here's an

Observation: the area of the whole polygon equals the sum of the areas of the smaller scaled-down ones. (Proof: the larger is dissected into the smaller.) And hence a

Lemma: In such a configuration, the areas of the smaller polygons form a discrete set; they don't "accumulate" anywhere other than at zero. Proof: otherwise there would be infinitely many of 'em with area $\geq t$ for some $t>0$, which would mean infinite total area, contradiction. $\square$

Hence the following Corollary: the maximum ratio of linear areas is at least $\sqrt{2}$. Proof: it's the square root of the maximum area ratio. $\square$

So, humn, would you care to clarify what careless assumption I've made? E.g., are you actually permitting the smaller polygons to overlap? Or are you considering "polygons" of zero or infinite area (but intermediate side-lengths, by some sort of fractal trickery)?

(If you prefer simply to indicate that you have fully understood what I wrote above but that you continue to maintain that there is a solution achieving a smaller maximum area-ratio, leaving it up to me to figure out what the hell I've done wrong, or indeed to ignore this completely, that is of course within your rights.)

[EDITED to add:] Oh, wait, I think I see what I missed. You say "the large composite polygon is not included in these ratios" so I am not entitled to assume $a_1\geq1/\rho$. D'oh.

10
Polygon wrapping a cube
8
Tiling an Odd Polygon with Dominoes
12
Ernie and the Revisitation of the Aunts
11
Another dissection puzzle
4
Infinitely simple polygon solipsism
3
Polygon neighbors
3
Which polygon is the one?
0
Number of turns a coin makes going around some other coins
2
1 lion, with a zebra and a fixed enclosure
9
Ernie and the Cuboidal Crystals