Another alien message, but from where?

"Alright everyone. After your great success decoding the stone tablet, we need your help with another message. We picked up a long sequence of radio activity and we're sure it's a message from aliens."

"However, we don't know who sent the message. That's where you come in. Your mission is this: decode the message and figure out where in the great wide universe this message came from. Good luck."

You don't need a telescope to see the star it came from.

Rejecting my previous answer as incorrect, the parameters determined by 2012rcampion are a close match for the Solar system (as in OUR solar system).

Hence, the origin of the signal must be the Earth.

This is only the first step.

The message has 3589 symbols, either dots or dashes. These symbols can be arranged in a 37×97 grid, which looks promising:


I've replaced the dashes with hash marks for clarity. (The message could also be represented a black-and-white pixel map.)

... looks like the definition of numbers and the sketches below make use of these numbers. The numbers are a bit pattern in a 2×3 block: The top two bits are always set to mark the glyph as a number. The middle row are the 1 and 2 bits, the bottom row are the 4 and 8 rows.

yielding the equations: The last sum 11 + 11 = 0 might suggest that either overflow isn't handled or that that the arithmetic is modular. (But modulo 22 would require more digit glyphs.)

... of the power equations probably has something to do with representation of rational numbers. The big 10×10 square is labelled 10 ^ 2.

The message as an image, based on M Oehm's answer: 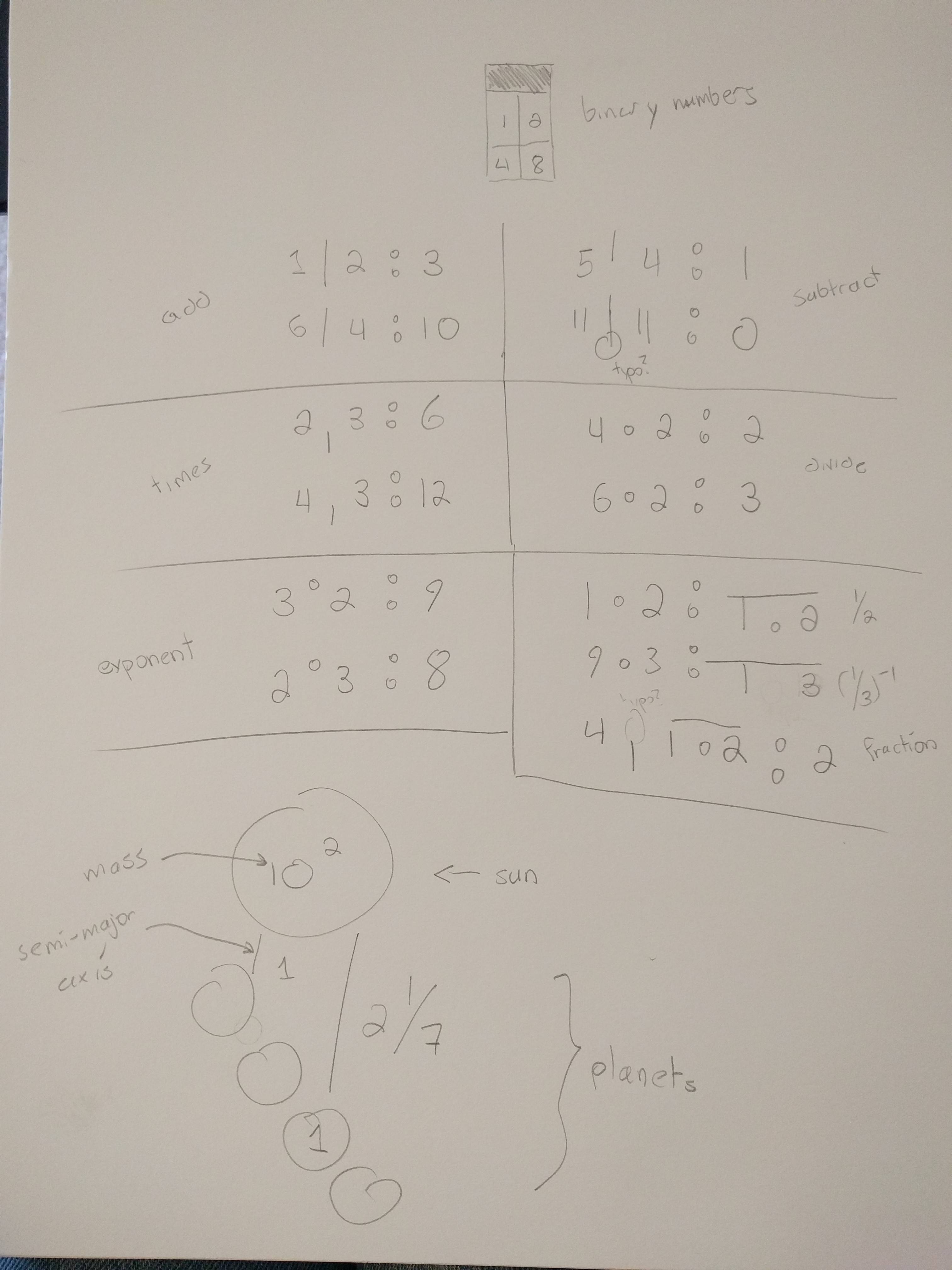 * The top section counts up in binary numbers from 0 to 11. It's similar to the numbering system in the Arecibo message.
* The next six sections describe some mathematical operators. In order, they are addition, subtraction, multiplication, division, exponentiation, and fractions. There's a typo in the subtraction section, which has an equation that reads $11+11=0$ instead of $11-11=0$.
* The bottom section describes a solar system with four planets. The sun is 100 times more massive than the third planet (so the planet is likely a gas giant), and the ratio between the orbital radii of the first and third planets is $2\tfrac{1}{7}$.

Assuming that 2012rcampion correctly determined that $2\frac{1}{7}$ is the ratio of semi-major axes, I will propose my best guess of the system of origin for the signal:

This is the closest match I could find in the Exoplanet Archive.

My next best guesses would be Kepler-24 and Kepler-215.

This is a canonical answer to explain everything in the message. This explains the fixed version. The fixed errors are as follows:

There are 3589 characters in the message. 3589 is a semi-prime number (37x97). This means if you try to arrange them in a grid, there are only two ways to do it evenly. As it happens, the message starts with 37 dashes in a row.

By arranging the message like that, you can see a pattern emerge. This pattern can also be shown as a black and white image (dashes are black pixels, dots white pixels), as follows (scaled up 500%):

At the very top of the message is a sequence of 12 2x3 symbols. These symbols are the numbers 0 through 11, as shown by the bars below them.
Each number symbol has the top two blocks filled in. From there the remaining blocks count the value of the symbol in binary starting at the top left, as follows:

Below the numbers are some equations, using the following 1x3 symbols: The actual equations are as follows: To the right of the exponents are fractions. A fraction is shown as a large bar over a division problem. I will put brackets around them in this explanation. The problems are as follows:

Step 3: The diagram and the final reveal.

Below all of the math is a diagram of a star system. Four planets are shown in the system, as is the star.

At this point, looking at the numbers reveals that the depicted star system is the Solar System (as in where Earth is).

As Earth is in both equations and is known to contain life, it is apparent that the message came from Earth.

33
The Alien Message: What does it mean?

34
A mysterious email from Ryanair
4
A mysterious signal from space
7
Lost In Translation: Hard Mode
10
Vixens and Fowls
13
How many fingers do the aliens have?
6
The Mystery of Lake Laberge
33
The Alien Message: What does it mean?
7
An unknown message from an unknown world