How did he count my money so fast?

When I was in college, each semester there were companies that would buy back your used textbooks. One semester I brought my books to the book-buyer, who said "We'll pay you $41". He grabbed a thick stack of one-dollar bills and, with the thumb of his other hand, "buzzed" off a stack of them in about 1 second. He handed them to me. Sure enough, there were 41 one-dollar bills in the stack! 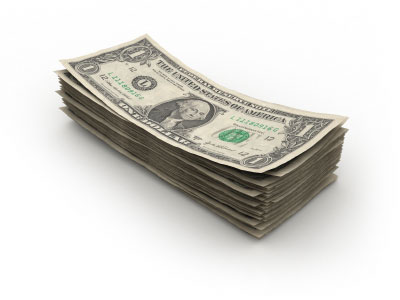 It took me a year to figure out how he did it so quickly. How did he do it?

The bills were new.

He had gotten them

fresh from the mint/bank in printed order

so that he could easily count the

Serial numbers on them

This was actually done by

Simply counting and pre-bundling dollar bills in stacks of seemingly random amounts such as 41. The buyer would then name one of those numbers as his quote for any book that reached his counter, grab the corresponding stack from his drawer, and buzz through it as described above to create the illusion that he is an extremely proficient money-counting machine.

Why the effort, you ask? Well, the buyer obviously

hoped that his little stunt would one day be noticed, admired, and eventually recorded in the annals of history via sites such as this one.

Suppose the bills are

in "sub-stacks" of, say, 10, each stack slightly sheared so that a small thumb movement releases 10 bills at a time. (For an exaggerated picture of the geometry I have in mind, imagine a vertical stack of Zs.)

"count" off four blocks of 10 almost instantly, and then change the angle of "buzzing" to get one more bill. He'd have been markedly slower if he'd been paying you \$49 instead of \$41.

(I don't find this answer terribly convincing and suspect there's something subtler afoot.)

If the value of the book would always be 41 dollars you could precount your stack of 41 with the last bill facing the other way. when you thumb through and encounter the backwards bill you know thats the 41st bill. This isn't the accepted answer but something I actually did when I was a teller.

Don't banks give any assortment of bills in totals of 50 dollars? It'd be easy to skim through them until he saw nine left and then hand you the 41. Especially if he is working there and and is handling those 50 stacks often, it'd come pretty quickly to be able to do that sort of thing.

I tried this myself, and it's much easier with clean bills that line up.

He counted them by ear.
By flicking through each of the bills from top to bottom (buzzing), he can hear each note as it flicks off his nail. Then, due to the amount of practice he has with this, he knows about when to stop. Like someone counting the number of shots from a machine gun.

This isn't a very creative answer but I'll share it anyway.

The notes were somehow partitioned into groups of 10. For example each 10th one had its corner folded in. Skip to the 4th one with the corner folded in and add one more, you've got 41. Alternatively, a little piece of paper (like a post it note) could be used to partition the notes.

A dollar weighs one gram, maybe he had a balance ? And it showed 41 grams.

Not the answer you're looking for? Browse other questions tagged riddle lateral-thinking or ask your own question.

6
To be a bookworm
16
The Square's Center
25
How did the man hang himself?
11
Diary Entry - A Tale of Torture and Abuse
27
How did Alice and Bob die?
8
The Boy of Fire: The Final Battle
5
Did Grandpa count correctly? Another Grandpa Mystery