How to rotate a projected image 90 degrees

In film school, I wanted to project a film of mine in portrait (vertical) orientation rather than landscape (horizontal) orientation. However, my film professor told me that the projector couldn't be tipped on its side; oil in parts of the projector would drip over the film and onto the light, possibly making it explode.

How did I rotate the projected image 90 degrees without tipping the film projector? 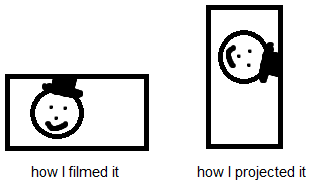 Here is a way I think would work.

5
Not a Riddle, rather a Question

12
Find the secret word in this encrypted image (part 2)
8
What is the fault in the Image?
5
Find the next image in this abstract reasoning puzzle
8
How can I win without knowing how to play?
2
How are both correct?
4
Which image should replace the question mark?
2
What concept does the image symbolize?