I found this puzzle from an old issue of a science magazine জ্ঞান ও বিজ্ঞান ("Knowledge and Science")(August, 1977); submitted by Amal Dash, a teacher of Scottish Church school, Kolkata; as mentioned in the magazine.

Incidentally; the answer wasn't published there.

The original publication did not contained any sketch. I've added a few to make it easily readable.

A wheel has an outer radius r1 and an inner radius r2. The wheel is rolling on a floor.

Before the wheel was being rolled, the topmost (from ground) point of outer margin (dot A) and inner margin (dot B) was marked with color dots.

After rolling; the wheel was stopped in a situation, when the 2 colored dots came upwards. So, in the mean-path; the wheel turned complete (integer) turns.

But if so; since we can see after complete turns the point A and B came to similar orientation as initial, and so dots A and B shows same shift from their own initial positions in horizontal direction; so 2nπr1 should be = 2nπr2; ie. r1 = r2 . And we know very well that r1 ≠ r2.

So, where lies the fallacy? what was going inside the circle? 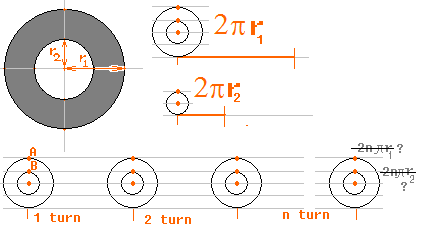 This may be a better question for the Math SE. Having said that ....

The fallacy is that the inner circle is not tracing out its own perimeter - it's along for the ride. You can see how quickly this breaks down if you consider the limit as $r_{\small_2}\to0$ that if both circles were independently moving $2n\pi r$ for their respective radii, as suggested in the fallacious argument, that this would leave the center-point of the wheel essentially motionless while the outer rim of the wheel moved as expected—a clearly nonsensical situation.

No different answer than User@Rubio; but a little bit graphical addition.

For me; the fallacy was a subconscious illusion that, as-if the wheel's movement does not depend upon which portion of it is touching the ground or track. Such as; as-if the wheel should have same movement whether it run as in OP or as in Fig.4 of following diagram. But that is NOT. And the best way to clear up this illusion is; to visualize and compare the Cycloids generated by the different spots on the wheel. In the following diagram (fig. 1 to 5); I did a try with simplest mensuration formulae and MS-Paint, considering r1= 40 pixels and r2= 20 pixels (as shown by horizontal and vertical ruler of ms-Paint on maximum zoom). In fig 2 and 3; I took 8 successive configurations (each differ 90 ° rotational phase). (In fig. 5 actually more samples were required, but not shown to keep the diagram readable.) . In each situation; at first the path moved by the wheel per 90 ° rotation has been calculated, and on that interval the wheel is repeatedly pasted. 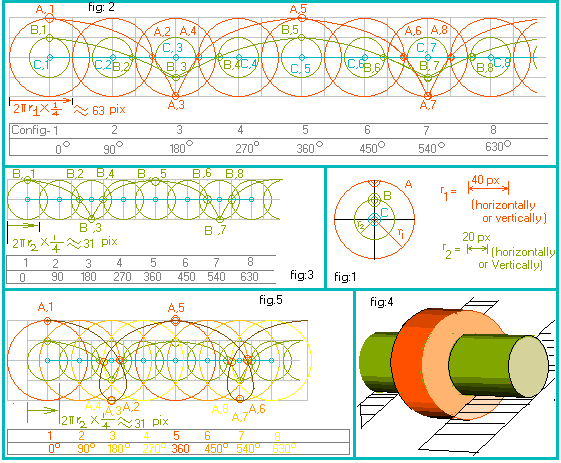 The point B in Fig. 2 (Like OP) and fig. 3 (where a wheel of r2 radius, is running); are generating 2 different cycloid path. In Fig-1 the cycloid generated by B is horizontal-direction much more stretched, that is eating up that extra length. Fig. 6 Shows another condition, if the whole wheel (with point A and B); could be run on the inner circle (as in Fig. 5) we would get the same cycloid as Fig3 for inner circle; but for point A, a more special cycloid found, which is loopy and compressed (along horizontal direction) than that of fig.2. In Fig. 5 The colour variation (red to yellow) in larger circle is to cleanly trace the looping-back.

P.S. The use of ms-paint curve-tool done much on eye-gaze. so certainly there exists error. However all sorts of suggestions and criticism are welcome.

This is better understood if you first consider what is happening to the centre (I'm British, hence the original spelling) of the circle. Applying the $2 \pi r$ approach clearly doesn't work here as the circumference of a circle with no radius is zero. However, the axle of a wheel on a vehicle moves without describing any curved path.

Similarly, the point on the smaller circle is moving - partly owing to its placement on a rotating body and partly owing to the movement of the whole wheel - the contribution of which is seen by the axle's movement.

7
What is the fewest number of clues on a rotationally symmetrical sudoku grid with a unique solution?
3
Paint the Rectangle with least number of Circular Stamp Touches
12
Ernie and the Thrones of the Aqua-ant
12
Ernie and the unfair division of the dessert
5
Cover 3*2.6 rectangle with the least number convex polygons cut from sheets of given size 1.2*2.4
1
Is this six different views of the same block or is there a consistent view with 1 or more that is 'odd'
3
10x10 divided into the most number of rectangles of different area
6
A square in the plane with 4 vertices of the same color