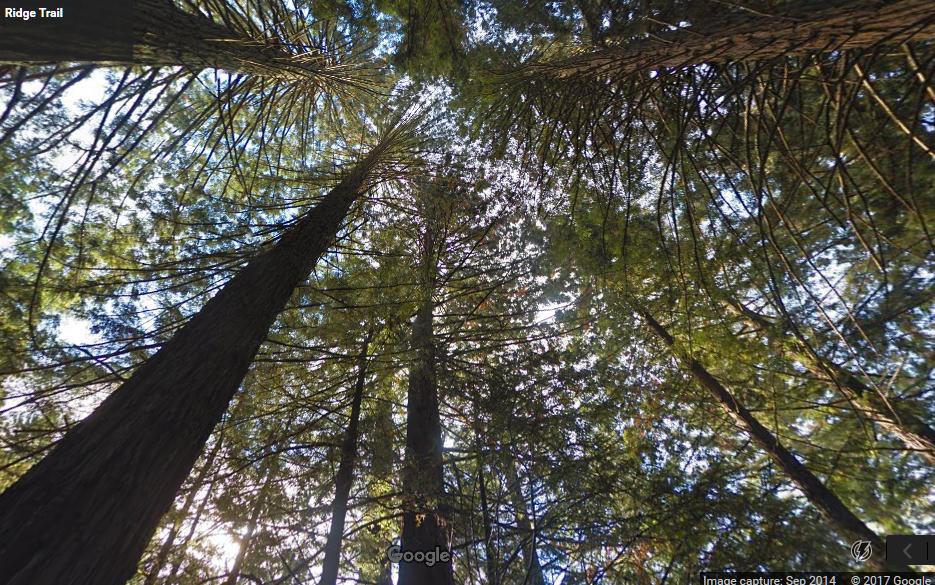 (click to visit this picture via Google Street View)

The weather was less pleasant than pictured above but the afternoon began nicely enough that I wasn’t about to waste an hour already traveled to Ridge Trail.   Along an open stretch of trail, an incoming cloud dominated the vista. It tumbled in as a dense fog with the mildest perceptible drizzle.

No problem, I’ll just go wait under those trees over there until the cloud passes.

Things don’t always work out quite as planned.

The drizzle became more intense under the canopy while, oddly, the trail remained dry along uncovered spaces between trees. These dry intervals were about 10 meters/yards long and the trees were 30−50 m/yd tall with branches spanning 10−15 m/yd.

Could this fog be so saturated that the trees are condensing moisture more rapidly than they can absorb it? After all, extracting moisture from fog is a fundamental survival mechanism for redwood trees, but I had thought they absorbed it directly through the bark.

Perhaps the mechanism works more by dropping condensate to be absorbed by roots. If so, I might as well proceed with a planned climb because the tree top will surely be as dry as those trail intervals.

Not quite. On the way up, the drizzle became downright rain, actual rain at the tippytop. So right on down I returned.   Along the descent, the rain eased to a drizzle again as if shielded by branches above. The situation began to make real sense for the first time — or so I thought.

Guess what.   Those spaces between trees, so intriguingly dry earlier, were...

Up and down, forward and backward, after a busy wet half hour I was convinced that the situation was real. Rainy atop the trees, drippy beneath — dust dry along the trail between them.

Only upon returning to the original open area did the situation, and weather eventually, become clear.

What did I discover at that open area?
Why did uncovered spaces between trees remain dry?

All factors in play have been mentioned in some form. This phenomenon occurred at varying altitudes.

I'm thinking this is what happened: 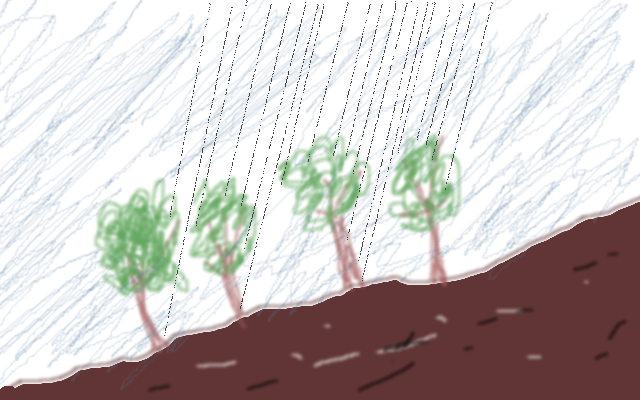 It's a ridge trail, and a climb is explicitly mentioned, so an incline seems a safe assumption.
Any amount of wind would make the rain fall at a slant, which wouldn't be at all unreasonable to assume either, particularly in light of how the "incoming" cloud is said to have "tumbled in".
The combination causes the rain to hit the tops of the trees, and only get through them at enough of an angle that the rain that reaches the ground does so near the next tree rather than in the open area between trees.

@Jesse seems to have already done numerical analysis for what would be required in the absence of my first assumption, but I suspect both factors are at play here.

What did I discover at that open area?

As a guess, you discovered run-off water flowing downhill through the clearing, highlighting the fact that it's on an incline.

At a minimum, you discovered that the ground in the middle of the presumably much larger open stretch of trail was, unlike the other smaller clear intervals between trees, quite wet—there was no magic keeping the treetops wet and the ground dry. So there must be a reason why short gaps remain dry while this larger one does not; it's not a long hike from there to figure out why.

Why did uncovered spaces between trees remain dry?

wind (about 1.8m m/s)
The spaces between the trees were leeward. For a rain drop to hit the ground, since it is pushed approximately wind speed, it would need to move laterally a significany distance. Around 1.8m/s of lateral motion would make the streaks about 10m long, given an average raindrop speed of 9 m/s

The spaces under the tree were dizzly because

The trees acted as a backstop, the wind constantly bouncing the raindrops off them (and also producing effects that kept the wind from being as effective, but I don't know the fluid dynamics well enough to describe that.)

What I think happened:

The fog condensed on the leaves, as the tree was warmer than the surrounding air because of the sun heating it up earlier in the day. Note that fog does not rain (otherwise it is not fog).

As the condensed drops dropped off the leaves of the tree, they fell to the ground underneath them (so under the tree).

Away from the trees, where there were no leaves, no water would have fallen. However, under the trees, all the water would fall. This is also a common phenomenon after the end of a rainstorm - under a tree, traffic light or power lines/poles are the worst place to keep dry.

Not the answer you're looking for? Browse other questions tagged situation real or ask your own question.