Once upon a time, a little user named Solvilocks tramped into the woods and happened on a house with three puzzles cooling on the windowsill and nobody home.

What would the puzzle say next?   (And why did it say everything else?)

All relevant information is only in what the puzzle said. Everything else includes just one weak hint and a red herring.

It appears to me that

The messages are self-referential in that they describe the difference between the number of characters in the message itself and the line number (starting from 0). I can't explain the blank entries: maybe the setter didn't find a solution for those or it would make the puzzle too obvious?

For the lines marked with an or, the puzzle found more than one possibility. Take line 10: it's either "6 chars too many", which has 16 chars and therefore 6 too many, or "Just right", which has 10 characters, exactly what it should be.

The first thing to catch my eye were

the lines with an "or" in them. If the answer changes depending on what the answer itself is, then surely something self-referential must be going on.

Since all of the lines talk about character counts, that is the natural suspicion, and one can easily notice that the "or" points are the points in which the character count changes (either because of two digits -> one digit or singular -> plural).

As for the blanks,

I'm guessing this happens because there is no way to make a correct answer of the format "[number] chars too many", "Just right", or "[number] chars remaining" for those lines.

I do not like this because the rules as to what the puzzle might say don't seem so stringent at a first glance: it uses "no" instead of "0" in one of the lines, and the hint given in the community wiki uses "characters left" (if changing the wording is indeed illegal, that would be an evil red herring).

For the next line,

What the puzzle “said” can be grouped like this, with ors on the same lines.

From manshu:
I found a hint on OP’s chat profile. In about section, it says 181 chars remaining: 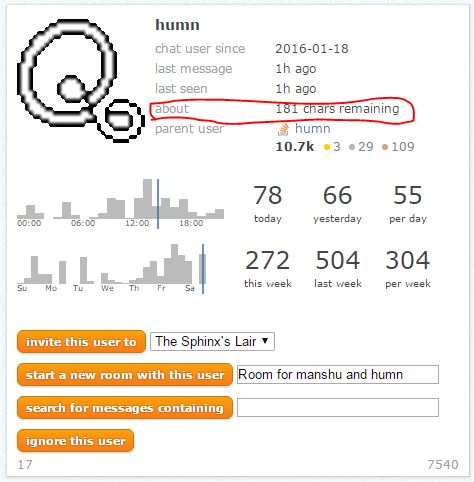 23
Very simple, yet unsolved, sequence of numbers
9
Complete the (alpha) sequence riddle
6
Matty mouse and Barry the bear
14
What is a Spanned Word?™
17
What is the link between these countries?
25
Insecurity to the Party
24
Puzzle: Who is the winner of the Great Puzzling Trophy?
5
A Circular Riddle
56
What makes an Interesting Puzzle™?
11
A Sergeant Sequence Sequel (fan-fic)