An endless loop in a desolate wasteland

You check your position tracker.

You look around. Pitch darkness. Nowhere to go except forward.

You pull a crumpled scroll out of your pocket. Perhaps today is the day you finally crack its code.

You reach into your other pocket and carefully pull out many small, rectangular scraps of scroll paper. Who perforates a scroll, anyways?

These scraps used to be connected to your long scroll. The scroll and the position tracker were the only clues you had when you woke up here in this endless expanse.

Wherever here is. In this dark expanse, on this endless sidewalk, with nowhere else to go but forward.

You rummage in your back pocket and pull out another scroll, this one much smaller. The one clue you found as you explored this vast land of nothingness. The one clue that you're sure will point to a way out of this place. 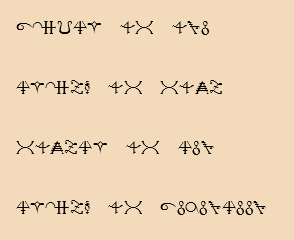 A way out of this place. A way home.

You reach into your other back pocket and pull out four other small scroll pieces, these torn from the much smaller scroll. This strange land and its perforated scrolls.

What drew you to separate the perforated pieces from the scrolls in the first place? How can you possibly get them back together?

Sixty. Sixty. The number echoes in your head. You stop and check your position tracker.

And here you stand, at the beginning.

You've been staring at the same text for what feels like forever, to no avail.

What does it mean? How can I even start deciphering it?

The mysterious symbols swirl and jumble in your brain. If only you had a key of some sort to start deciphering the text... unfortunately, it looks like the right half of the key has been torn off as well.

Hopefully the key is something easily recognizable. Perhaps even so easy that it can be identified with just the left half...

You spend a moment closely studying the symbols you see, then get back to counting.

Finally. Finally. After all this time, you've finally made some progress on this scroll. One by one, you're starting to piece together the fragments and get some answers.

Answers. But that's all you have. If only you had somewhere to fill them in... A grid, perhaps...

The answers to the cryptic clues are:

(Full details about the clues here, as well as some notes on some of the clues and failed extraction attempts.)

be formed into a loop of 120 letters so that the words go around the loop twice. (For instance, COMPOST is overlapped by INTERCOM and POSTURE.)

Now, the other scraps

are instructions for letters to look at. The second is the word number, and the first is the letter within it. They point to these letters:

Finally, we can get our answer by

Once you transcribe the symbols, you can form cryptic clues (as the tag suggests)

most likely by putting one of the scraps after one of the lines in the scroll. This is suggested by the combination of the line "The quick brown fox jumps" and the scrap "over the lazy dog", which when put together form the famous pangram.

It is possible that

all the scraps are definitions and all the lines are wordplay, although this is still a guess at this point. Edit: this turns out to be true

Figuring out the transcription

My first step was to look at

the symbols which could stand on their own, and which therefore would correspond to the letters 'a' and 'i'.

Then, I looked at

Continuing to look at

the two-letter words, there was another which ended in an 'o', and which began with a letter that could come after 'a' or 'i'. This forced the letter to be 'n', 's', or 't' as well.

we had two symbols out of 'n', 's', and 't', I looked at the three-letter words. There existed words which began with one and ended with the other, eliminating 's' as a possibility since there are no three-letter words beginning with 'n' or 't' and ending with 's'. This left us with two symbols for 'n' and 't'.

Turning to the clues,

I noticed that the last word of the non-perforated section had to be "seventeen", based on the letter patterning, giving us a whole bunch of letters. Then came the realisation that the last word in each line was a number, since we could transcribe "one" and "ten" with our new knowledge. Likewise, the first word in each line was an ordinal number. Transcribing the clues gives us most of the letters.

Turning to the scroll itself,

the first line read, "The _ui__ _rown _ox _u__s". Noticing that this matched the first half of "The quick brown fox jumps over the lazy dog", I filled in the appropriate letters. This gives us all the letters but one.

Then I set to transcribing the rest of the scroll.

I made the realisation that some of the symbols corresponded to punctuation, accounting for the 29 rather than the 26 symbols. The second-last line gave the symbol for 'z', the last remaining letter.

This gives us the whole translation.

Not the answer you're looking for? Browse other questions tagged wordplay cryptic-clues cryptography or ask your own question.