The Golden Bird and The Ocean

and it can easily reach the other side of the ocean without resting.

the speed of the ocean wind at that time must have been at least 1 mph in the same direction the bird was flying.

And hence the bird reached the other side of the ocean without resting.

This picture illustrates the point: 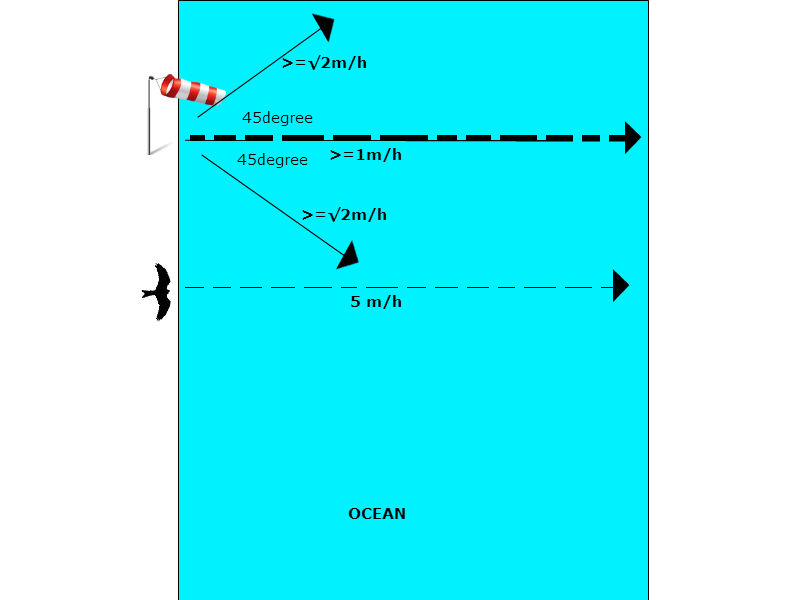 *Or greater than or equal to √2 mph to any angle not more than 45˚ from the direction of bird's flight. If greater than 45˚, it needs to be more than √2 mph, depending on the angle.

"The other side" meaning, "the heavenly realm" - i.e. the bird didn't make it across the ocean but died in mid-air.

While this particular ocean is 6 miles wide, its length is considerably less.

The golden bird flies without rest inside the cabin of an airplane or helicopter, which takes less than one hour to fly over the ocean.

1 Of course the cage is covered by a piece of cloth, otherwise air resistance would make this impossible.

And just for the record and for fun: The answer I originally wanted to give was the following:

The Golden Bird is obviously from a fairy tale (before I realized that it really was from a fairy tale). And as commonly known fairy tales do not happen on this earth, so they must have happened on another earth. And as commonly known other earths are not necessarily round, nor does gravity necessarily behave in the same way, so in this particular case the bird simply flew over the mini ocean that was located in a deep hole. 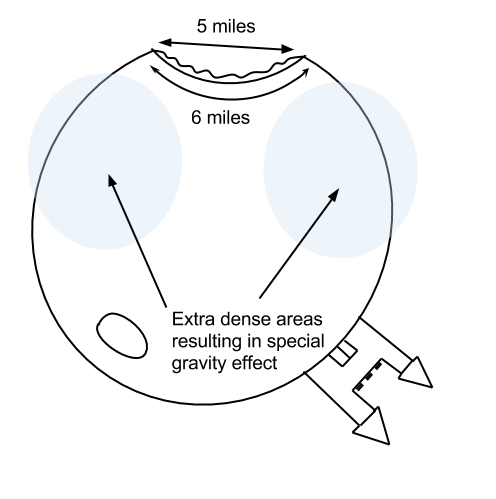 The bird is on a artificial small planet (gravity doesn't matter but lets say its artificially the same as on earth) it has only 2 land masses and a ocean, the two landmasses are a small island (where the bird is) and a bigger continent. The island is located on the ocean like so that its 6 miles away from the main land on one side and only 5 miles on the other side. So it just flies in the other direction.

The bird flies up, it doesn't go parallel with the ocean. When it should rest, it just falls down in the direction of the land side, so it falls to his death at the other side. But at least it's there.

Could it be that the Earth is round, so the bird just gonna fly in parallel with the diameter of the earth to reduce the distance to 5 mph.

Edit: Analysis to completely trashed this idea of mine.

Try this one on for size:

The bird is flying normally with 5 mph and it mades it to the other side of the ocean, because the water underneath is moving. For example, a high tide starting at the same time as the bird's flight and with development direction opposite to the bird's flight direction. If the high tide has a peak in an hour and the water displacement is about 1 mile, there you go, the bird succeded in its adventure.

None of the above answers satisfy the "that is the only way the bird can move" criterion.

EDIT: JUST THOUGHT OF A FORTH!

Well everyone has already answered all the good serious answers. The only serious one that appears to be missing is

or, to take the last answer to an even more annoying extream

Of course if we really want to be annoying we can start playing with pronouns and proper names:

yeah, okay sorry I got carried away there. I've had an image of an albatross in my head that I needed to get out since reading this puzzle! My apologies to all those that don't get the allusion. Lets move away from messing with names and pronouns, that's just too easy.

On its journey it gets hungry and looks for food on the back of a stationary whale for more than one hour.

The ocean is six miles wide only at its widest, or on average. It can be five miles wide or less at some other point, allowing the bird to cross the ocean at this narrower point.