Why does the 4x4 Rubik's cube have parity cases, while the 3x3 does not?

I'm a little uncertain as to why these two parity situations occur on the 4x4 Rubik's cube. The first parity case that can occur is this one, where an edge is simply flipped upside down: 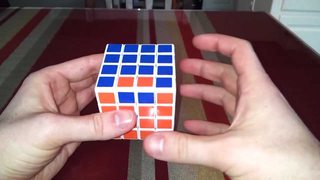 The second one that can occur is this one, where two edges are swapped:

Neither of these are valid positions on a 3x3 Rubik's cube. I've been told something along the lines of "hidden pieces are out of place," but this doesn't make much sense to me. If this is a reasonable explanation, what are those virtual pieces, and why do they have to exist?

The idea is similar with Rubik's cubes, though a little bit more complicated (only one in twelve of all positions are actually solvable, so there's more than just even or odd). Without getting into too much depth, you can simply think of the 3x3 cube being in an "odd" position because only one cube has changed, but the 4x4 cube is in an "even" position because two cubes have changed.

The key is that the four center cubules on each face of a Rubik's Revenge are indistinguishable.

When you do the move sequence to swap those two edges in the "3x3x3" phase of solving a 4x4x4 cube (or to flip a single edge or swap two corners), a bunch of the center cubules get reoriented, but you don't notice because they're all the same colour and rotationally symmetrical anyway.

A picture cube wouldn't have this problem, and thus it would be much harder to solve.

If you have a dry erase marker, number the centers 1-4 on each face. Then apply either your solution or your scramble, and watch what happens. The independent consideration of which center of the same color goes into which of the 4 available has something to do with it, as you alluded to. It's also why I wrote a 4x4x4 solving program to help me work things out I couldn't handle myself :) 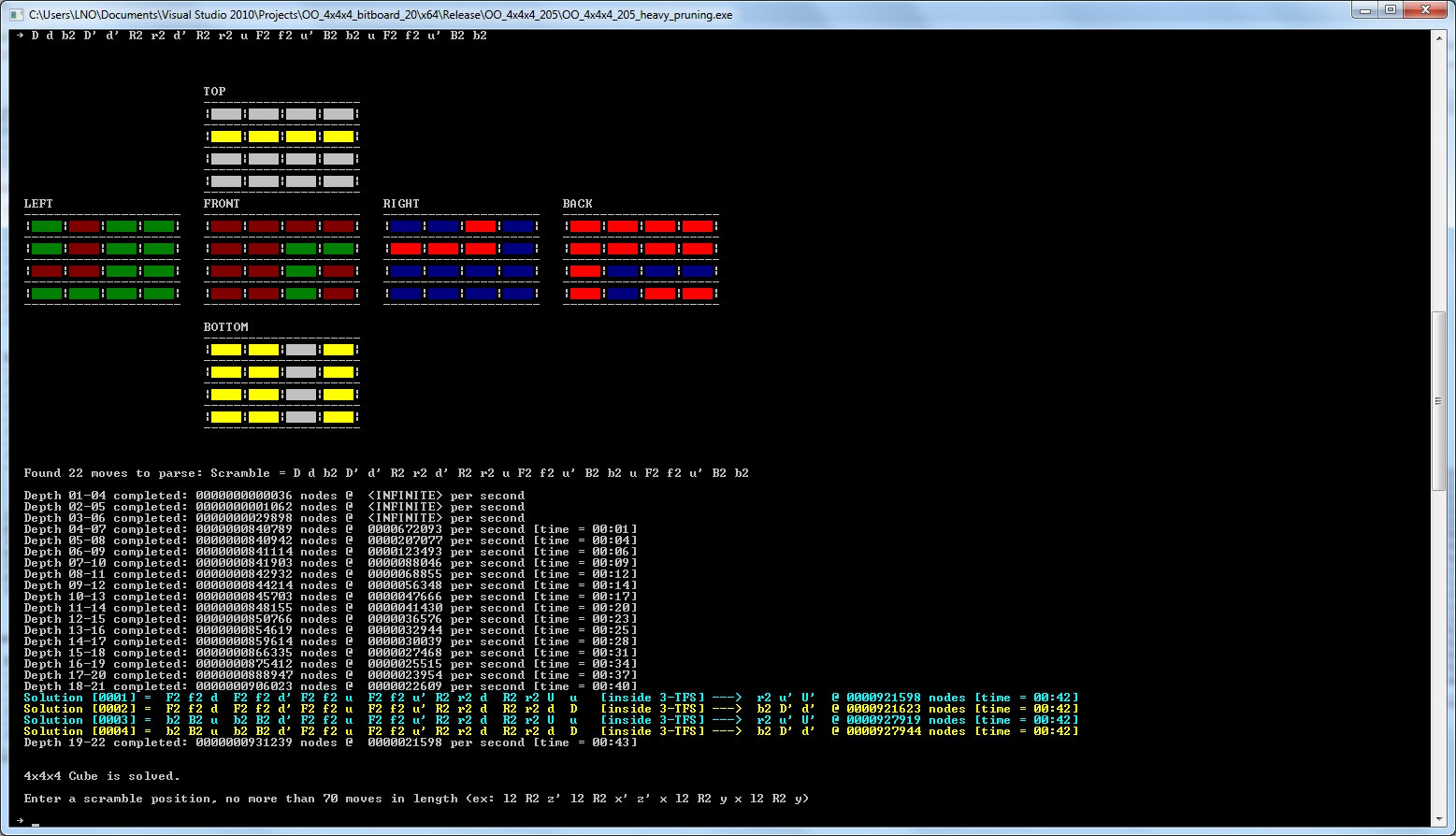 No mathematician, but from my experience, this is how I think of it:

1) It seems from prior work on the 3x3x3, that it is not possible to perform a simple exchange of 2 pieces without changing anything else.

2) This means that the simplest moves we can think of do 2 exchanges (meaning 2 edges exchanged and 2 corners, or 2 sets of edges, or 2 sets of corners). 2 exchanges is the same as a 3-way rotation. Think of a>b>c as: a/b exchange, then b/c exchange.

3) Now, transferring to the 4x4x4, all parity really can be explained (at least in my opinion) as: It appears we need to make a single exchange.

Thus, what we call 'parity solutions' really do just that - they make a single exchange of pieces - although often by making an odd number of exchanges.

My own personal "easiest way to see what is happening" solution method goes like this (NOTE - This is NOT fast on the clock):

A) Put centers in place. This is intuitive, and with a little practice goes pretty fast.

B) Place top edges. This is done by pairing the edges as you put them in place, and you have to take care to keep the horizontal center slices correct as you go. It's not difficult to see how as you work with it.

B) Place all top corners correctly. Also intuitive. (This is also the way I first solved the 3x3x3). This step is actually done the same as the 3x3x3.

C) Place middle layer edges (all 8). (There is basically one algorithm I need for this, with a reflection. And, it is really the same algorithm as is used in the 3x3x3 solution, with a slight modification to the 4x4x4 which is easy to see as you watch the move being performed.) The second slice pieces require exactly the same series of moves as with the 3x3x3, and the third is very similar, except that you have to grab an extra slice at one point, and then put it back later.

D) Place bottom corners correctly in place, and then orient. (Again, one algorithm, with a single conjugation for placing. 2 algorithms for rotation. And, these are the same algorithms as the 3x3x3.)

E) Place bottom edges correctly. Obviously, there are 8. I have not paired them yet, so I do this one by one. I do 2 opposite edges first. I need one algorithm with a reflection. It is an algorithm I made up myself, and it does a 3-way exchange. This is really the only NEW algorithm I need compared to the 3x3x3. And, sometimes it needs a quick conjugation.

EE) And, this is the step where 'parity' might be involved. Somewhere in this step I count how many exchanges of pieces I have to make. I want an answer of "even" or "odd." If the answer if "even", then I simply continue until I have all the edges in place.

EEE) If the answer is "odd", I have what is called a "parity issue". Since I try to work the edges by doing pairs together, and non-adjacent sides first, the last 3 or 4 pieces are across the face from each other. This leaves me a simple solution available for the 'parity issue': Since the offending edges are across from each other, I turn one inside layer 180*, then the face I am working with 180* (this effectively puts all 4 edges that I need to fix into the same slice), then the inside layer where all the edges are located 90* either way, then the face I am working with 180*, and finally the inside layer 180* again. So, if the face were on top, the algorithm might look like this: r2,U2,r,U2,r2. small r means the inside layer WITHOUT the right face. Think about what that move does: It does a 4-way cycle on the edges, and also 2 4-way cycles on the centers (which you can't notice, and I am not worried about yet). Thus, I am making an odd number of exchanges (9) and this solves the 'parity' issue.

EEEE) I now continue to put the edges in place.

F) Finally, if I had to do step EEE, then I need to go back and replace the 4 sets of 2 paired centers that were moved in that step.

Admittedly, again, this is not FAST. But I think it makes a great beginners method because most of it is exactly like the 3x3x3.

And, this lines up with what someone said further up: The parity issue is caused by how many interior layer moves you do, because those moves are the ones that do odd numbers of exchanges.

And, that is why the way to 'fix' parity issues on this puzzle comes down to simply doing one more odd turn of an interior layer.

For those who think in terms of 'hidden pieces,' it is possible to imagine the 2x2x2 block hidden inside of the 4x4x4 cube as "hidden pieces." If you choose to think that way, then the single turn of an interior layer actually does an even number of exchanges: 4 sets of 4-cycles. First, the 3 that I have been discussing, and then 4th, the 4-way cycle of the interior block pieces. As I say, I am not a mathematician by trade, but to me, this is an ok way of thinking about it. However, the group theory of the 4x4x4 cube does not 'require' this idea. The group theory of the 4x4x4 cube is simply different from that of the 3x3x3, because the interior slice move does an odd number of exchanges.

EDIT AGAIN: I revised my simple method above because I learned that you can start with the centers, and it goes a little quicker.

The first was a single dedge flip (OLL parity). When you are solving a 3x3x3 cube and get to the last layer, don't you often have to swap two corners/two edges? Sure. The same is true for the 4x4x4. A 4x4x4 has two inner layers which a related phenomena occurs. No mystery here.

The second was a two dedge swap (PLL parity). Assuming that you use the reduction method or one of its variants, you first solve the centers and then pair the dedges. Since the last step is to solve the 4x4x4 like a 3x3x3, we need to consider the properties of the 3x3x3 to see if our pseudo 3x3x3 matches it. The 3x3x3 cube law of permutations state that if the corners are in an odd permutation, then the (middle) edges are in an odd permutation, and vice versa. When you pair dedges, you define the dedge parity in relation to the corners. When you get a two dedge swap (or a 2 corner swap), you created a 3x3x3 edge formation whose parity doesn't match the parity of the corners.

The key is that the four center cubules on each face of a Rubik's Revenge are indistinguishable. When you do the move sequence to swap those two edges in the "3x3x3" phase of solving a 4x4x4 cube (or to flip a single edge or swap two corners), a bunch of the center cubules get reoriented, but you don't notice because they're all the same colour and rotationally symmetrical anyway. A picture cube wouldn't have this problem, and thus it would be much harder to solve.--Joe Z

For the two dedge swap (PLL parity), there exists algorithms which do not affect centers on any size supercube, no exceptions, and therefore if your statement was referring to PLL parity regarding same color centers, it is clearly always wrong.

Joe Z has it correct. Ultimately it's caused by the fact that some of the pieces are indistinguishable. I think tho he meant to say edge or center pieces not just centers only because of course in a 4x4 there are a bunch of edge pieces that look the same, not just the centers. In order to create what cubers call a "parity error" you need to move around some of the indistinguishable pieces either the edges or the centers.

Eric's answer is not totally correct. If you were mark the indistinguishable centers, to make them distinct, it STILL is possible on the 4x4 to have either PLL parity or OLL parity.

In other words, because the inner layer moves do an odd number of exchanges, it is possible on the 4x4 to exchange 2 edges and leave the rest intact.

As a side note, PLL parity is not really a parity issue at all. It only looks like it because we try to reduce the 4x4 to a 3x3. Actually, PLL parity in the 4x4 is a simple exchange of 2 pairs, and we don't think twice about that in the 3x3.

16
Is it possible to use one sequence of moves to solve the Rubik's cube from any position?
10
3x3x3 Rubik's Cube Illegal State