Below is a safe, requiring a four digit passcode. To find the correct code, all you need to do is follow the instructions. 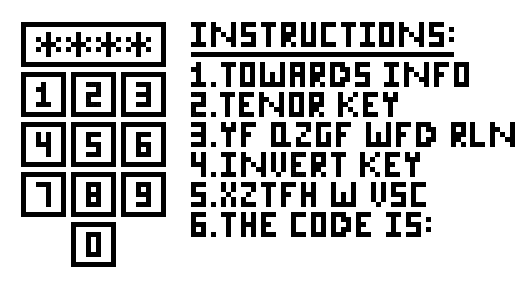 There was a lot of ciphertext underneath instruction six which read:

What 4-digit number will open the safe?

EDIT 2: This is a fault on my behalf, but due to the nature of this puzzle I can't change it now; when you have found the hidden instructions that relate to step 3, group the instructions so that you only get 4 pieces of information, not 8. Sorry!

The four-digit number is:

This answer is terribly out of sync with the puzzle's intended solution. It turned out that many of the steps can be skipped.

Only part of this solution is my own. I rely heavily on partial solutions given in other answers and comments.

... that there is hidden information in some of the letters.

Instruction 1 says "Towards info", which apparerntly should hint at the two 2's in the picture that guard/ward information. (The OP has explained that in a comment below.)
Instruction 2 says "Tenor" key. Decrypting the line below with the key TENOR doesn't yield anything useful, though. It turns out that (a) the key isn't really a key to the cipher below and (b) is a bit cryptic: Ten in Roman numerals is X, so the instruction says XOR key.

Using the key HOLISTICALLY as a Vigenère key for instruction 3 yields:

The instruction "Invert key" has the word "Lichtenstein" hidden in the first E.

... the long text message can be be decodes with the Vigenère key LICHTENSTEIN. It reads:

That, as the keen PSE denizen will immediately spot, is an URL on imgur. The last three characters and the file extension are given clearly: ..gsk.png. Apparently, the first two characters are two digits.
I'm not so sure about the roman numbers and the undead, but a bit of brute-forcing leads to the following image: 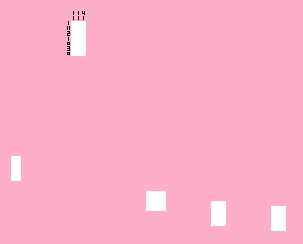 (Yes, cheating isn't fair, but once you've skipped some steps, you're already in the low-moral zone. Sorry for that.) The upper blank is a nonogram, as Mike Limburg has found out. Thankfully, he has already solved it: 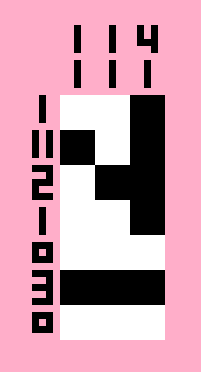 The black pattern in the nonogram is a detail from the original instruction image: It is part of the N in "Instrucions" which is underlined.

We can now overlay the pink mask so that the nonogram matches this N: 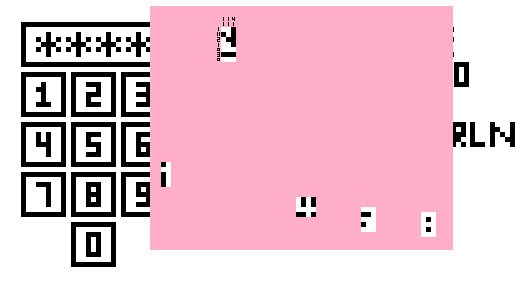 The four windows in the mask now show the combination for the safe, this time white on black. Voilà!

Helping with the steganography.

Jacking up the brightness and contrast yields this image: 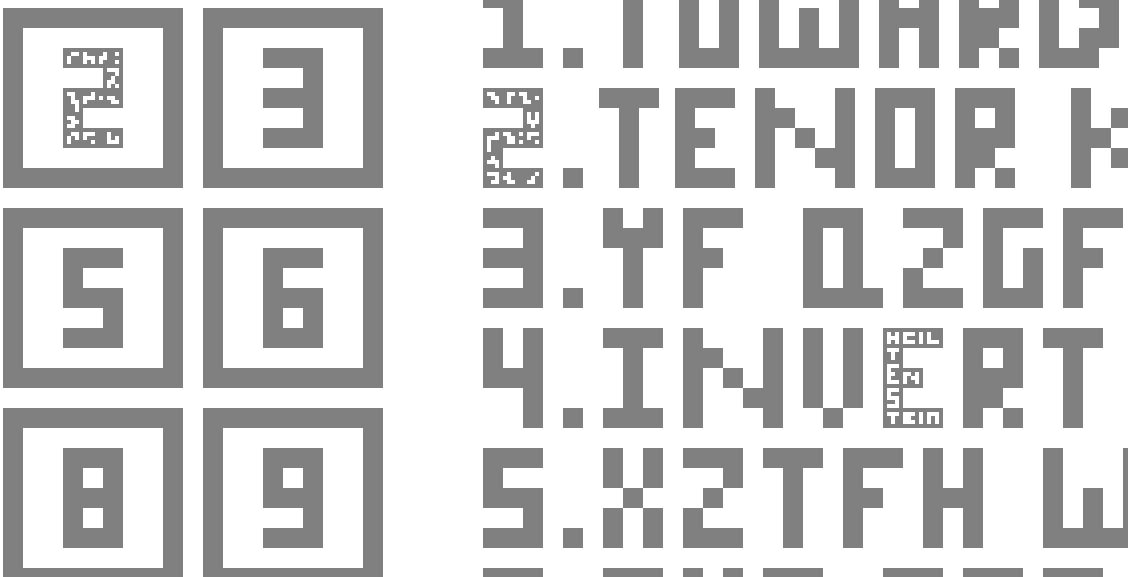 @Moehm has arrived at the correct code above, but there were a few things left out. For anyone interested, here's the stuff that happened in between! All spoilered, of course, in case there's anyone still interested in puzzling it all out completely.

...was correctly decoded as RR FROM ODD GAP. This is a step I liked a lot, so I was a bit sad that it was skipped (although that is a fault of the puzzle construction). It's another steganography step, but it's not to do with colours!
You may notice that the text on multiple lines of the instructions goes in and out of alignment, that is because not all the spaces are the right size. There are 5 pixels in a normal space, and 15 pixels in a normal gap between words. There are several spaces/gaps that are a pixel or two too short, and looking at the letters to the RR (right right) of these, we get O NW NE NE. This appears to be compass directions - and starting from the 0 on the keypad, we get 0753. Only after posting the question did I realise I didn't hint at this being 4 digits - and following NWNENE step by step also provided an invertible number! Oops. The edit 2 hopefully cleared this up.

When deciphered, reads THIRD E KEY. This is where LICHSTEIN was supposed to come into play.

Remember that weird '4' after HOLISTICALLY, in step 2? Holistically means in terms of the whole - so 'digit a whole number' is cluing '4'.
45 Roman right - you can clearly see 45 written downwards in the instruction numbers, and to the right of it is IX, which is suspiciously a Roman numeral! An undead creature is a LICH, and XX is Roman for TEN TEN. So what are the extras in LICHTENTEN? S and I, of course, to make LICHTENSTEIN! But we can't subtract S and I. Thankfully, they're indistinguishable from 5 and 1, so we get 9 - 5 - 1 = 3 for the second digit.
This clue is why I reposted the puzzle.

Hopefully that was a bit of fun to read and helps the pieces fit together a bit more. In any case, even with some steps being skipped, I hope this puzzle was still enjoyable!

Not the answer you're looking for? Browse other questions tagged cipher wordplay enigmatic-puzzle visual steganography or ask your own question.