Names have been changed to preserve anonymity

A group of 25 people, A to Y, arrived at Z's door to celebrate the family reunion. They each had something to show off.

Z: I know you're all excited to get in, but remember we've got we want to say to the community. To make sure you're all ready, I need you to finish this off. Then you can say what you want. (pointing to a group of people) You lot will always be important at the start, but (pointing to N and two others) you three will be needed at the end of everything. Now let's get started!

What was the message to the community? 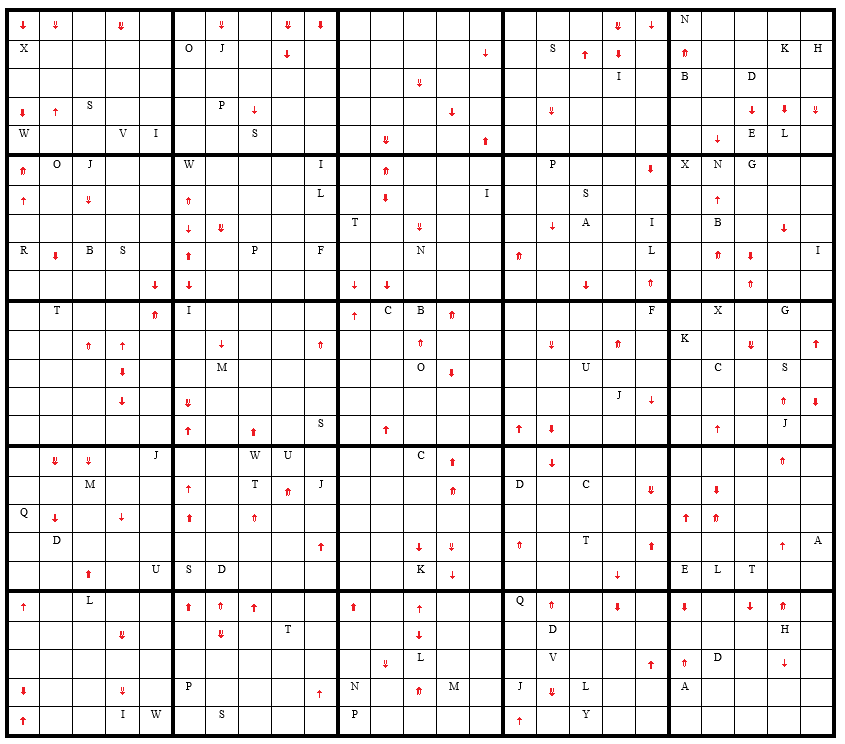 A lot of people have complained about not being able to distinguish between different arrows. If you click on the picture, you can see the image in high enough resolution to solve the puzzle.

Revisions 7 and 12 - Fixed sudoku - will not have affected your ability to solve the puzzle. The problem that was fixed did not affect any existing solution, nor should it have affected your solve path (unless you work strangely). However, it may be worth redownloading the image if you have a copy on your computer.

What are the different types of arrows?

The arrows do not form part of a cipher.

Note what comes first and last in the accompanying text - it's not pure flavour-text!

Specifically, at the start there a group of letters, (something in the middle), and 3 letters (N and 2 others) at the end.

Each 5x5 box can be done separately.

Apart from the problem statement and the image, where else could the next step be? (It is in a place approved by the Puzzling community)

The (something in the middle) of Hint #4 is represented by the arrows in each box.

Minor changes to the sub-puzzles (Only look at this when you've found them!):

Atypical rules of the sub-puzzles (Only look at this when you've found them!):

Moon-or-Sun - no alternating moon-sun rooms condition
Corral - the loop goes along the squares like in this small grid - http://i.stack.imgur.com/jyXRi.png

Read off the letters in each box, in Roman Numeral order, capitalized if the arrow points up, and you get 25 Imgur links. Each of these leads to a grid deduction puzzle of a different genre.

Solving all of these puzzles gives you either a letter or punctuation mark. Putting them together in the original order gives:
GOODJ
OBGRI
DDEDU
C-ANE
WTAG!, or
"Good job, grid-deduc(tion) - a new tag!"

More details here. Thanks to TheGreatEscaper, Volatility, and Alconja for the help in solving.

I didn't solve the sudoku, nor did I run it through a program, but in the process of copying it into an online solver (yeah, sorry :P) I noticed a pattern that is undeniably the intended solution of the sudoku.

Next, we've got to use the arrows. Possibilities are that they mean rot forwards/backwards by their tail width, or we look at letters lying on each arrow type, or both...

EDIT: I've also noticed that the arrows are actually Roman numerals. It's really tiny, and the letters are clumped together without any gaps, but I think this is definitely right.

Wrap-up: The Making Of A Family Reunion

This is my first wrap-up post, so much of the formatting has been 'lovingly adopted' from Rubio, to put it in their words. Please give feedback!

This proved to be too hard, because of the nature of grid logic puzzles having answers that also had to conform to rules. So I had to find another way to make it. Looking around here, I found the imgur-maze set of puzzles.

So then, how to encode multiple imgur links? The only obvious way was to have a grid-deduction puzzle with at least letters, otherwise it would have been too big for anyone to be bothered solving it. The obvious choice was a big sudoku.

To give the biggest range of letters, I chose a 25x25 sudoku. That meant I had to have 25 sub-puzzles, which I barely managed to find (a huge thanks to Nikoli for making so many grid-deduction puzzle).

I then had to choose a message to encode. No-one had really celebrated the new tag, but I was really excited about it. I had to fiddle with the message a bit to get it to fit, but the final message was GOODJOBGRIDDEDUC-ANEWTAG! (Good job, grid deduc. - a new tag!).

So then, I adapted a Python 9x9 sudoku maker that I'd made to make a 25x25 sudoku with as few clues as possible (to give me the most imgur link combinations later).

Then I set about making the puzzles. The main problem I ran into was over-constrained solution sets with some of the puzzles, and also not being able to find a reasonable way to display the letters. To make a multiples of 5 theme, all the sub-puzzles were 10x10 (in keeping with the puzzle type, e.g. Slitherlink was on the lines of a 9x9 grid).

So finally once I made all 25 sub-puzzles, all that was left was to upload the links and put it in the sudoku.

So, how to put the letters in, while showing case? The obvious choice was arrows. But I needed an ordering too. The arrowhead was the case, so the stem should be the order. And what looked almost like straight lines? Roman numerals! And that led to something that I also enjoy doing - pixel manipulation. To stay with the theme, the stem length was 5 too. To intentionally make the arrows look less suspicious I made sure none of them pointed off the edge of the sudoku.

Finally, I had the links entered into the sudoku, and I could post! Just a quick story to emphasize the point of using imgur, and I was done.

The 25x25 sudoku was the main brute-force part; luckily the way I programmed the sudoku maker left a pattern in the clues.

After that, of course, people hit a road block. I had seen other imgur mazes clued similarly, so I was surprised that no-one else saw the way through, especially with the text. Maybe people have been accustomed to not reading the flavour-text? Anyway, after putting a lot of clues, and a bit of nudging on Sphinx's lair, it finally came through.

Meanwhile, I put an incorrect image and three links were incorrectly clued, so I had to edit the sudoku.

On the day of solving, I learned that I'd uploaded images of the wrong document revision, and that I learnt non-standard rules :,-( , so I learned something too in the process!

Lovingly adopted again, this was a lot of fun (and a lot of work!) to put together. I wanted the lesser known grid-deduction puzzles to have a chance to shine even if briefly.

Finally, I did promise @Deusovi a collage, so here it is: 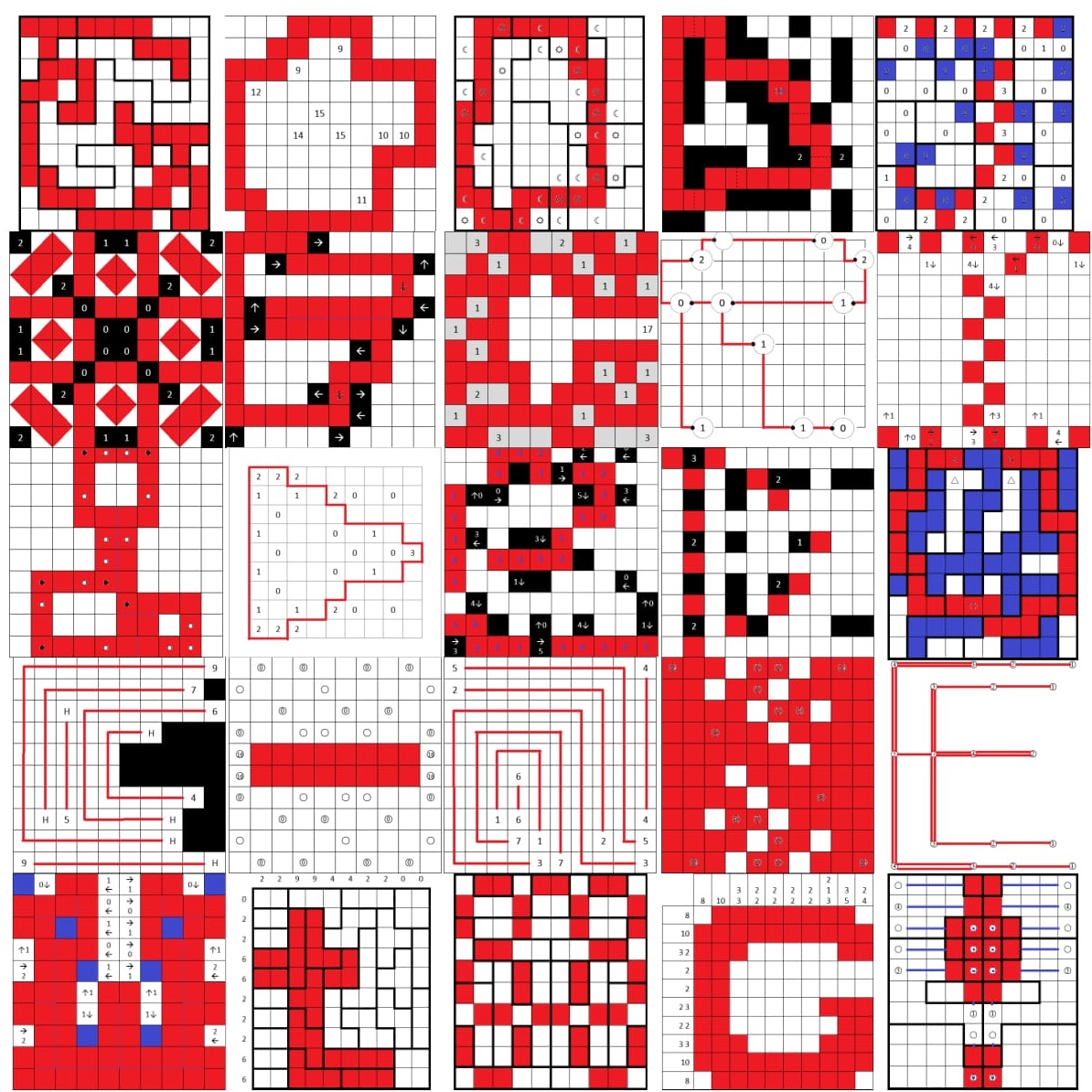 Not the answer you're looking for? Browse other questions tagged enigmatic-puzzle grid-deduction sudoku or ask your own question.

14
Write digits 1 to 9 in the table, each pointing to next 3x3 grid
6
Observation, observation
2
"Tell Your Friends" - a mysterious e-mail that landed in my inbox [Part 2 of 6]
8
Sudoku and guessing : theory?
15
You may not be eligible to be in this community
20
Square Spin #1: Sun and Moon
12
(2 of 11: Moon-or-Sun) What is Pyramid Cult's Favorite Camera?
9
A Sudoku with only four given digits and some more rules
4
Lasers: The Reflection (Level 2)
3
Lasers: Cross through the bridges (Level 3)