A Riddle of Successive Subtractive Sentences

All in all: out of bed! Time the morning to greet!
Minus one and the statesman is losing his seat.
Minus two: it's a hue or a kind of a smirch.
Minus three, in a way, nothing short of a perch.
Minus four, time to flee! Run away in defeat!
Minus five, a big rat a king's daughter might meet.

The answer is a single English word.

Added the trivia tag for the last line.

All in all: out of bed! Time the morning to greet!

Minus one and the statesman is losing his seat.

The statesman is OUSTed.

Minus two: it's a hue or a kind of a smirch.

RUST can be a colour or a smirch.

Minus three, in a way, nothing short of a perch.

ROST - one letter short of a roost.

Minus four, time to flee! Run away in defeat!

The fleeing army is in a ROUT.

Minus five, a big rat a king's daughter might meet. 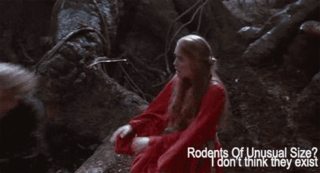 Excellent riddle. Once I got the right answer, pretty much everything fell into place perfectly; nothing else could have fit the clues.
I got the last line first (being a fantasy buff probably helped - I'd had that particular work in mind for a long time even when I was thinking the answer would be PEA), and then the second-to-last line followed quite easily as the two words are similar.
At that point I was confused, having assumed each line described a word with one fewer letter than the previous line. But the singular version fit better than the plural for the second-to-last line, and I had a niggling feeling that maybe the numbers referred to positions rather than numbers of letters. And when I tried this idea, it worked perfectly right away.

Not the answer you're looking for? Browse other questions tagged riddle word rhyme knowledge or ask your own question.

14
The Messed Up Family and the Lost Brother
24
Anagram Sentences
11
Birdies and Tigers and Bears, Oh My!
7
A Day in the (Not So Peaceful) City
18
The Imaginary Food Riddle
5
What are the 3 sentences hidden within the 3 sentences?
6
Falcon Circus, Prologue: The Twins
2
Yet another Riley Riddle
7
A Riddle of Riddles
4
Reena and the doors. How many?