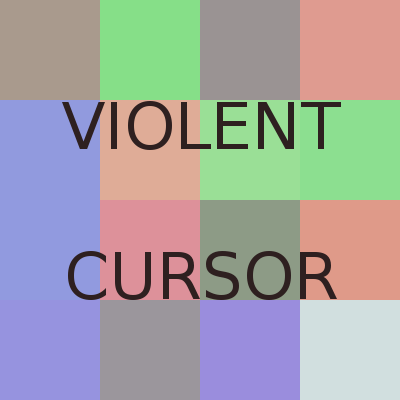 If you can't get anything from colours, try something else

... are an anagram of "invert colours". So we must invert the colours. For the hex values Beastly Gerbil has already helpfully provided in his answer that means we have to take #ff - x instead of x. (The hint links to the image of an anime character called Ana Gram. I needed the hint, which is a bit embarassing in hindsight, because I had seen that all the hex numbers are in a narrow range and are all greater that #80.)

Very well done! She is one "nerdy evil dicer".

I guess that her name is an anagram of "nerdy evil dicer". I couldn't find one, but Will could. He has found out the she is one very nice riddle.

(With the question in the title – "What's her name?" in French – I had somehow expected a French name.)

Not sure if this will help, but the colours make me suspicious..

The values of the colours are:

They don't give anything when translated to ASCII or hexadecimal and the fact there is no cipher tag, probably suggests this isn't helpful. But the colours are weird...

The cipher tag was edited and MOehm got that step

What is it called?

And a violent curser is well, violent, and a simply play on words changes

Violent to violet (the french word meaning purple), further, purple is the color taking the most of the grid in the background image.

Someone mentioned this in the comments, as well, I can't remember exactly who it was.

I am aware that this is supposed to be an answer to the puzzle, but since I don't have enough points to post comments yet, I'm posting this as an answer:

When translating "Elle s'appelle comment ?" from French to English, it's correct to translate it to "What is she called" or "What's her name?" since the two are used in English. However, it literally translates more correctly to

The version of "Herself" used in French doesn't exist in English to my knowledge, but the s' (before appelle) is short for "se", which can refer to both genders. A more precise translation of the french "se" would be the English word "self" alone.

Hope this helps somehow, and again: Sorry for posting as an answer - I hope I don't get punished for this..

EDIT: First attempt to answer the puzzle (a very simple one)

Merely answering "the question" with French versions of the words and a French word order = Elle s'appelle Curseur Violent.

Not the answer you're looking for? Browse other questions tagged cipher lateral-thinking enigmatic-puzzle visual or ask your own question.

8
Shifted symbol cipher
4
Hidden Message: Code and Calculation
6
Image steganography/ hidden message inside image
4
What is JonMarkPerry trying to tell us?
9
Making broken love smile again!
29
A piece of Colourful Language
7
How does this equation hold true?
12
A Trivial Diagnosis
18
Can you solve this Rubik's cube from inside of it?