You are given $N$ coins which consists of only $1$ fake coin. You also have a sensitive old-fashioned Pan Balance Scale. 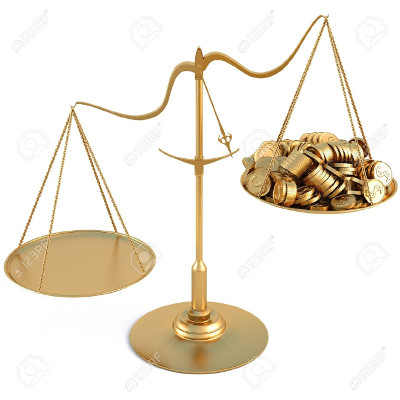 You are asked to find the fake coin in totally 5 times weighing on the Pan Balance Scale among given $N$ coins ($N>2$):

So, what is the maximum amount of coins ($N$) you can have which guarantees to find the fake coin in optimally at most $5$ tries on the pan in the worst possible case?

An algorithm for reaching Ivo's answer:

If you weigh 41 coins on each scale, and it tips left or right, then you have narrowed the fake coin down to one of the 82 coins you weighed. Since $82 > 3^4$, you cannot determine which is the fake coin in only four more weighings. Thus, you can weigh at most 40 coins on each scale in the first weighing. If you leave 41 coins out, then there are 82 remaining possibilities and that is more than you can fully distinguish in 4 weighings. But you can determine the fake. You don't have to distinguish all 82 states; you only need to distinguish the fake coin.

If any weighing after the first is not balanced, then you have narrowed the fake down to one of $3^n$ coins, and you know if it is heavy or light, and you have $n$ weighings remaining. From there, continually divide $1/3$ of that group against another $1/3$ to narrow it down to the fake coin.

If the first weighing did not balance, then you have narrowed it down to either one of he coins on the heavy pan is heavy or one of the others is light. 80 possibilities. From here, you need to narrow the possibilities down by factors of 3.

Fifth weighing: weigh 1H + 1L on pan A versus 2G on pan B. If the pans do not balance, you know which is fake. If they do balance, then the remaining coin is fake.

A naive upper bound is N = 243 = 35, since you must distinguish among N possibilities using 5 ternary tests. However, you can prove a better bound.

There are 35 = 243 possible outcomes of the five weighings, which can be represented as a string of 5 letters, each of which is L, R or B, for left heavy, right heavy, or balanced. The outcome you see is determined by which coin is fake, its weight, and which scales it was put on. For example, if coin 7 was heavy, and it was placed on the right for weighings 1 and 2, on the left for 3 and 4, and not weighed during the 5th, you would observe the outcome LLRRB. On the other hand, if coin 7 was light, you would observe the opposite outcome where L and R are interchanged, RRLLB.

This illustrates the fact that if an outcome causes you to conclude a coin is fake, its opposite must as well. Therefore, for each coin there must be two outcomes which cause you to conclude that coin is fake. The only exception is a coin which is never weighed, since this corresponds to the outcome BBBBB, which is its own opposite. This means there can be at most (243-1)/2+1 = 122 coins if there is a successful strategy.

To get the promised upper bound of 121, we have to be more careful. Suppose that the first weighing places K coins on each side of the scale, leaving L of them aside.

It surprised me a little bit, I expected it to be lower. I don't know the exact steps but it has been proven according to this that you can determine a bad coin in $n$ steps for a maximum of

Steps one and two

You have 24 coins. Split them into groups of 3 with 8 coins each. Measure group AvsB. If the balance is still, then the fake coin is in group 3. But this isn't the worst case scenario. We must assume AvsB results in a tilt to either side. So we measure AvsC. If they remain center and don't tilt, B has the fake. else A has the fake.

The fake coin and its type (heavier or lighter) can be determined from 120 coins by using the balance at most 5 times.

Not the answer you're looking for? Browse other questions tagged mathematics logical-deduction strategy optimization weighing or ask your own question.

5
Find the fake gold bracelet in the pile with only four weighings
-2
Reversed Weighings question
1
The n coins and the scales
0
How can you use a two pan scale to find which coin is counterfeited?
19
30 fake coins out of 99 coins
7
121 coins and a balance