Your brother has been forcing you to some read some of his frankly ridiculous poetry, so, knowing that he was never a numbers man, you decide to vex him with a Number Slope puzzle. In fact, you are so confident that he won't be able to solve it that you bet all your PSE rep on it.

The next day, as you work through one of your countless puzzle books, you find a sheet of paper inside. It's not another poem this time, thank goodness, but it is slightly concerning...

Thought you could defeat me with your pitiful numbers? Pah! You'll be soiling yourself!

What on earth is that supposed to mean? Why didn't he just send the completed grid? Or is he teasing you, hiding the solution in a puzzle of his own? Is all your precious, hard-earned rep now gone? What is your brother really saying?

The message, as well as the rule which provides the enumeration of the letters SOIL, have been correctly found. However, there is one more unidentified, intentional, confirming detail in the puzzle related to the additional letter. I will leave this question open until that aspect of it is found.

Edit: I have edited the image to provide a hint to the aforementioned detail.

To bare the mechanics of the self-inflicted insult suffered by our brother, as uncovered in TheGreatEscaper’s solution : 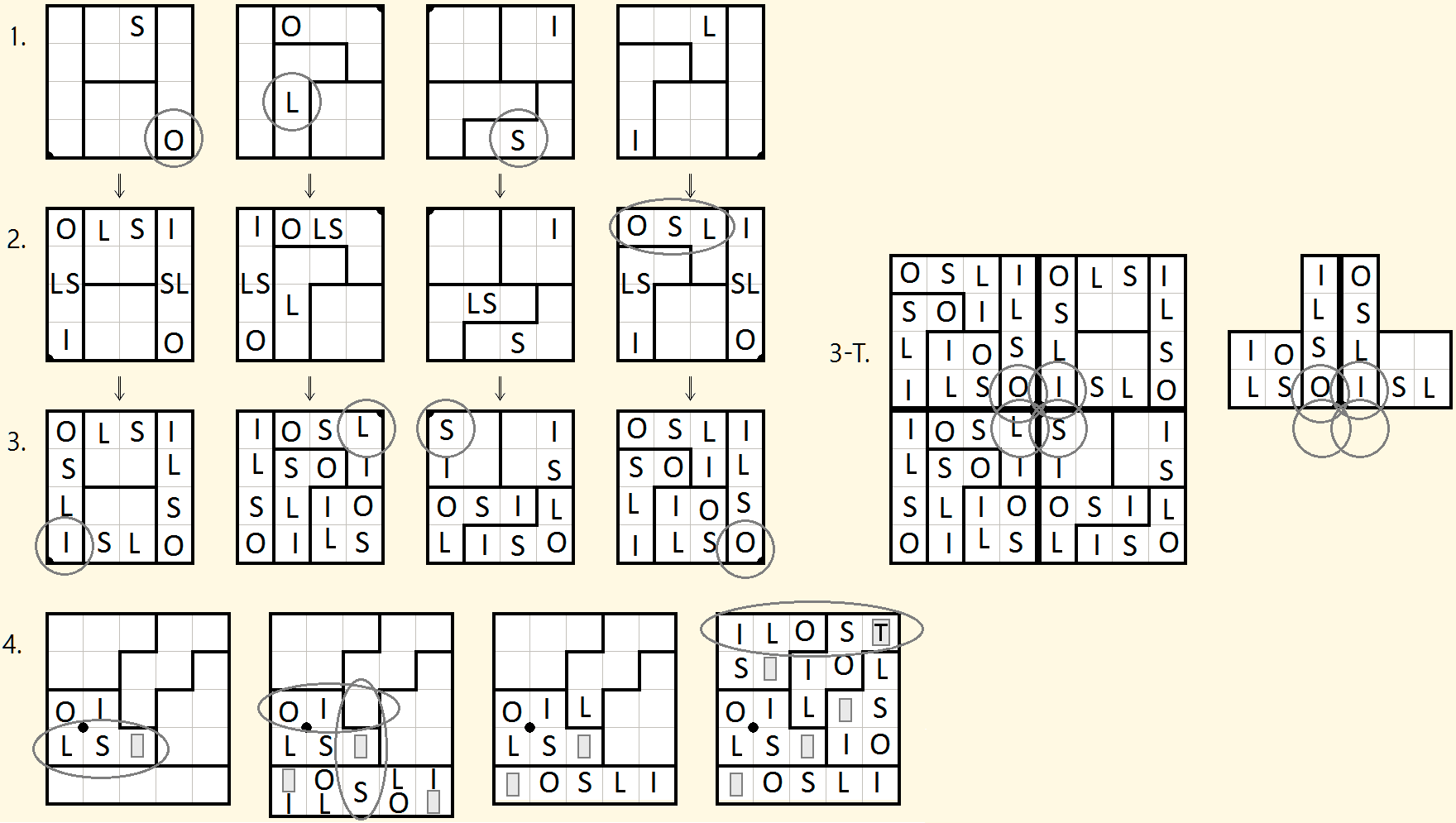 Row 1.   Taking the Number Slope™ puzzle hint assumes that S, O, I and L are equivalent to 1, 2, 3 and 4, in a consistent order observed within each set of linear squares within a tetromino.   The circled cells determine that O is 1 or 4 while S and L are in the middle. Thus I is also 1 or 4.

Row 2.   This is the direct result of that partial ordering. The circled cell group determines the order as O S L I or its reverse.

Row 3.   The 4×4 grids proceed to specify all but two inconsequentially ambiguous areas. Letters at dotted corners can now be copied to the 5×5 grid.

Row 4.   A new mystery letter ▯ presumably is equivalent to 5 in the order.   The circled subsequence L S ▯ establishes the complete ordering as...

The 5×5’s bottom row’s direction is unknown initially but S is in the middle either way.   This forces L into the center cell and the rest follows readily enough.   At the top of the 5×5 grid we at last see our brother’s embarrassing confession.

Why is the mystery letter T when E could just as well spell an equivalent message?   Continuing on TheGreatEscaper’s reasoning, there are 5 tetromino shapes known to science, T being the one not in play here, while polyominologists simply have not yet discovered an E-shaped tetromino or even pentomino.   As subliminal reinforcement, a gigantic upside-down T  tetromino is formed within the 8×8 combined grid of row 3 -T above.

How were numbers and letters matched up?   The 4 tetrominoes in play enumerate the 4 known grid letters, appropriately enough, by counting slopes.

This order is also found, in reverse, among the circled letters in row 3 above. But the puzzle’s poser has mentioned that yet one more reinforcing detail hides in plain sight among the grids:

The letters in the dotted corners of each 4×4 grid are I, L, S, and O in that order. (This means that the grids are ordered by the number of slopes of their corresponding letters.) But the 5×5 grid seems to be "paired" with the second grid: the space between them is shortened!

Assuming that these are number slope puzzles with numbers replaced with letters, it's possible to deduce from puzzles 2 and 4 that 'L' and 'S' are in between 'I' and 'O', in some order.

Now, solving as much of the puzzles as we can, we can deduce what letters must appear in the corner cells with little quarter-of-circle markings. Map the letters in these corner markings to the centre 5x5 grid around that dot. If you introduce a new letter, let's use ' ' for now, and solve the 5x5 as a letter slope sudoku, you get the unique solution:

At this point, I seem to have solved as much of these puzzles as I can. So, what now?

EDIT: (Thanks to a nudge from @humn, some explanation from @Deusovi and some more nudging from the OP) I L O S are all the tetronimos. What's missing? T, of course! So, filling in the blank spaces in our 5x5 with T, we can see the final message 'I LOST' written out in the top column!

I tried to solve each slope puzzle as far as possible under the assumption that each letter could only appear once:

Solving the slope puzzles without knowing which letters were used was really fun!

After moving the letters around the dots into the middle grid it could not be solved.

The other letters around the dot had to be after L and S respectively and the last remaining letter had to be after S. This means L is the first letter which leads to a contradiction when solving the grid.

I also tried to find common words only fitting the 4 smaller grids that could form a useful sentence, but no luck there either.

Bonus: Middle grid solved with the word slope (that is enough to solve it):

Not the answer you're looking for? Browse other questions tagged logical-deduction pattern grid-deduction or ask your own question.

40
Introducing: Number Slope™
27
Cryptic Poem: a study in what?
13
Completing the square?
14
What is the world?
11
The Three Little Pigs are hiding something