Spell out your moves and reach the exit

You are a knight, far from your familiar checkered board. You have 9 moves to escape, but there are some rules. 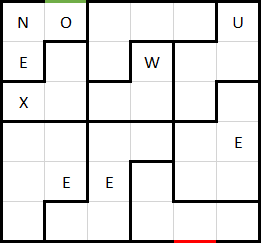 Of the numbers from one to nine:

Since "the space you land on must be the first letter of the word", we can immediately fill in the rest of the TWO and the first N of NINE.

Now the F of FOUR is reachable in two moves from the T of TWO, so it must be either below the U or the lowest cell of the FOUR region. The latter is impossible since the intermediate step must be in one of the five-cell regions. This also tells us where the T of THREE must be, so THREE is the rightmost five-cell region: 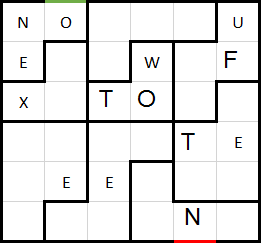 Then we know exactly where the F of FIVE must be, and we can fill in the whole of SIX. Since the third row must contain at least one E, it must be the second E of THREE, which gives us the "one exception" to letter duplication in a single row/column. (Clearly this "one exception" means the entire letter E, rather than the single pair of E's we can already see adjacent in the initial setup.) 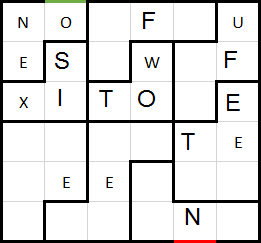 Now that no-duplication rule tells us that the O of FOUR can't be in the third row and the R of THREE can't be in the fifth column, enabling us to finish filling in those regions.

The E of EIGHT (the only E in the region) must be two moves away from the S of SIX. This tells us which way round the SEVEN and EIGHT regions are, and where the S of SEVEN must be.

Also, the no-duplication rule tells us the N of SEVEN can't be in the first column, and then the fourth (SEVEN-specific) rule enables us to complete this region.

The no-duplication rule also tells us where the T of EIGHT and the second N of NINE must be: 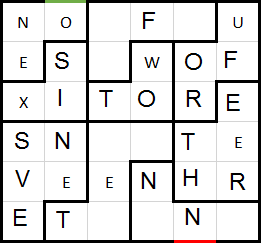 Now we have the I,V,E of FIVE, the I,G,H of EIGHT, and the I,E of NINE to fill in. The fourth and fifth columns must each contain an E, so we can fill in the two last E's. The no-duplication rule tells us where the I of EIGHT must be, and the rest is free. So the final, most general answer is: 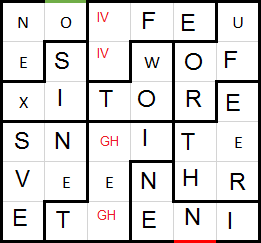 I am assuming the "one exception" means we can ignore the no-duplication rule for one entire LETTER, as no solution is possible otherwise.

The starred cells allow some freedom - V/I can be swapped, as can G/H.
The two Es in SEVEN cannot be moved, nor the Ns in NINE, so it is not possible to prevent a same-row duplication of E in the bottom row; nor can we avoid a same-column duplication of (at least) one E in THREE.

The one exception to the duplicate rule is obviously E. There are far too many Es in these number names to make them not collide.

Not the answer you're looking for? Browse other questions tagged logical-deduction knight-moves grid-deduction or ask your own question.