As you come to consciousness, your first thought is not of the cold stone floor beneath you, nor of the skull-adorned torches hanging on the walls.
ugh... I stayed up too late on PSE last night... My brain's a little fried.
'I see you're finally awake.'
With a start, you leap to your feet and look around for the source of the voice, finally getting a gauge of your surroundings.
Uh oh.
'Welcome to my MAZE OF DOOM! Also known as the Ooh-Aah Cryptic Maze, but we all know which one sounds more intimidating.'
The room is small, with a 6x6 tiling of large stone slabs on the floor. You quickly note that there is no door.
'You had a little sleep, so I took the liberty of putting you in the north-west corner of the room. At least that corner is safe!'
There's a speaker attached to the ceiling, causing your captor's voice to echo throughout the room.
'Anyway. Enough chitchat. I've made you a little test. To escape this dungeon, you have to find a correct path to the magic tile, and say the magic password. What's that? You want to know which tile it is? Too bad. Also, stepping on a wrong tile will lead to immediate DOOM!'
This is totally unfair!
'Here's some cryptics which could guide you to safety. Good luck...'
You notice a piece of paper wrapped around the handle of a torch right next to you, and you carefully peel it off. It reads:

Here are six cryptics to guide you through.
The password might be ne ws to you.
The clues aren't ordered, though, so,
Any ooh-aah, go!

Confused, you look around for an extra clue, and you notice a faint 'A' marked in the tile you woke up on.

(Have a visual representation) 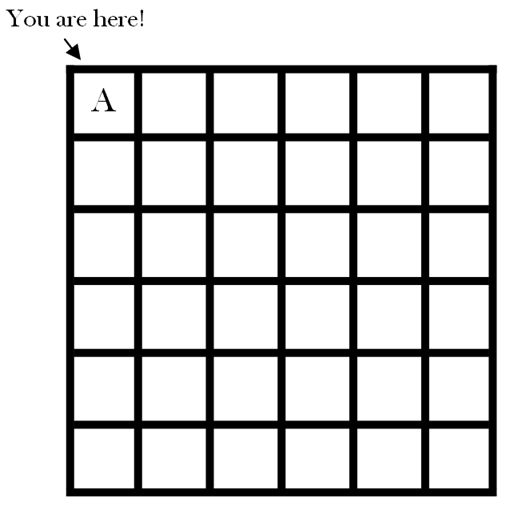 EDIT: I had to flip the dungeon orientation vertically. Sorry for any inconveniences this might have caused.

EDIT: And I flipped it back to the original orientation, because that was actually correct in the first place. Whoops! It's all good now :)

We can arrange these answers in the grid

so that the diagonal starting from the south-west square going north-east (clued by "ne ws") spells the word SPIRAL. (Thanks @MOehm for pointing this out)

starting from the A in the top left, the vowels trace out a single path:

the last four letters are OOAA, and the title verifies that this is the correct solution.

The magic tile is the second A in the top row (second from the right), the correct path is along the vowels, and the password is "spiral".

Not the answer you're looking for? Browse other questions tagged cryptic-clues mazes or ask your own question.