Before we get to the art, we first have to go over museum etiquette. 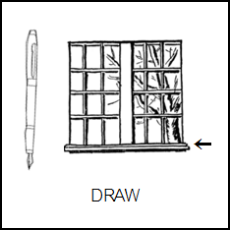 This clue depicts a pen beside a sill, both above the word draw. The pen and sill are a rebus for PENCIL, which, when taken as a verb, is a synonym of draw. The word draw constitutes the definition of the clue, and the PEN + SILL rebus constitutes the subsidiary indicator.

Just like with purely verbal cryptic clues, however, it will not always be clear what constitutes the definition and what constitutes the subsidiary indicator. The definition of a cryptic rebus can appear anywhere (even misleadingly integrated in or around the subsidiary indicator). Part of the fun of these puzzles is the thrill the solver gets upon discovering where exactly to “split” the clue into its components.

Also like purely verbal cryptic clues, there is an exception to the rule that all clues consist of a definition and a subsidiary indicator. So-called double (or triple) rebuses comprise multiple rebuses, all of which, when solved, unequivocally signal the answer.

Lastly, rebuses can utilize any standard cryptic conventions. They can signal containment, reversals, beheadings, anagrams, and homophones. They can also make use of abbreviations.

Answers should indicate the solution, the definition, and the path to the solution. An answer to the above example would look something like:

Now that you’re all caught up, let’s visit the museum. Please do not destroy the art in frustration: 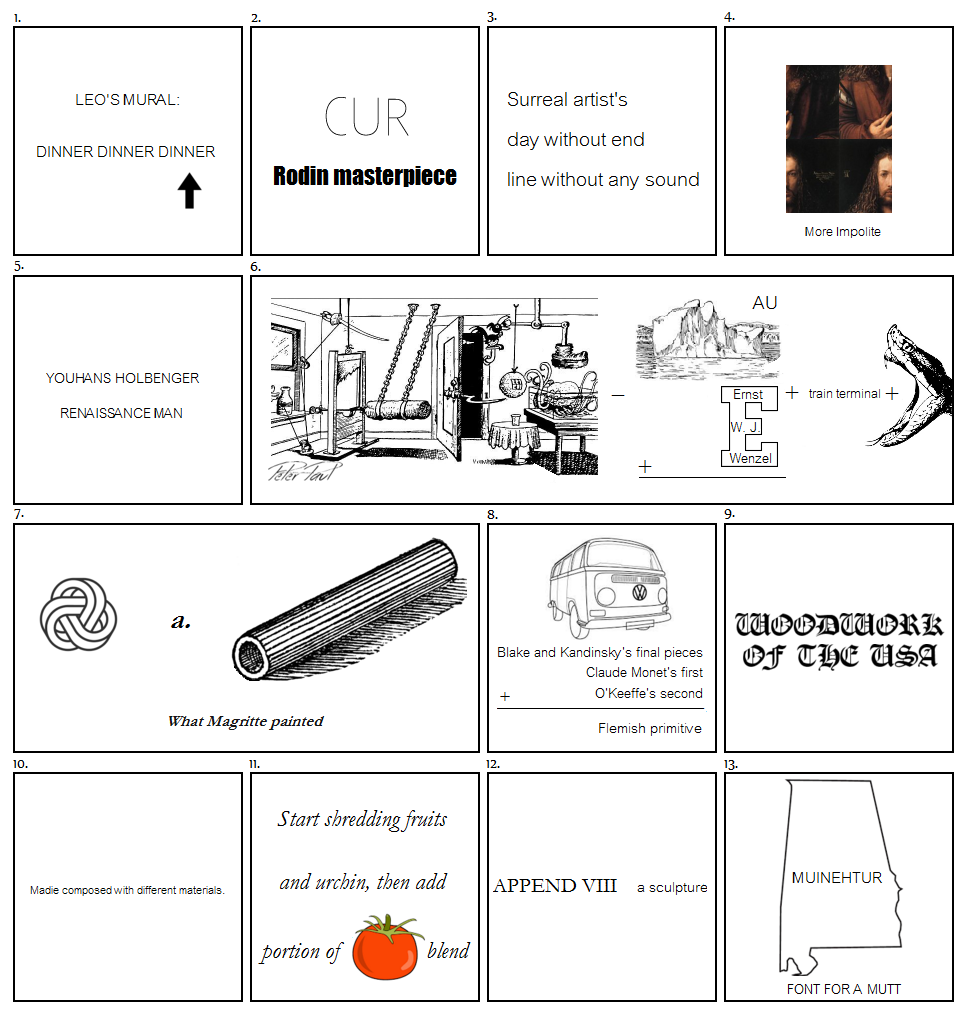 My first crack at 12 (completely wrong)

COLON. A sculpture after append VIII would be the append IX, the appendix is part of the colon and a Colon statue is a type of African wooden sculpture.

THE LAST SUPPER by Leonardo da Vinci (Leo). It's the last dinner in the line.

THINKER - it's a thin cur and a statue by Rodin

NOT A PIPE - Magritte painting and a knot a pipe.

FOUNTAIN - UR backwards in AL (alabama) gives URAL. @DylanChristly worked out fountain is a bit like font and the sculpture was done by Duchamp who signed it R. Mutt.

Sfumato
Start of Shredding Fruits and Urchin (i.e. SFU)
then add portion of tomato (i.e. mato)
Definition = blend (Sfumato = the technique of allowing tones and colors to shade gradually into one another, producing softened outlines or hazy forms.)

HANS HOLBEIN THE YOUNGER HANS HOLBE IN (THE) YOU NGER. - Renaissance Artist

Something about a urinal (RU backwards in AL)

"More impolite" is ruder, which when rearranged is Durer, and the image is Albrecht Durer's self-portrait...rearranged.

Some notes on #6 (not a complete answer)

First we start with a RUBE GOLDBERG MACHINE, but then we subtract GOLD and BERG and MACHINE (Ernst W.J. Enzel MACH in "E")

which leaves us with just:

"Fountain" by Duchamp. "Fountain" is a urinal (thanks @BeastlyGerbil for the start - UR in AL!), which could be considered a "font" (water receptacle), and Duchamp signed the piece "R. Mutt".

Here is the canonical answer, with attributions (feel free to correct the record):

NOT A PIPE ([def] what Magritte painted; KNOT + A + PIPE) @ChrisCudmore

URINAL (UR[RU<] IN AL[abama]; [def] font for a Mutt = Fountain according to Mutt—Duchamp's sculpture Fountain consisted of a urinal signed R. Mutt) @DylanChristy