Determinine the delay on a phone call

How can they determine A and B?

The algebraic solution to this puzzle is not very difficult, although I'd be interested to know if there are alternative approaches.

Unfortunately there is no way for Alice or Bob to determine the individuals times A and B, without outside communication or knowledge. The best they can do is determine the value of A+B.

To illustrate why, let us first consider one approach one might take. One could allow Alice to send her time to Bob, and Bob to immediately send his time to Alice, and back and forth. In the following table I have assumed the clocks are out of synch by 8 units, and A = 2 and B = 5. 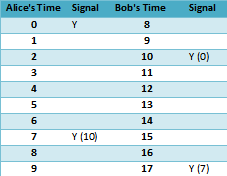 A "Y(x)" in the diagram represents a signal was received, where "x" is the value of the signal received. The initial "Y" at time 0 is when Alice sends her first signal.

Now consider the same scenario but where the clocks are out of synch by 7 units, and A = 3 and B = 4.

The following table shows the signals received and the times they are received. 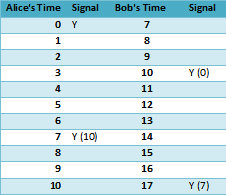 The important thing to notice here is that despite a difference in time synchronization and a difference in the values for A and B, the signals are all sent and received at identical times to previous example, with identical values. That is, if Alice and Bob receive signals in such a pattern, there is no way they can determine if they are in Scenario 1 or Scenario 2 or many other scenarios for that matter.

@Mew already pointed out that you cannot solve this puzzle exactly as stated.

But for all practical purposes, we can assume that A~=B, and since we can determine A+B, we can approximate A and B as A~=B~=(A+B)/2.

Furthermore, it's only shown that you cannot solve the problem in-band. What if they could synchronize their clocks? Then it's trivial: At midnight, Alice announces "it's Midnight", and Bob can announce A. Vice versa for B.

So how could they sync their clocks? Unfortunately, because of the proof already shown, they cannot do this in-band. The best they can do is sync to an error of |A-B|. They need eighter some kind of signalling with known time to travel, or some kind of worldwide synchronous event as reference. They could shoot a laser at the mirrors on the moon, or something. When they decide that Alice's clock is the reference clock (e.g. the one that shows the "correct time" for the system), then Alice fires her laser when their clock shows midnight. When Bob observes Alice's signal, he sets his clock to Midnight+time_the_laser_signal_travelled. Now, their clocks are synchronized and they can trivially determine A and B.