Inspired by this question, I created this puzzle.

I was walking down a street, I see a star club with a security guarding the entrance door.

A man approaches him, and the guard flips a middle and a thumb on him.
The man replied by showing his fore finger.
The guard allowed him to pass.

Another man approaches, the guard flips his middle and fore finger on him.
The second man replied by showing his pinkie.
The guard allowed the second man to pass.

Another man approaches, the guard flips his ring and middle finger on him.
The third man replied by showing his thumb.
The guard allowed the third man to pass.

You decide to approach the guard. He looks at you, he stick his ring and pinkie.

What do you show?

You should show your:

Forefinger. Take the fingers to be the values 0 to 4 mod 5 (any direction and transposition will work, actually, but for simplicity, let the thumb be 0 and pinky be 4) and take their integer average mod 5. 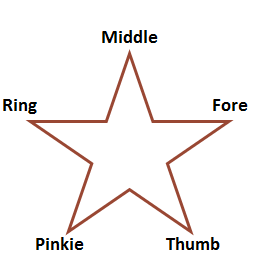 The star club is using star for their password

Not the answer you're looking for? Browse other questions tagged pattern password or ask your own question.