This game originally came about as the solution to the question: "How can I make Hex with more than 6 directions?"

After playing a couple of games of 'Hept' and 'Oct' on their respective tilings of the hyperbolic plane, I realized that it was possible to translate the gameplay of 'Oct' back onto an ordinary, euclidean flat square grid, simply by book-keeping the connections made by the players.

This is done by explicitly marking the connections with lines on the board as they are made. The book-keeping happens automatically in original Hex because the hexagonal tiling doesn't have ambiguity about which spaces are touching. On the octagonal tiling of the hyperbolic plane, there isn't this problem either, but as you can see from the linked picture, playing on an octagonal hyperbolic board would be inconvenient.

A flat grid has 8 possible directions from each space (counting diagonals), like the hyperbolic octagon tiling, but there is the problem that on the flat grid, squares that are diagonally touching are ambiguously connected.

While playing 'Oct' on the hyperbolic grid, I noticed the implicit connection rule:

An octagon is assumed to be connected to any of the other 8 octagons in its vicinity that have already been marked by the same player.

On the Hex and Octagon grids, this 'connection book-keeping' is automatically done for us by the board, but it's simple enough to do this ourselves on a square grid:

Each turn, we simply draw a line (connection) between our current square, and any of our previously marked squares in its 8-square vicinity, unless they would cross our opponent's connection(s).

So in conclusion, I give you the rules for playing "8-way Hex," or 'Oct.' Since it is played with pencil and paper, you can think of it as "Dots and Boxes on Steroids!"

Overview: Each player tries to connect their two edges of the board by drawing dots and connecting them together.

Win condition: A player connects their two edges of the board.

Pie rule (optional, this rule nullifies the 1st player's inherent advantage): After the first move is made, the second player has one of two options:

2) Switching places, in which case the second player becomes the first-moving player, and the "new" second player then makes their "first" move. (I.e., the game proceeds from the opening move already made, but with roles reversed.)

In the following 7x7 newbie game, Red moved at d3, then Blue at b4, then Red at d5. So it's Blue's turn to move. (Edit: The players are using the pie rule.) Is there any way:

1a) Blue can stop red from forming a connection between d3 and d5?

1b) If not, where should have Blue moved instead of b4 on their last turn? Edit: That is, what move should Blue have played to prevent Red from forming such a strong vertical connection early on?

2) Can Blue stop Red from winning the game at this point (i.e., has Red already won)? 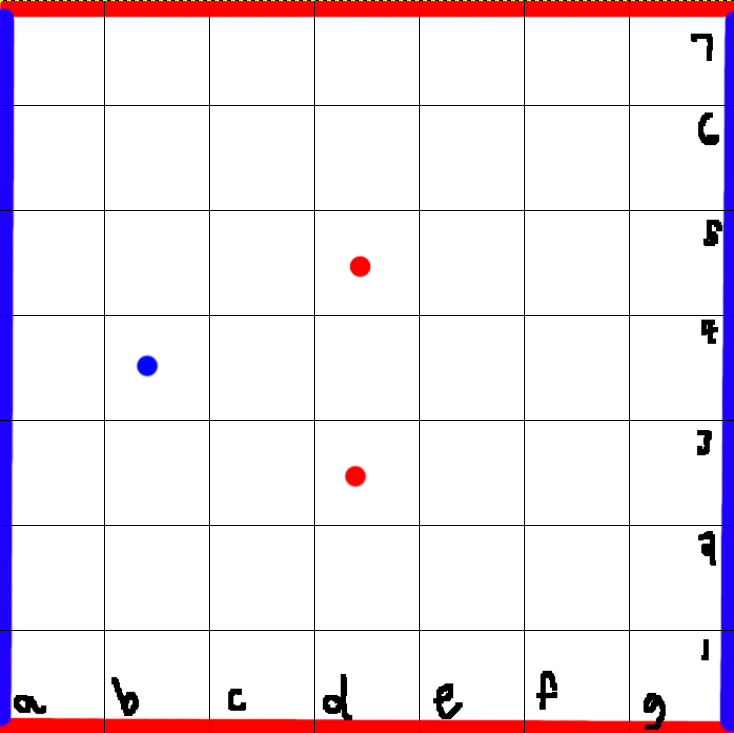 No, Blue cannot stop Red connecting these squares. Whatever Blue does next turn, if Red's next move is at any of c4,d4,e4 then d3 and d5 will be connected; and Blue can prevent at most one of those.

1b (if not, what should Blue have done last turn?):

It's not clear what this means. If it means what should Blue have done to prevent Red connecting d3 and d5 then one trivial answer is that Blue could have played at d5 himself; but why should Blue have had that goal at that point in the game? If Blue can win after Red opens at d3, I bet it is by playing either d4 or d5. I haven't done the analysis to figure out whether Red can win then, though. "Obviously" (mumble strategy-stealing mumble) if Red goes first then she wins with best play, and it feels as if d5 shouldn't be so bad a move as to turn that win into a loss; but I don't really trust my intuition on this.

Red is going to win, as follows. If Blue plays "above" d5, Red does likewise, at whichever of c6,d6,e6 is further from Blue's move. Red now threatens to connect to the top edge and no single Blue move will stop her. If instead Blue plays "below" d3, the same applies with top and bottom reversed. If instead Blue plays "between" d3 and d5, Red connects those two. After Red has played 7 moves, she will have a connection between top and bottom. At this point Blue will have played only 6 moves and therefore cannot have won.

Not the answer you're looking for? Browse other questions tagged pencil-and-paper-games or ask your own question.