As our KenKen voyage of cluelessening­* began, some clues remained entirely hidden from us.  Though much remains to be discovered, we may now be entrusted with all clue amounts at once.  Light as we seek.  Knowing that less is unknown allows us to know all while knowing less.

Imagine an undelineated 3×3 KenKen puzzle.  All that shows are 2 clue amounts.  Imagine the sum of these amounts as small as can be.  Believe that these lead to only one possible completion.  Rest assured that no further clue amounts are hidden.  Now . . . how much and in which cells are those 2 amounts?

Clarity along this step

Be aware that there will be just 2 cages and that one of their amounts will be in the top left cell. 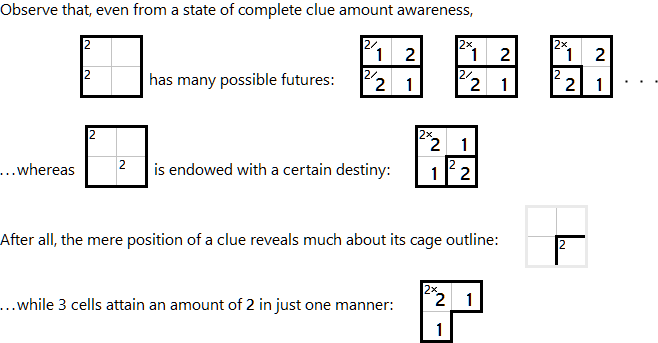 Footnote:
* Cluelessening. Gerund. A retreat from profligate dependence on clues.

apart from moving the clues to different places.

To uniquely identify a solved puzzle we need at least 3 numbers. Therefore we have to be able to solve one area which has at least 3 numbers. An area with 3 or more cells has to use a commutative operation which can only be uniquely solved if it does not contain any possibility to swap values in it. This means the area can at most have 6 cells. Which means the other area can also only use addition or multiplication. If both areas use addition, then the score will be 18. If both are multiplication the score will be at least 30. This leaves us with one area with an addition clue and one area with a multiplication clue.

Moving the clues around gives 7 possible placements, of which 3 are valid solutions (with unique completions). 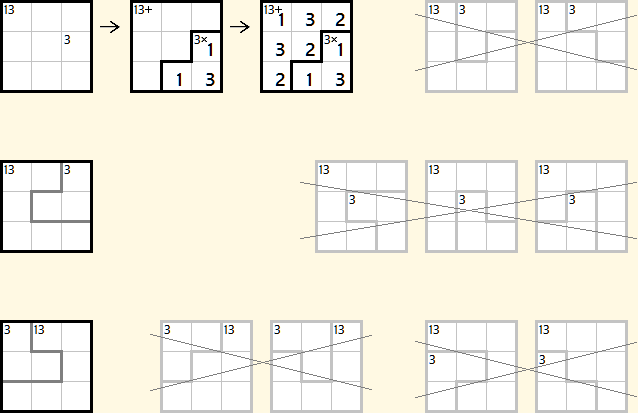 Not the answer you're looking for? Browse other questions tagged no-computers calculation-puzzle or ask your own question.

7
Evaluate the nested square roots
17
How to solve the next field of this Kenken-Puzzle by logic?
10
Find the 4-digit code!
12
KenKen Zen: A journey begins
2
How can i move forward (kenken)
7
Aiming for the 24
4
Digital Font Puzzle. One easy the other may be not
2
Find the “X “in the Box
1
Express the given Fractions as Continued Fractions
31
Sum of the first 86 square roots