Ernie and the unfair division of the dessert

I was pleased to get an invitation to Ernie's place for dinner last Wednesday. The triplets were staying for the week so I knew Ernie would be making an extra effort to cook a gourmet home-cooked feast. So I was surprised when, on arrival, I saw a van from "The Great British Takeaways Company" pulling away from the drive. Still more surprised to find five packets of Fish-n-Chips on the dining-room table. I expressed my concern about the number of calories in the deep-fried food - "I'm on a diet, Ernie". "Ahhh," he replied - "the ideal opportunity to try out my new calorie scanner." Ernie pulled out a small tool that looked something like a miniature blunderbuss and pointed it at one of the packets. "Precisely 625.000 kilo calories," he announced after peering at a small LCD readout. And after convincing me that the scanner could measure any piece of food accurately to the nearest calorie we sat down with the triplets, unwrapped the food, and ate it with our fingers.

The fish was tasty and the chips crisp - all in all a nice meal, but I couldn't help but question why Ernie hadn't produced his usual cordon-bleu repast. "I guess cooking for the girls all week has worn you out?" I suggested. "Oh, to the contrary!" Ernie replied. "Why just this morning I cooked them spicy pork, prawn and coriander dumplings in sweet-and-sour sesame sauce. That was the start of the problem. It was the girls' job to do the washing up afterwards, but they complained that the dishes were extra sticky and dirty. I suggested they should use some of my de-greaser, but unfortunately they miss-heard me and used the de-Gausser instead. It's only designed to work on one screwdriver at a time, so when they loaded it up with all the utensils simultaneously - it blew a coil during the first magnetization cycle. Come and look for yourself."

I followed Ernie into the kitchen and found a great pile of pots, pans, knives, forks, spoons, cleavers, skewers, garlic presses and other cooking paraphernalia all jammed together in the middle of a piece of Ernie-built equipment. I tried to remove a teaspoon only to find it seemingly welded to the saucepan it was sitting next to. "You won't be able to budge it," said Ernie, "the magnetic forces are enormous. We won't be able to untangle anything until I re-wind the burned out coil in the morning. So until then we will have to make do with takeaway food." 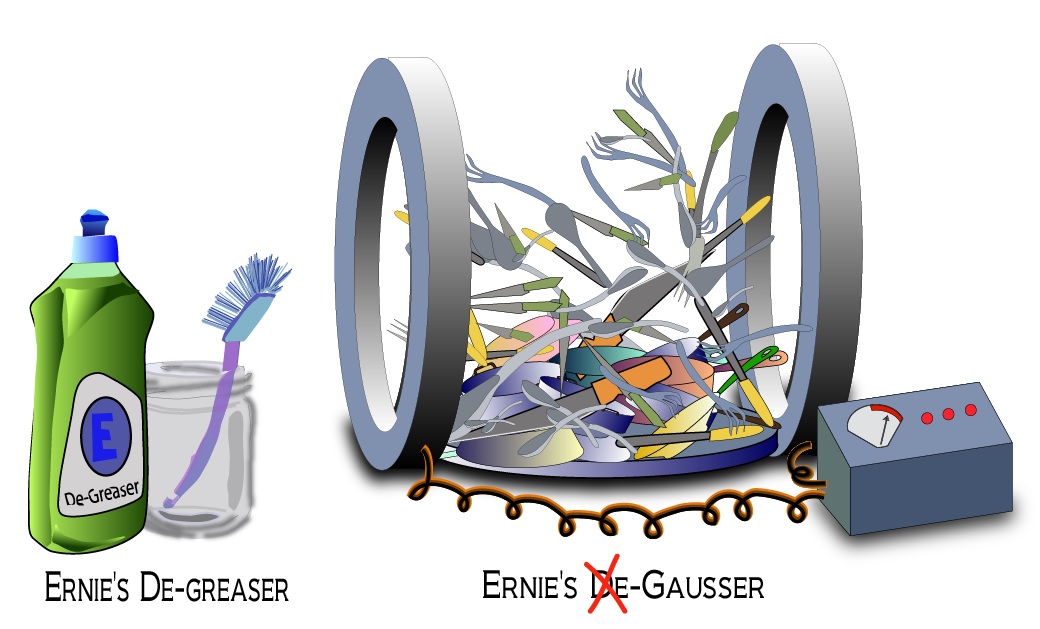 At that moment the doorbell rang and Maude went to answer. She was soon back with a large cardboard box (emblazoned Acme Incorporated Tasty Takeaway Treats) which was opened on the table to reveal an enormous cheesecake. The cake was less than a centimeter thick, but almost half a meter in diameter. "Good grief," I couldn't help crying out, "what about my diet? It must be filled with calories!" Ernie pointed the calorie-scanner at the cake and pressed the trigger. "Exactly 4,000 kilo-calories." I decided that a 1/5th share of 800 kilo-calories wouldn't be too much.

The cake came with a set of six disposable plastic sporks, so we would be able to eat it in a civilized manner, but Loretta pointed out a significant problem - "How are we going to divide it into five equal parts without a knife?" We spent a good five minutes searching the kitchen for a suitable implement - every cutting blade seemed to be stuck fast to the de-Gausser, but eventually Ernie found a large circular cookie-cutter. "This should work - aluminium you see - so it didn't get magnetized." He passed the cutter to the triplets and asked them to cut the cake.

"The cutter is the smallest size it could possibly be (relative to the cheesecake)," said Gwendolyn, "to allow us to cut it into exactly four equal-area pieces with exactly two cuts - but I can't see how to divide it for five people." So Ernie took charge and suggested they should cut and divide the cake as follows:

It took Ernie quite a while to clarify all these instructions so I think the triplets were getting impatient to eat because they didn't make particularly good decisions in the positioning of their cuts.

There were nine pieces (three each for Ernie and me, and one each for the triplets) all of different sizes and shapes. Ernie and Maude appeared to have approximately the right amount (maybe just a bit too much), but Loretta had a much smaller piece than should be her fair share and Gwendolyn's piece was still smaller again. My share was by far the largest - grotesquely too much for me to eat.

I complained that this would totally ruin my diet, so Ernie took charge again. He measured all the pieces with his calorie-scanner and discovered an interesting coincidence.

"Curious," he said, and then suggested that if...

Maude pointed out that there was still a problem as it wouldn't be easy to cut my big piece evenly without a knife - at which point Ernie discovered that he had had his pocket-knife in his pocket the whole time! So the cake was soon redistributed fairly (it tasted great) and everyone was happy. Now I just have one small problem. As part of my diet I have to record my calorie intake to the nearest calorie. I can't remember the size of any specific piece, or the coincidental ratio.
Can anyone help me work out just how much cheesecake I got?

Note: In case of confusion, Ernie pointed out that all the cuts were nice and square edged and that the caloric value of each piece of cake was exactly in proportion to its surface area

I wasn't able to find a solution yet, but here is how far I got: 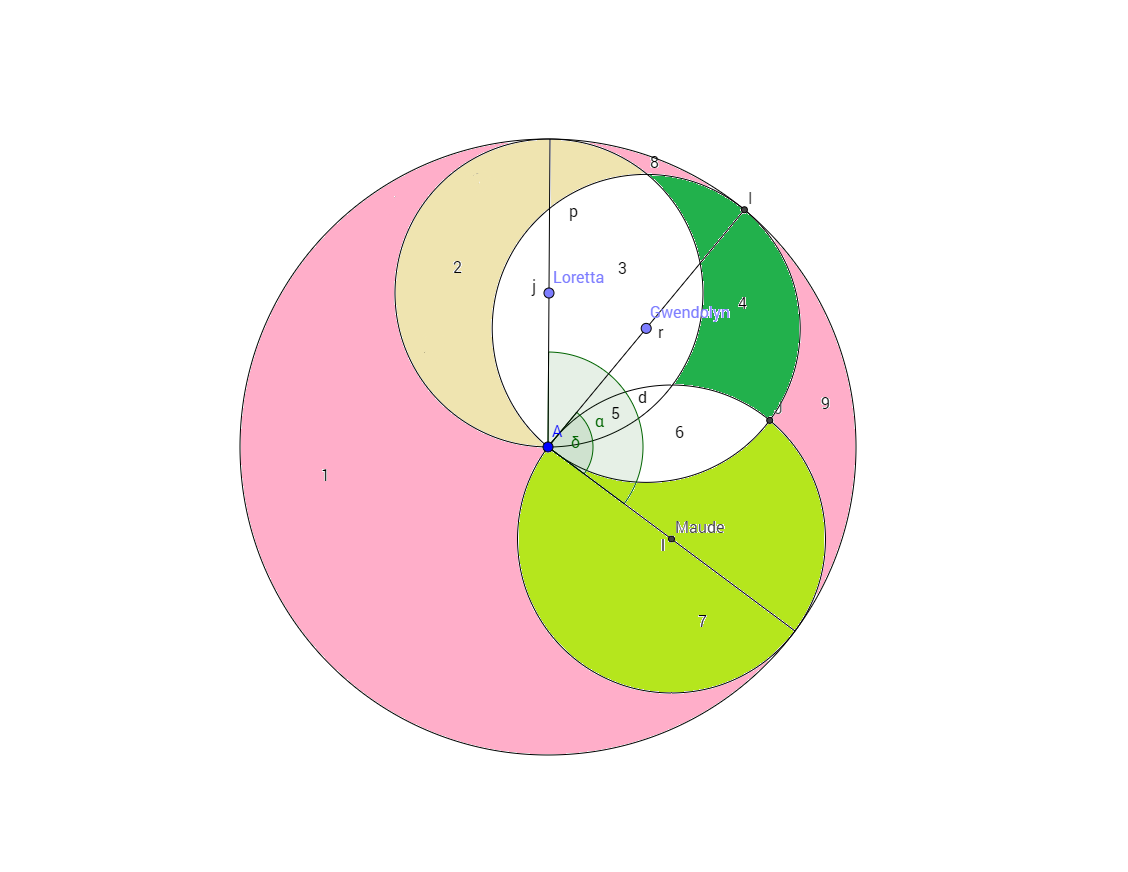 The third option would be to make the cut at an angle of 1.69363, so Penguino's share would be 800 kilo-calories straight, leading to Maude gettin 855 and Ernie getting 745. At none of these points are the mentioned ratios close to equal. The high precision of 90 cal (0.09 kilo-calories, mind you) doesn't allow for much wiggle room here.

There is a spot with the two angles being near 2.15 and 1.67 rad where the ratios are almost the same and everyone gets the same amount of calories +/- 90 kilo-calories. So that must be what Penguino was looking for. To get the exact result, I would have to solve the rather ugly equation system

but unfortunately I don't have Mathematica to do that for me.

Well, I've found out HOW to find out the answer, but got bogged down in the math...

The only reasonable way to cut up the cheesecake at first would be: 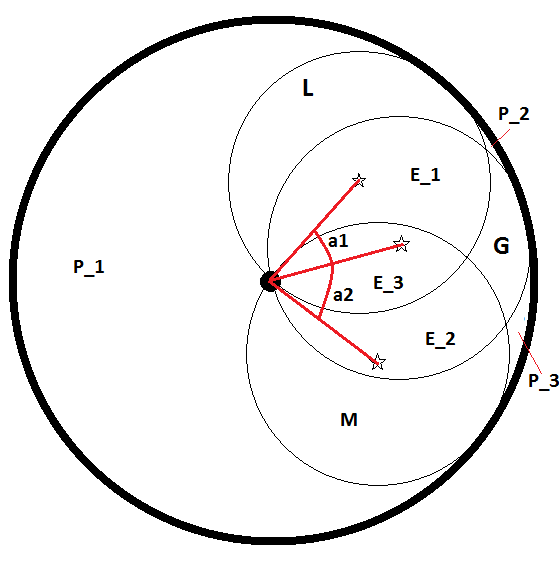 Forgive my shoddy MS paint skills! Here I've used symbols to represent who got each piece before the redistribution:

However, if we're willing to do some trig, we can show that the sizes of Ernie's 3 pieces are not independent, but depend only on a1 and a2. 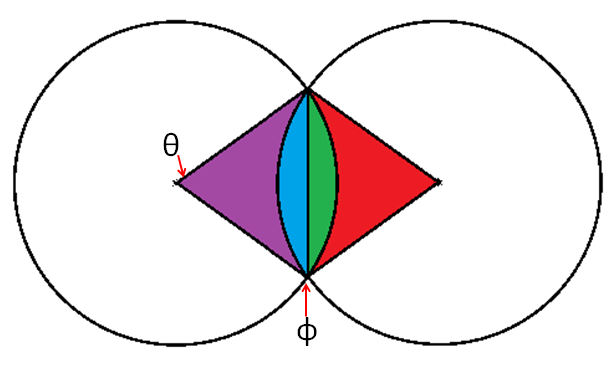 Now we have 2 equations and 2 unknowns and it's time for mathematica to solve it for us! But, I don't have mathematica and I can't seem to simplify this by hand, so I'll leave it here. At the end we can throw out any solutions that end up with people getting too few or too many calories.

Not the answer you're looking for? Browse other questions tagged mathematics calculation-puzzle geometry word-problem or ask your own question.

7
Ernie and the Chocolate Bomb