Let us shy away from the materialistic opulence of 361- cell KenKen layouts (−9 to +9, squared).  Let us contemplate a modest KenKen journey, unburdened by gratuitously extravagant cluenography.*  SerenSerenity may be reached with just a clue or two on a minor board.  Breathe.

Imagine an undelineated 3×3 KenKen puzzle.  All that shows are 2 clue amounts, while others may be hidden.  Imagine the sum of these 2 amounts as small as can be.  Believe that these lead to only one possible completion.  Now . . . how much and in which cells are those 2 amounts?

A path toward clarity

The journey of a thousand undelineated KenKens begins with a single cell.

And without a clue. 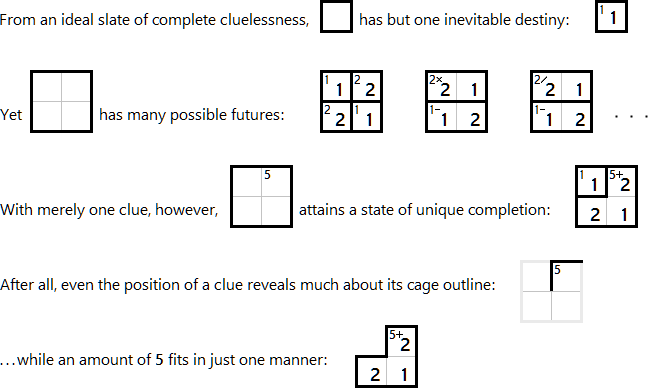 UPDATE: A sum 13 solution, as devised by @Neil W! Thanks!

Old post, with sum a sum 14 solution in a similar family to Neil's is as follows.

Finally, a puzzle which I think is correct! Maybe you can verify for me, humn?

The leftmost 7's cage must extend downwards by at least one square.
Thus, the rightmost 7's cage must extend down the whole last column.
The rightmost 7's cage must then extend left at least one space across the bottom row.
That cage is complete - 7 is prime, must be a sum, and if it extends any further then the sum is impossible to reach.
Since we know the right hand column is 1, 2, 3, we know that the middle square on the bottom row must be 1 to complete the sum. Now the two known squares of the other 7 cage are [2,3] in some order. To complete the 7 sum, there must be either an extra [1,1] or a [2]. The [1,1] cannot be in the cage, because then two 1s will be in the left hand column. Thus, there is just an extra 2, which must be in the leftmost square of the middle column, completing this cage. Now this cage can be filled out completely since there are two 2s in it. The rest of the board is trivially filled.

The 7 7 can also be reduced even further to 5 8 as pointed out by Neil W, and a similar reasoning will yield a unique solution, depicted by humn (thanks very much!) here.

I'm not sure if I got it correctly, is this a valid solution?

Turns out the numbers are fixed, but you have playroom with the walls...

Not the answer you're looking for? Browse other questions tagged no-computers open-ended calculation-puzzle or ask your own question.

17
How to solve the next field of this Kenken-Puzzle by logic?
3
KenKen Zen: The Cluelessening
2
How can i move forward (kenken)