In my enemy is my friend

In my enemy is my friend
In my friend is my enemy
I exist because he does
But he exists from where I don't
Round and round we go again
Each placed in the other's domain
But most places we are seen
We are seen as part of the same dream
Where 1 is 2 and in that 2 are 2 more
My purpose is to show
You can't have one without the other, forever more! 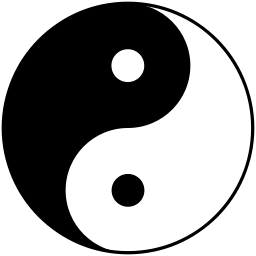 Seemingly contrary forces can be interlinked, such as good and bad or light and dark.

The concept of bad can only exist if good does, and vice-versa, and where there is not bad, there can be good. (Same applies to other apparently opposite forces.)

As on the traditional symbol, the swirls follow each other.

Sometimes there's a fine line between the two, or none at all.

The one symbol has two swirly shapes in, each containing one small circle.

My purpose is to show
You can't have one without the other, forever more!

The symbol represents the concept of duality, which could be called timeless.

In fire and water is oxygen.

They both exist because of oxygen and water exists in the sea where fire can't.

They are both part of the 4 elements - water, air, fire and earth.

Not sure, but fire is to show light. @yitzih suggested H20?

You can't have one without the other, forever more!

You can't have water and fire without oxygen.

As an addition to @Beastly Gerbil's answer:

In Water(H2O) there are 2 elements (Hydrogen and Oxygen) and the are 2 of the Hydrogen atom.

Not the answer you're looking for? Browse other questions tagged riddle rhyme or ask your own question.

28
My Famous Family and Me
21
I'm but a speck of fairy dust
10
What is my name, and where is my domain?
6
Who is my best friend?
7
A confusing year to study
5
Young man Randolph
5
A Journey through Known Territory
10
What does my friend need?
3
Perhaps I should go into pest control
6
The Staircase of Paint