Ramblings of a drunk man

Rudolf slams his cup loudly on the table and shouts "The King will die". The red nose he shares with the similarly named reindeer shows he clearly had too much beer. His exclamation turns heads all around the inn though. Before you can silence him, he continues: "He thought he would be safe when he moved into his castle a while back, but the church is pressuring him for a while now. Now the royal guard of the enemy moved into our territory.".

By now the crowd starts murmuring. "So the Queen saw all that happening from the battlements, but guess what - she felt like she was in danger. So instead of confronting the royal guard head-on, or scheme simultaneously against the church and the royal guard, she takes the King's seat and pretends to do something about the church. She let the bandits storm the castle unchallenged, and fed the King to the wolves. If she wouldn't have fled, they would not be able to touch the King."

"Treason!" someone shouts nearby, and half a dozen guards home in on your table. "Arrest them and hang them before sundown!"

It looks like your friend has brought you into a lot of trouble. Quick, explain the situation before they hang you.

Note: If you figured out initially what the puzzle is about, these are the requirements.

You are required to show the guard the final situation, e.g. by constructing the board on this site or by creating some pretty ascii art. The puzzle includes clues about the situation before this final situation. Please make sure that these clues match with the board.

And one further note:

Your board only has to contain the 6 mentioned pieces.

Use two pieces to construct "So the Queen saw all that happening from the battlements". Work from there.

First off, Rudolf is talking about

The initial board and the demise of the king.
The King castled early on but the black bishop is threatning his area (not checking) and the Black Knight moved into the White's half of the board. 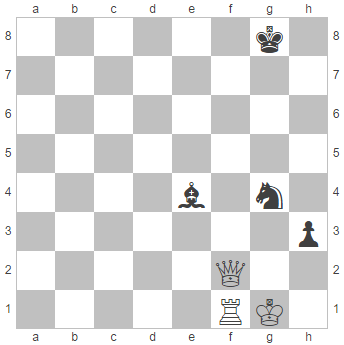 The final board after white and black each move once.
The queen "Saw all that happening" by being "on top" of the Rook. She was being threatened by the Knight so she moved to the King's starting position instead of attacking and threatened the bishop. This allowed the black pawn to move forward and checkmate the king. If the queen hadn't moved she could've killed the pawn. 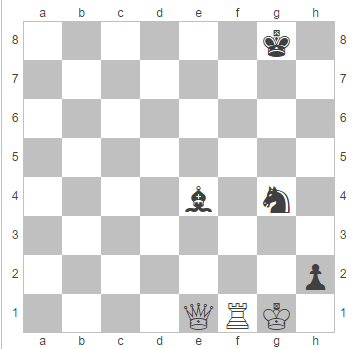 A chess game is what it sounds like. The king is getting mated by the opponent and the Queen is sitting silently at e1 while all hell is breaking loose on the other side. The bandits are possibly the pawns. The queen is too far away from the castled king to protect him. And the player is in a terrible position. "pretends to do something about the church" might refer to the queen attacking the opponent's bishop but there is no defense. The Queen is too late and the opponent, with his whole army has laid siege on the King.

Refer to what has happened so far. The king has castled, but the bishops are eyeing it threateningly. Now, The Knights are jumping into the attack. The queen is attacked. Instead of going for a double attack on the knight(Guards) and the Bishops(Church), the queen passively moved onto e1 where she could only watch the king perish as the minor pieces(The pawns,bishops and knights) finished the king.

As for the board:

I have provided a picture of it below. The queen was probably on g3 where she was attacked by the bishop(Church). Then, she should have moved to f2 where she would have attacked the knight and the light-squared bishop. But, she moved to e1.(King's original square) and attacked the dark-squared bishop but only watched, to her horror, the murder(Checkmate) of the king by the pawns(Bandits), Knights(Royal guards) and the bishop.

Pic of the board 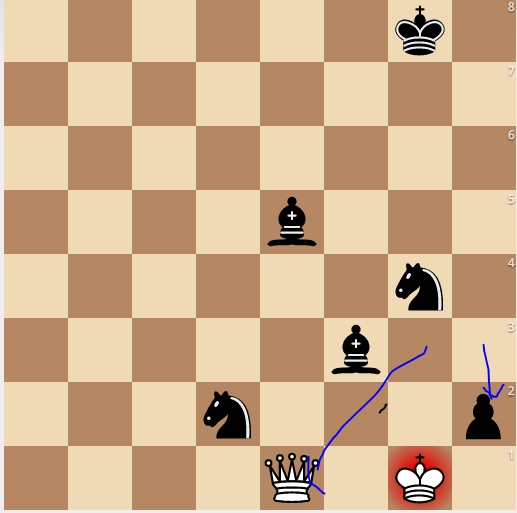 A game of chess

You friend mentions 'King', 'castle' and 'queen' which are chess pieces as well as 'church' which could be a bishop, 'royal guard' which is a knight, and 'bandits' which are pawns.

- 'The King will die' suggests a checkmate.
- 'Moving into his castle' suggests castling.
- 'The church is pressuring him' suggests he is trapped there by the bishops.
- 'The royal guard of the enemy has moved into our territory' suggests that knights are closing in.
- 'the Queen saw all that happening from the battlements, but guess what - she felt like she was in danger' suggests that the queen was in a position were she could be taken.
- 'instead of confronting the royal guard head-on, or scheme simultaneously against the church and the royal guard' suggests that the queen didn't try and halt or take any knights or bishops.
- 'she takes the King's seat and pretends to do something about the church' suggests the queen moves to the kings starting position while in a position to potentially take a bishop.

'she let the bandits storm the castle unchallenged, and fed the King to the wolves. If she wouldn't have fled, they would not be able to touch the King'


The queen didn't stop the pawns taking the castle and checkmating the king. If she hadn't moved they wouldn't have been able to do so.

23
Identify the twins and cousins!
54
Can you explain these equations?
5
Help, my life is in danger!
9
Making broken love smile again!
17
National Language
8
A princely romance
19
I can't remember what I was doing last night
27
The Dance of Love?
37
Alice and Bob invent a game