A party is being held at a local mansion. The host is very rich and his success is because of one thing ~ his famous recipe for spaghetti!

The spaghetti recipe is kept in a secret room inside the mansion, which is only accessible from the kitchen, which can be only reached from the party lounge, which is separated from the security lobby by a floor where elephants have been reported to occasionally trample fishy guests.

The mansion has two entrances to the security lobby, and all adjacent rooms are connected by two doors.

Your task is to enter the mansion, sneak into the secret room, steal the spaghetti recipe and get out again. Here is a plan of the mansion. 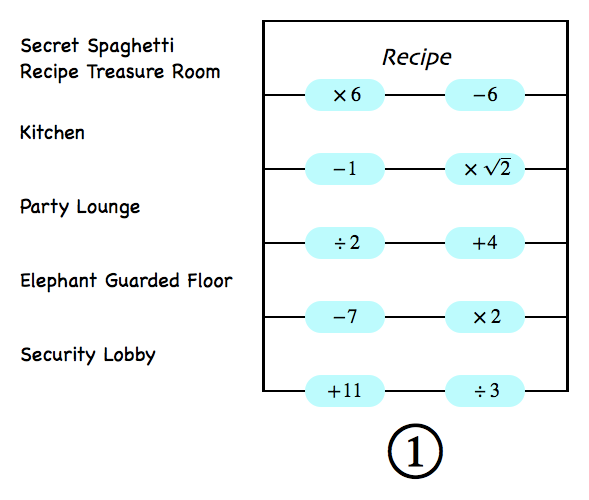 In this puzzle, you start as the number 1 outside the mansion and each time you pass a door, an operation indicated on the door will change your number. After leaving the mansion with the recipe, you must be again number 1 as when you came in.

You can pass all doors multiple times in both directions, but the less, the better, otherwise the security may become suspicious and you don't want them to release the elephants :) The shortest solution wins.

12 doors. Total number of steps must be even. And problem can not be solved in 10 doors or fewer.

Not the answer you're looking for? Browse other questions tagged mathematics mazes or ask your own question.