While preparing the next puzzle for publishing, I decided to encrypt the file to protect it, but something went wrong or maybe I entered the wrong command because the puzzle was encrypted, yes, but not the way I was expecting it to be! Instead of becoming an unaccessible file, it became another puzzle entirely!

However this gave me an idea, would you be able to solve it and understand what puzzle it used to be? What do the cubes mean? 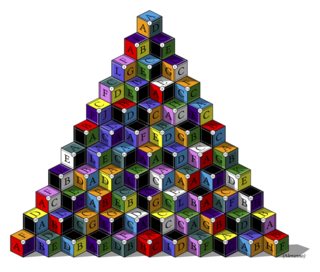 I am able to solve it! The puzzle when decrypted is a:

Crossword Puzzle - Similar to this one

Encoded in order top face, left face, right face. They are then ordered in row major order then left to right. The same order as the numbers in the image.

Each letter refers to the index of the letter in the colour of the cube. So for Red A=r,B=e,C=d. Blacks indicate empty spaces.

by noticing that all of the letters were small except for very few. The large letters were all assigned to the colours with longer names. Decoding the first few cubes from the top let me know I was on the right path.

The puzzle needed to be arranged into a grid. 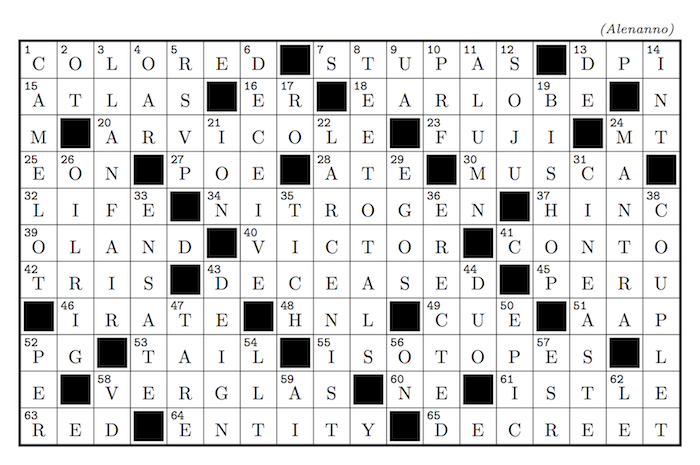 Not the answer you're looking for? Browse other questions tagged pattern enigmatic-puzzle no-computers or ask your own question.

19
Breaking a systematic password
9
Aptitude Assessment
11
The Realm of Cubic Repetition
12
What did they kill Bob to hide?
14
Patterns in colored 3x3 squares
18
On The Subject of Colored Switches
6
The Alchemist leaves a trail
12
Lunch with my travel agent
5
A color mixing puzzle