(This is the community metapuzzle, discussed in this meta thread. It requires answers from nine other puzzles linked below.)

You find a mysterious device sitting on the ground. It's labelled in a language you don't recognize and doesn't seem to be like anything you've ever seen before. Picking it up, you notice no form of input or output except the button that was face down... which you now seem to have released by lifting it off the ground. The device starts to make a whirring noise. As it vibrates, you suddenly find yourself transported to all sorts of locations, time periods, and situations with seemingly nothing in common...

As the whirring slows down, you hear a lot of yelling... and notice several spears pointed directly at you.

Welp, this is bad.

You're gonna have to find a way to calm these people down, and fast. You desperately try to think of things to show them to convince them that you're worth keeping around, at least out of curiosity. Mathematics? No, they don't have algebraic notation, so you'd have to somehow convey a concept without words. Maybe there's something on your phone? But there aren't any internet connections in ancient Rome (or at least, you think that's where you are). While fumbling around in a desperate panic, you notice that the back of the device has come loose, and inside there appears to be some sort of diagram. Maybe this was placed in there intentionally? Could this give you the clue you need? 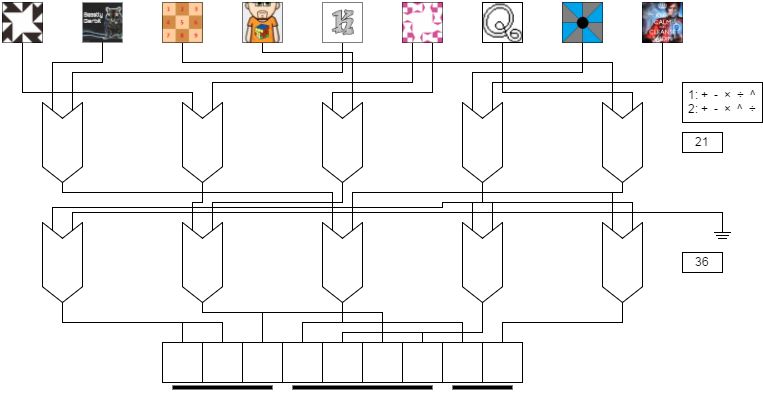 The only vowels are I and O, and an I starts every such string, treat these as binary.

Plugging these into the using this decoding blatantly stolen from ffao

And the next step:

And now, to get letters

We're in Rome (maybe), and these look like Roman Numerals so...
VIVID MIDI MIX

So I pull out my phone

Open the music app, and play this sick video game music jam that was apparently downloaded onto it by whoever drew this diagram. The centurions are impressed by this wondrous sound, and don't even stab me a little bit.

Not the answer you're looking for? Browse other questions tagged wordplay metapuzzles or ask your own question.

32
“The Unfinished ________ Waltz”
28
A Puzzle Like Deja Vu All Over Again
18
A Cleverly Disguised Word
22
The Temple of Puzzling
11
The answer is less complex than the riddle
10
A very short story, with letter swaps
14
The Etiquette Room
15
Search the Pantomime 4 Clues
7
A Puzzle With Weird Genii Making Deli Meat

10
A Right Mess Made
61
Letter Police to the Rescue
14
What is the world?
12
Missing, 'till the very end
12
Take note, this is my favorite thing
36
This puzzle's main portion is a piece of… cake?
5
The Weeping Willow's Cousin
44
Recognizing a Metapuzzle
15
Bongard Metapuzzle
12
Chrysanthemum bejeweled with dew drops