This puzzle can be solved as puzzle on its own, but its solution is also part of Deusovi's Community Metapuzzle. 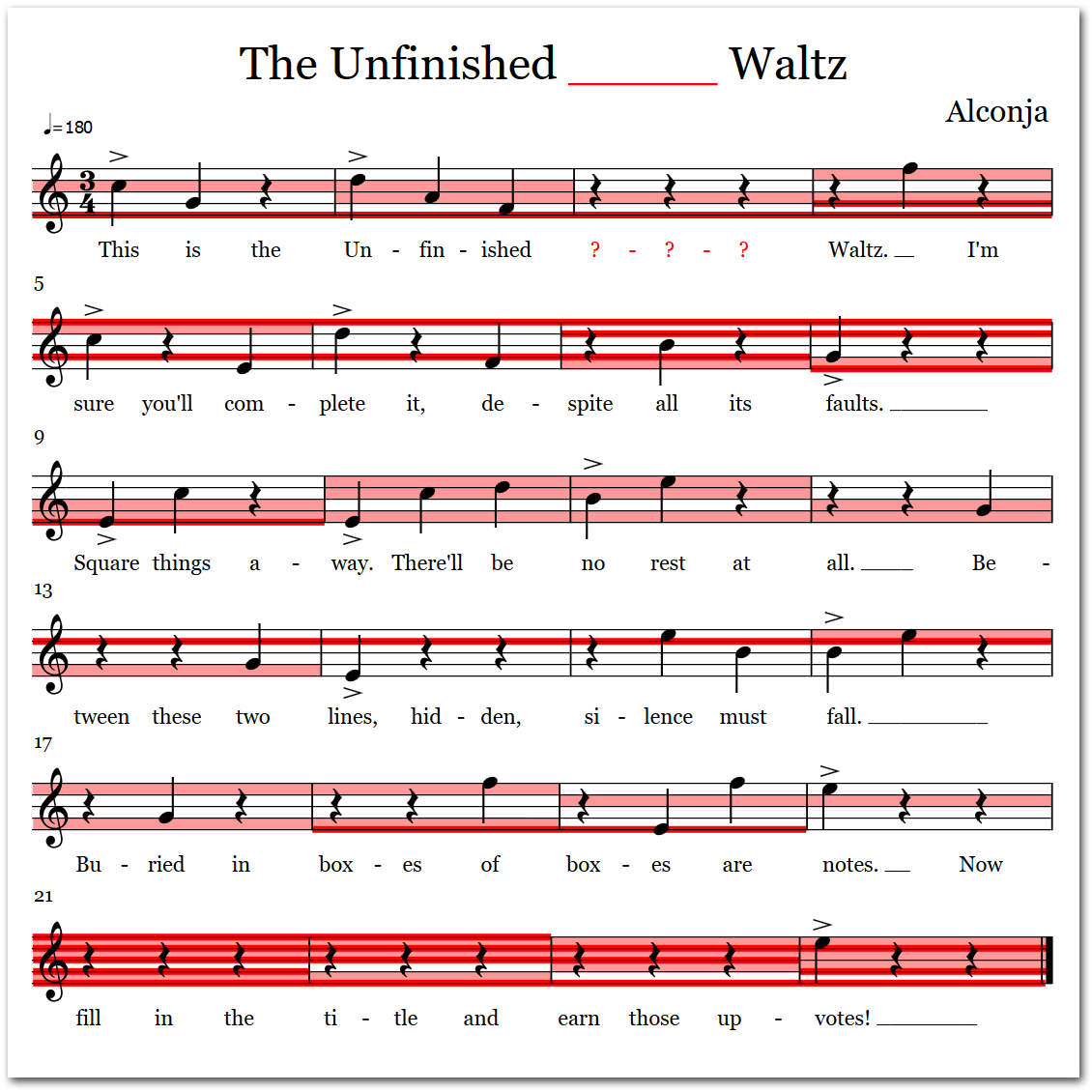 Above is the sheet music for the universally acclaimed "The Unfinished ________ Waltz", by renowned composer, Alconja (1763 – 1844). A deeply moving piece, to be sure, though sadly it remains incomplete...

...However, it has long been speculated, given Alconja's strange, non-standard notation, that there may be more information hidden within the composition than is superficially apparent. Of course, to be fair, some scholars downplay this, arguing that the red is simply emotive emphasis on Alconja's part, pointing to the bleak juxtaposition of haunting silence and the aggressiveness of the blood-red lines enraging the final passages in particular. That being said, the lyrics do seem to back up the former theory (even as they pull at the heart strings).

Perhaps an astute connoisseur of fine music, such as yourself, may actually be able to piece together the clues and lay the centuries of conjecture to rest. So, the question is: Can you finish the unfinished? Or more specifically, what is the missing word from the title of the song?

Note 1: All descriptive text is just flavour. The sheet music and lyrics are all you need.

Note 2: Very little, if any, actual musical knowledge is required for this puzzle. In fact, you can mostly think of the sheet music above in purely visual terms, with a fair bit of the notation being superfluous. However, here's the absolute basics of music theory, which may help in understanding things a little better:

If we continue from MMAdams' discovery (if you like anything in this answer, go upvote MMAdams'!) and

highlight cells in the Sudoku grid corresponding to notes falling on shaded lines/spaces in the music,

we get the following pattern:

in the first bar the shaded notes on the staff are C and e; the notes are C G e; so the first and third of those cells get marked. Another equivalent way to say this: for each note, transfer the shading (if any) on that note's line/space to the corresponding space in the Sudoku grid.

This, if you squint at it a bit, says

which also (note: the following contains a slightly spoilery conjecture about the metapuzzle)

has the necessary three syllables, not to mention lots of Roman numerals like the other things found so far that feed into the the metapuzzle.

Edit: I figured out the title I think!!!!

Refers to the 9 boxes of 9 characters in a sudoku grid. There are 72 notes, 9 less than a Sudoku grid, plus, given the five lines of the staff and the four spaces between, we have nine notes total, e f A B C D E F G. (I used lowercase letters for the lower notes, for simplicity).

If you take all the notes given:

And put an empty line in the middle 'Between these two lines, hidden, silence must fall' means you put empty spaces there like you do anywhere else there is a rest. Then you get a sudoku grid that looks like this: (Edit: I fixed it! I had a G in the wrong place, oops, now it is solvable!)

Which solves to this:

I know my answer still isn't making use of the red markings, so I'm not sure this is right, but it was fun to do!
EDIT: Gareth McCaughan figured out the title was

by combining the marked notes with the sudoku grid (Thanks Gareth! And anyone else, go upvote his answer), so this question is long since solved, but I figured I'd make a musical version of the whole answer anyway, so here is what it looks like: 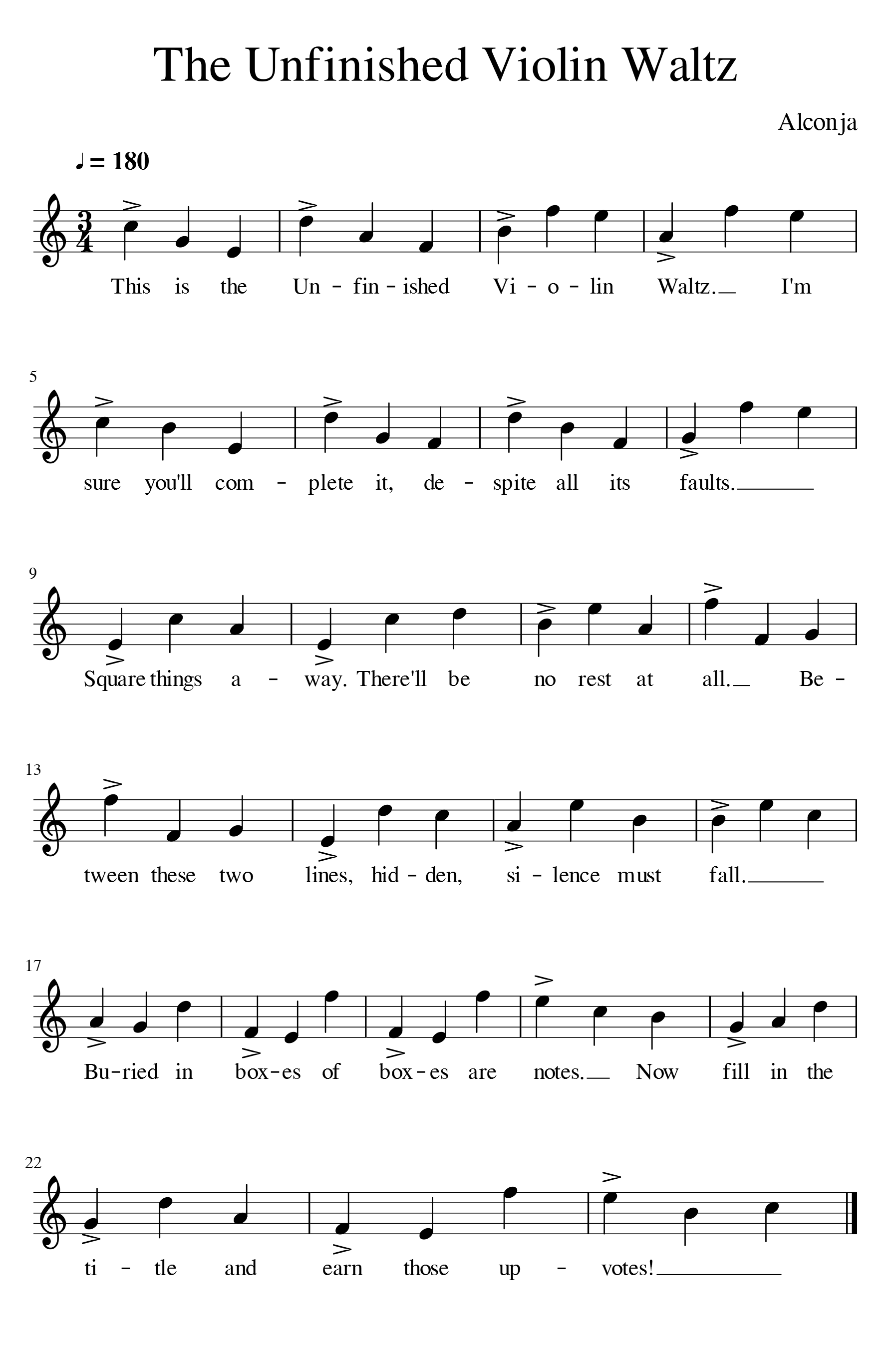 and here is what it sounds like (You will have to imagine the lyrics on your own since I do not think my roommate would appreciate me singing riddles in the middle of the night.)

Alconja, this was a super fun puzzle!

(Disclaimer: I know the final answer, and that's it. Alconja stated that that would not confer any advantage.)

There are exactly 32 notes in the piece. The lyrics say "square things away, there'll be no rest at all". 32 is not a square number, but it is suspiciously close to one. This may clue that we have to arrange the notes in a square.

Denoting high C, D, E, and F with capital letters and the rest lowercase, here's what one potential pattern looks like:

This seems to satisfy "boxes of boxes", but "these two lines" doesn't seem to be satisfied here.

is another option. This makes two squares, and if four notes are added there, then we have 36 notes. Alternatively, ???? and DbEg can switch places: this places the missing notes at "there'll be no rest at all, between these two lines, hidden, silence must fall". This fits better with the lyrics at that point, but not "square away".
Share
Improve this answer
answered Nov 22, 2016 at 6:38

Not the answer you're looking for? Browse other questions tagged word enigmatic-puzzle visual music or ask your own question.

8
Can anyone help me remember the title to this song?
6
Proof without chords
4
Deciphering a piece of music
14
The state of the art in music puzzles
19
Hoping for a satisfying conclusion (a musical connect wall)
16
I'm Back........!
21
What is missing from my aunt's inheritance?
16
Kicking and screaming (a musical connect wall)
1
The wellerman's lost treasure puzzle
1
Please help me identify this encryption puzzle with hidden images