A friend came to me with the following FootChess position, claiming that White had a way of forcing a win. I'll admit that I regarded the board with skepticism, but as time passed it began to seem plausible. How might it have been done? 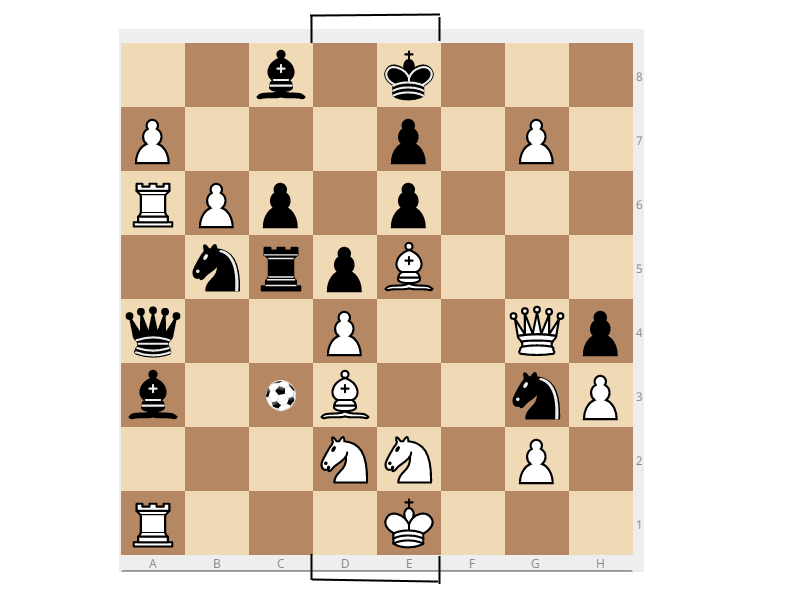 As a reminder, the rules of FootChess are here:

And here is a link to the first Footchess puzzle.

To prevent immediate loss, white must capture the ball with her knight. Passing anywhere other than a2 or b1 results in an immediate score for black. White should do:

Any of those is followed by pawn captures ball, converts to knight, scores.

Black cannot stop white from moving the ball to f3 on move 2. But

would mean that black can take control of the ball on turn 2, which white does not want. White responds with:

White still threatens to send the ball to f3, then to g8.

Black can prevent that with:

White responds with one of

Black isn't threatening anything, and can't reach the ball, so white is free to just mop up black's pieces. The rook and forward bishop are vulnerable White also has pawns ready to promote to queens. If black makes a move to threaten b1, white can easily pass the ball to f3 or any of several other places it would take at least two turns for black to attack.

That threatens white's control over b8, allowing black to threaten g8 on the next move. White follows with:

At this point, black is so far behind in material, it's hopeless.

We'll almost surely need to use the Pawn at g7 to score, it can score when it promotes to a Knight, and is open to a pass from Bishop and Queen. It will be harder to force a7 pawn to score due to knight at b5.

Nc3 Ob1. This seems the safest location and leaves options open. Without interference it lets white Rb1 0e1-f2, followed by Kf2 Og2-h3-g4-g7-g8. With the pawn then scoring by taking g8. The other potential pass path would seem to be Bb1 Og6, and then Qg6 Og7-g8, and score with Pg8(N) Oe9. This is of course incomplete, and I still need to explore black's responses as the king can simply take the pawn in two moves, although that would just allow white's queen to score.