Once there where two men playing checkers. at one time during the game. one of them stopped and said "Look at that, we just arranged twelve checkers in six straight lines of four". Then they finished their checkers game without any more interruptions.

Now assuming that the man was telling the truth, and they were playing the game correctly. how is this possible?

P.S. this problem is also possible with thirty checkers and six lines of seven. (in the exact same scenario). And don't worry this will fit on the board.

The reason they could do this is because

they were playing the game called Chinese Checkers, which is played on this board: 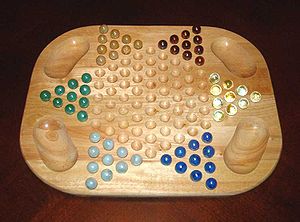 They simply made a "Star of David" shape (six marbles in a hexagon, then six more marbles each touching exactly two of the inner marbles).

Not the answer you're looking for? Browse other questions tagged mathematics board-games or ask your own question.

6
Checkers Against The King
4
Queue in the bank
21
Checkerboard Infection: The Aftermath
7
Born to lie, to live, to die
12
Othello - Most number of legal moves in a given turn
27
The Swedish king and the chessboard
18
Blind Person Ball Game
3
The Marble Game
8
Making 7 congruent triangles from the pieces of a triangle dissection