The mysterious theft in the Nigerian ship

The Nigerian captain Abomeli Iweala was carrying his ship across the Atlantic Ocean, taking with him five foreigners who worked for him. One day the alarm bell rang, and when the captain arrived he missed a precious gold watch that had been inherited for many generations. Immediately suspicious of the foreigners, he asked his first officer to interrogate them. Each foreigner had a distinct nationality, slept in one of the basement's individual cabins, wore a different outfit, had a preference for a unique drink, and at the moment the alarm rang, was working at a different role.

Your officer has provided you with the following information:

Of possession of these informations, the captain realized that one of the men lied, and therefore had stolen his watch. What is his nationality?

the Nigerian flag is symmetrical, so the man who claimed to be turning it the "right way up" was lying.

By filling in the following logic grid using the information provided by the officer (with this online tool) ... 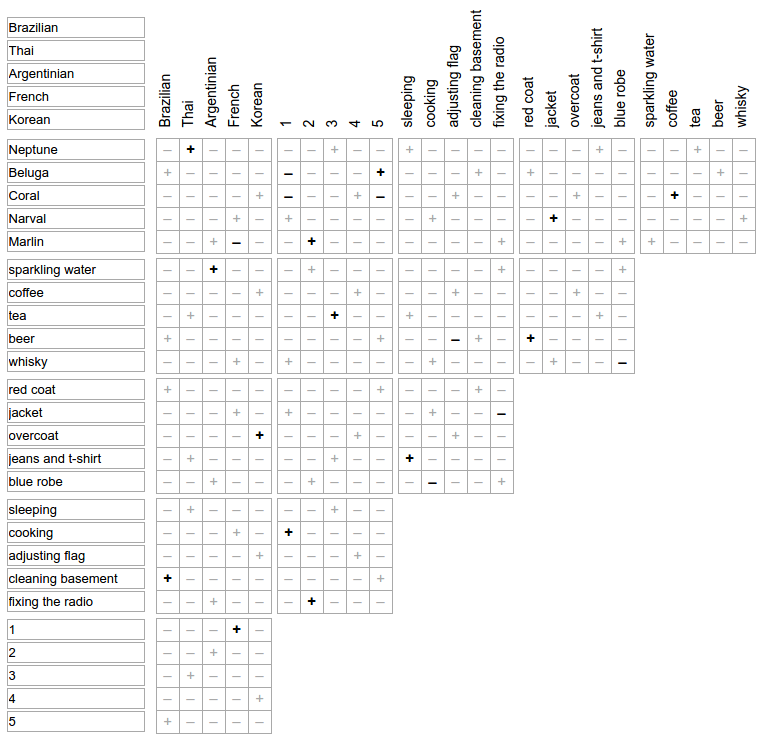 ... I found the identity of the "flag fixer", and determined that

the Korean was the watch thief.

The lying thief was the Korean coffee drinker wearing the overcoat,
and was staying in the 'Coral' cabin.

GIVEN:
person in Coral likes coffee, and middle cabin likes tea, so Coral cannot be middle cabin.
so cabin must be like this -

Thai is in Neptune, so

first cabin cannot be Neptune (Frenchman is there); that leaves Narval.

We know (as found by CyberianRat) that

The person who said they were fixing the flag is the liar, as the Nigerian flag cannot be flown upside down.

Person in Narval wears jacket.
Person in cabin next to jacket-wearer was fixing radio
(and is not the liar, as that contradicts the liar's alibi).
Now we have -

Brazilian said he was cleaning the basement, and is not the liar, so

cannot be in Marlin (Marlin was fixing radio);
Brazilian can only be in Coral or Beluga (other cabins claimed or excluded)

can only be in Narval, Marlin or Beluga (other cabins spoken for by drink)

Blue robe wearer is next to cooker
Korean wears an overcoat

From all this, we know that

If Brazilian in Coral (cleaning basement):
Korean/overcoat in Marlin or Beluga
Argentinian/water in Marlin or Beluga, whichever is left
red coat wearer drinks beer so is neither Korean nor Argentinian; can now only be in Narval
--XX Narval wears a jacket, a contradiction.

So we know that

And the final grid:

the flag on a Nigerian ship looks the same upside down.

Not the answer you're looking for? Browse other questions tagged logical-deduction enigmatic-puzzle logic-grid or ask your own question.

6
Paying for drinks with Mexican and Texan dollars
19
The Pirates of Beal Isle - very long logic grid puzzle
8
Beware of leap years!
6
Understanding the Rookie's Notes
5
Who is richer? A two-way lie-fest
5
The Grand Heist
3
Whose story doesn't add up? (v3)