Of course you can skip this (somewhat long) bit and check out the deal below to see if it's worth your time.

A couple of weeks ago, I had a weird dream. It's been lingering in my mind, and I need help figuring out what it means.

Walking down a dusty, Old West road, I look up to see a red-breasted bird flying through the cloudless sky. I pass a couple of colorful fruit sitting on a bench, playfully teasing one another. A bit further on, I come to a town and am met by a panhandler, parts of whom are visibly decaying.

"I used to be a contender," he says while holding out his hat, "but now I have nothing."

Before I can respond, his body heaves, his hand clasps his mouth, and he vomits, horrifyingly, through his nostrils. Another heave is followed by another discharge, and I hurry away as fast as I can.

At the end of the street, I come to a saloon with a large sign that reads: "Uno". Just below that, smaller print reads, "Leave all horses and aspirations outside." I walk in through the huge door, and look around.

Jars featuring insects immobilized in fossilized sap line the walls. In one corner, a bum tosses a coin onto the table while a tablemate deals cards. The dealer pauses to inspect the coin, then says, "seems legit." A third man at the table bites into a greenish fruit, spilling juice and seeds onto the table, and the dealer yells "Dammit, Roscoe, you’d think eight of those mex-I-can fruits would’ve been enough."

In another corner, a huge barrel is full to the brim with a clear liquid, and must be the source of the juniper smell permeating the dank room.

Feeling oddly hungry, I peek into the storeroom to see what foodstuffs are available. An intricately decorated sausage catches my eye, so I decide to inquire about its availability. As I walk over to the bar, a loud belch reverberates through the room. The bartender wipes off a skillet as I approach.

Before I can say anything, he speaks with a gravelly drawl: "We ain't usually be seein' your type here, most folks in these parts are seeking retribution of one sort or another. You, on the other hand, are lookin' like a movie-star president who's been out in the sun too long."

He notices me eyeing the paintings behind the bar and says, "the first one back there is an Impressionist of a rodent gnawin' on a tree. I done painted that next one mahself, it's a grizzly I'd seen out in Nevada." His gaze lingers on his masterpiece, then he adds, "I always liked the way I captured its little 'un in mid-air."

I decide to switch topics, and for reasons that are not clear to me I say: "I'm looking for the most courageous man you know, but he must be from overseas."

"There are lots of people here, but I don't think any come from the Middle East. Though I guess old Gregor over there does owe his brownness to the time he spent in Kabul. He's always telling tales about how he were the best dang thing to happen to those people over there."

More quietly, he continues, “but he waren't the same once he got back, he wanted to execute his own momma's sister. And he's only here now because the first six monks they done sent didn't work out. Still, he finds ways to enjoy himself."

Suddenly, the door of the saloon bursts open and a man—Sioux, by the look of him—enters and begins babbling angrily about his land. He's an imposing looking figure, with a nose pierced by what seems to be the remains of a wild pig. The backs of his shoes are covered in some sort of pelt. And, perhaps most oddly, around his midsection is a series of carved, naked figurines engaged in...salacious acts.

With a fiery look in his eye, he shouts: "I have come to take back this bar, which is rightly mine." I can tell he is working hard to keep his voice from trembling.

Across the room, an old man wearing a tattered uniform leaps up and in an even more fiery tone says, "this is our place now. If you got a problem with that, I love me a good fight." But these words serve only to further infuriate the indigenous man. The two glare at one another, and the chilling silence is broken only by a single donkey outside.

Then, the Indian makes the first (very odd) move, and grabs a nearby small child and heaves him in an arc towards the vet. The vet dodges, then reaches up and pulls a revolver out from under his Stetson, and bedlam ensues.

The walls of the saloon reap bullet after bullet as firearms appear and are discharged from all corners. In slow motion, I see the man who was just moments ago telling me about paintings get hit and rebound off the wall and floor before coming to rest.

Then, I'm hit, and the pain is immense.

What does this dream really mean?

Each sentence in my dream—separated by periods—clues for a pair of Rotagrams. Two words are Rotagrams if, when you ROT13 one of them, it's an anagram of the other. For example, "rot" and "beg" are Rotagrams because ROT("rot") = ebg, which is an anagram of beg. And the sentence "I had to alert Ms. Fonda." would clue for "warn" and "jane".

There are 45 sentences in my dream, and thus 45 pairs of Rotagrams. Your job is to identify each set of Rotagrams and use them to fill in the chart below. The blanks in the chart match the sentences in my dream in order, from top to bottom and left to right, so no trickiness there. The highlighted letters will spell out the true meaning of my dream. 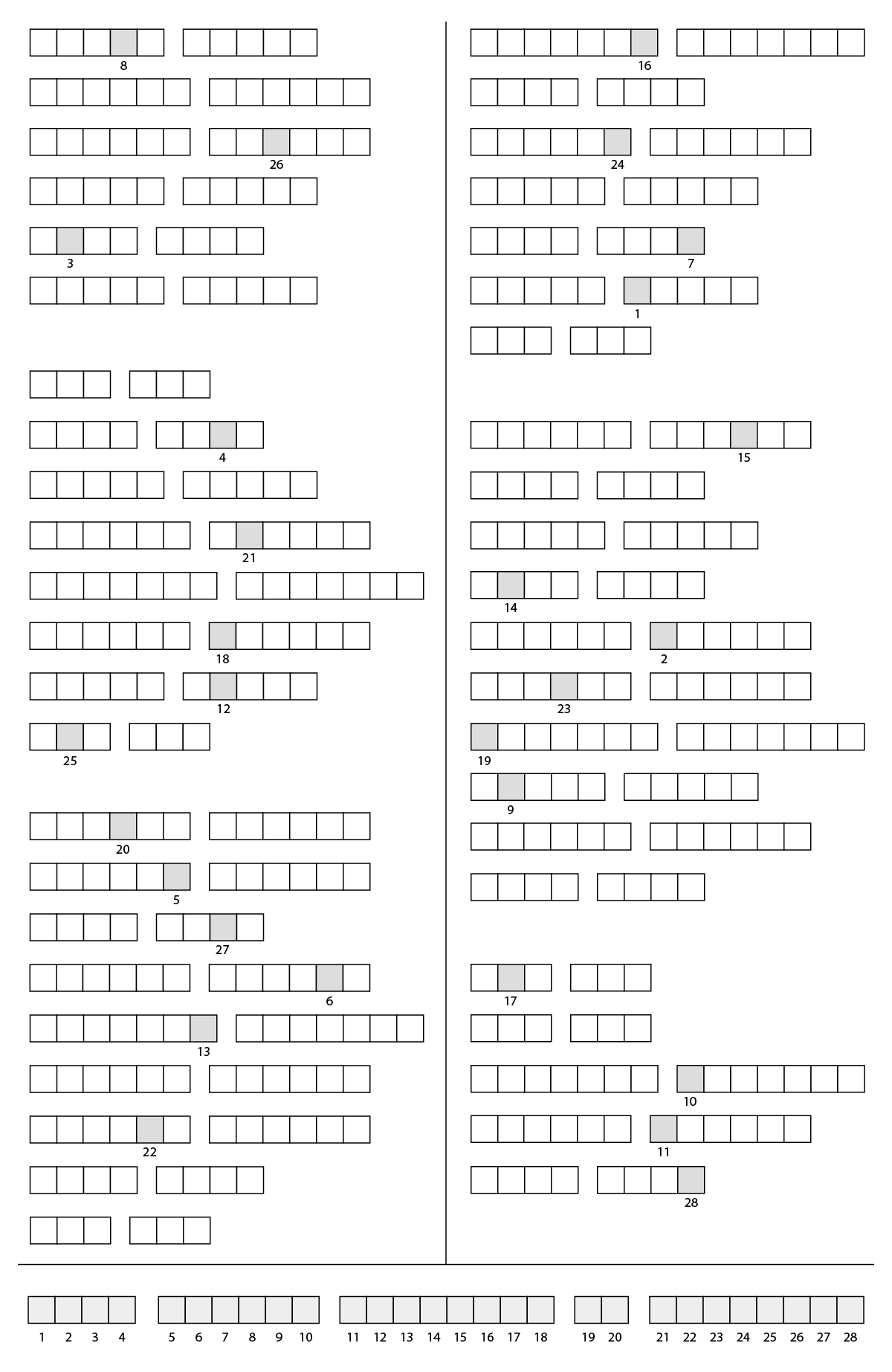 I have a couple to start with: