Can You Find a Tower of Hanoi Word?

Consider a simple Tower of Hanoi set consisting of three rods and three disks. This tower has an optimal solution of seven moves; these seven moves are the only ones allowed in what follows.

For the purposes of this puzzle, you are allowed to letter this set, which means engraving a letter on each disk and at the base of each rod. Any such assignment is a called a lettering.

But not all letterings are permissible. Whenever a disk is moved, let's say it clashes with its new spot (either an empty rod or another disk).

The only letterings that are permissible are those for which every clash in the optimal solution is one between letters that are a single letter distance apart in the alphabet. For example, a clash between a 'p' disk and an 'r' disk is acceptable because 'p' and 'r' are separated by a single letter, 'q'.

Every time a disk clashes with a spot, they interact, yielding the letter that's between them. For example, if a 'p' disk lands at an 'r' spot, a 'q' is generated.

Given that the optimal solution we are considering has seven moves, the resultant string of this solution is seven characters long. 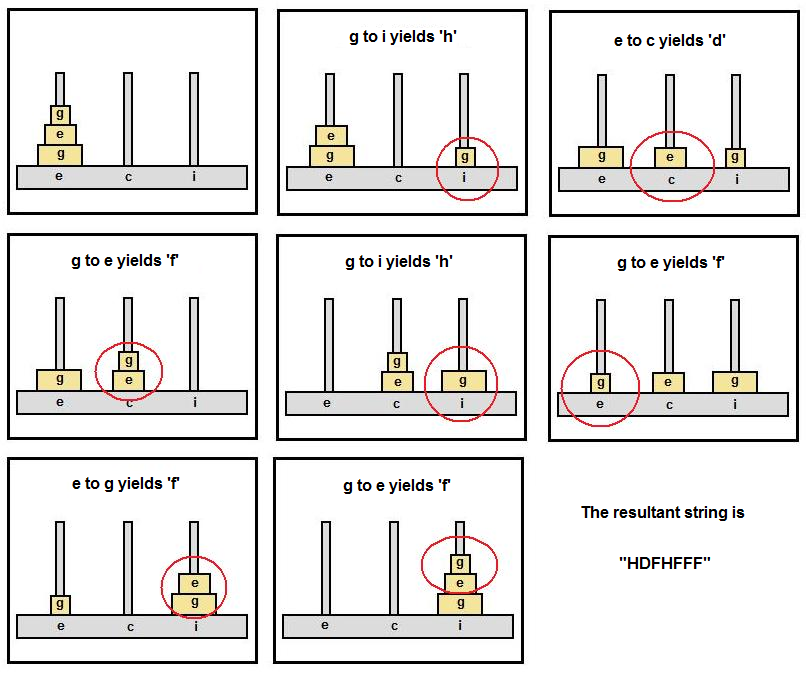 Can you find a lettering where the resultant string is a word of English?

If so, you'll be one of the first people to discover a Tower of Hanoi Word!

(I myself am not sure if they exist.)

Here's a hint to get you started:

P.S. If anyone has any tag recommendations for this, let me know.

The two letters in each pair must differ by $\pm 2$. We'll call the seven signs $s_i$. Then we have:

The resulting letters are the means of the seven pairs. Taking those means and substituting values from the above equations yields:

Thus a solution can be identified by

an offset and five of the signs.

This gives us at most

Here are all the possible solutions, of which

Not the answer you're looking for? Browse other questions tagged word word-property computer-puzzle or ask your own question.