A broken mosaic of words

In this puzzle, you'll have to rebuild words using the "pieces" listed at the bottom and place them in the grid provided below. Some notes about this puzzle: 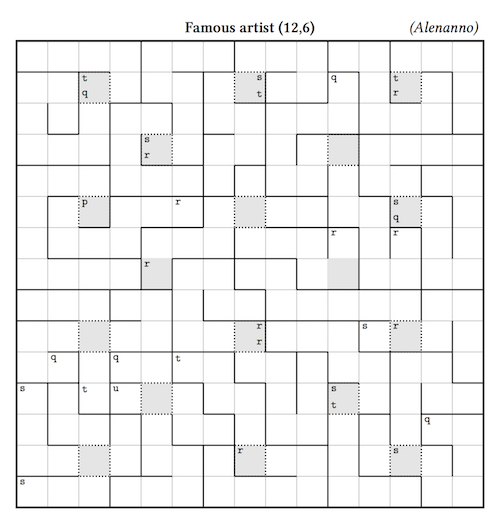 The aim, as stated, is to solve the puzzle, however answers that will explain the relation (or lack thereof) of the words in the grid to the final solution will be taken in better consideration.

Note: I did add the no-computers tag, however I'd like to clarify that this refers only to automatic scripts and the like. Using a crossword solver et similia (which you then check manually) is completely fine.

and the words related to him and his name are these (two of them, marked [*], are name-based misdirections; the connection of the one I've marked [!] is rather indirect):

Most of these are

portions of titles of paintings by Caravaggio.

Some of the others:

He was a pioneer of TENEBRISM in the BAROQUE period, and a strong influence on VELAZQUEZ; he was the subject of an early BIOGRAPHY; his SEXUALITY is a matter of some dispute (and some scandal during his life); he spent some time in EXILE. The JONQUIL is a variety of daffodil whose genus is Narcissus, the subject of one of Caravaggio's paintings. And of course another Michelangelo was a SCULPTOR and a QUARRIER.

and the following words are so far as I can see unrelated:

though I suppose you could argue that

the other Michelangelo was a LITERARY figure, and for all I know maybe some of his poems were in OCTAMETER. I'm not aware that he was a THESPIAN who needed to REHEARSE, though, and I doubt he wrote a BALLAD or studied AQUINAS. But who knows? maybe he did.

(Confession: I had the following help from Alenanno in chat: when I had almost but not quite that word list, he told me I had exactly two words wrong; when I fixed it to produce the above, he confirmed that it was right.)

As ffao perspicaciously notes in comments,

the pqrstu labels give word lengths. That means that the choice of letter tells us basically nothing -- but, as again ffao guessed, the letter always goes at the start of the word.

We can place most of the words (I think 22/32 of them) by deduction, after which we need to turn to the enciphered artist's name. Of course

given the occurrence of VIGENERE among our words, that had better be the cipher we use. But what key? Well, from the words I was able to place deductively I got the following likely key letters: A-T-NTIONTO-ET-ILA. After getting over the foolish first impression that this should be Italian, perhaps scrambled up somehow, it becomes apparent that Alenanno really meant it when he said that "Attention to detail will be key in solving this puzzle"; the key is ATTENTIONTODETAIL.

This lets us place most of the rest of the words. There remain two places where we can switch two words without violating any constraints; I have confirmed with Alenanno that this is just a bit of underdetermination in the puzzle, rather than something that's meant to be resolved by finding some further message hidden in the grid or something. 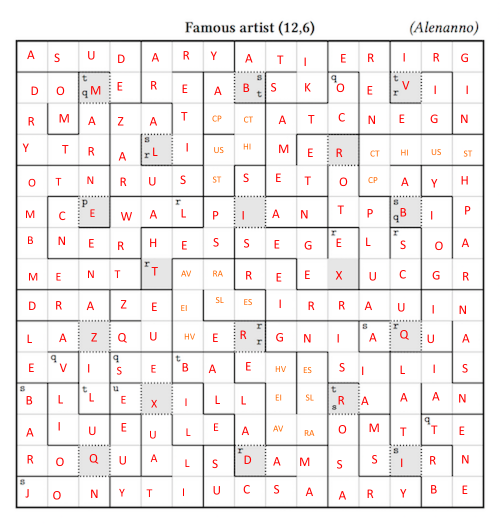