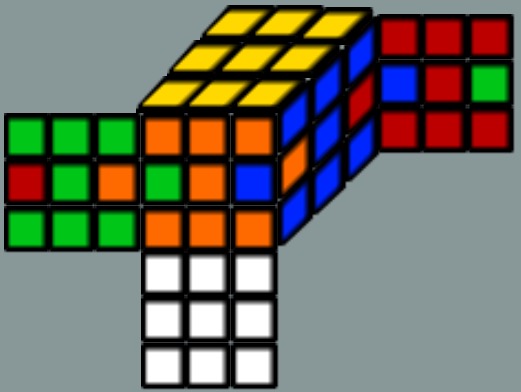 Is there a shorter algorithm to solve this situation?

I don't do speed solving so maybe others can give some advice, but I think using some look-ahead or a different approach that avoids this may be worth looking into. Also note that a longer sequence might actually be faster to perform.

A method that is probably a good start might be the one made by Lars Petrus (also a good start for fewest moves), which may be found at his website.

One simple 4-flip sequence that I like a lot is (E R)4. It doesn't quite flip the four edges you want (it does FL BL BR and UR). A small conjugation to to bring the FR edge to UR then gives the following sequence:

It is not quite as short as Jonathan's, but it is easy to remember and understand.

Not the answer you're looking for? Browse other questions tagged rubiks-cube mechanical-puzzles or ask your own question.