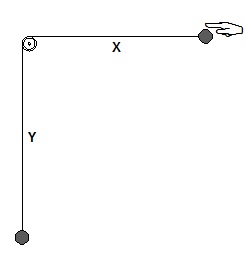 Two identical balls are attached at the ends of inelastic and very light string. Hanging on a fixed friction less pulley, one is pulled higher so that it is at right angle with the other ball. If then released the ball being held is ought to hit or touch the lower ball below. (see figure)

How far is X so that when the higher ball is released it will collide with the lower ball?

(Now a community wiki, as the puzzle is closed, in case anyone wants to add or correct.)

Not a numerical solution but a couple of interesting, if true, conjectures.

Conjecture B. Although ball Y moves downward at first, it will be moving upward when the balls meet.

This is because the overall downward force is almost always greater on X than on Y, and never less.

While gravity pulls down on both balls with the same force, the tension along the cable always works more directly against gravity on ball Y than on ball X, except when they are both at vertical, where they experience identical forces.

Conjecture B.   Ball Y will be moving upward when the balls meet.

As the cable’s length is fixed, when the balls meet they must either have no up–down motion or have equally opposite up–down motions. (Ball X will also be moving sideways.) As ball X will be going downward more rapidly than ball Y (according to conjecture A), they cannot have 0 up–down motion and ball Y must be the one going upward.

While I lack the math skill to solve this, I was able to write a simulation script to step through the kinematics in very small $\Delta$t and the results are incorporated in the following pretty graph (now with data included):

Since the lower ball is a fixed distance away from the upper one, along the path of the string (i.e. up and over the pulley), and it's identical to the upper ball, we can actually disregard its existence entirely and treat it as a fixed magnitude force pulling the upper ball in the direction of the pulley. The only interesting part about it is that we care when its position and the upper ball's position coincide, which (ignoring the balls' diameter) happens when both are 5 feet below the pulley and directly under it (X=0,Y=-5). So now we have one mass to worry about, with two forces acting on it - one, downward force of gravity, and one, equal in magnitude but different in direction, the string pulling it in the direction of the pulley. Iterating over small steps in time and computing each acceleration, velocity, and position in both X and Y, gives the results shown in the graph.

(*)note we cheat here a little; since both masses are equal, there's no need to muck about with F=ma - force and mass are equal magnitude, just different units. it all works out (check if you don't believe it).

Pretty sure we gonna have to use the 9.8 gravitational force value.
The ball going straight down will get the full 9.8 force going down while the other ball will waste about 50%(initially) of that force going leftward.
So the ball pointing down will pull the cord downward the whole time since it's downward force is stronger. The right ball will however get an increasingly stronger downward force the closer it gets to the other ball so the rate at which the downward ball will pull the rope will be constantly slowing down.
All in all, X will have to be bigger than Y but until I find the rate of deceleration, I can't say more than that.

Not the answer you're looking for? Browse other questions tagged physics or ask your own question.