What is a CB Number™?

This puzzle is based off the What is a Word™, What is a Phrase™ and What is a Number™ series started by JLee.

If a number conforms to a certain rule, I call it a CB Number™. Use the following examples to find the rule: 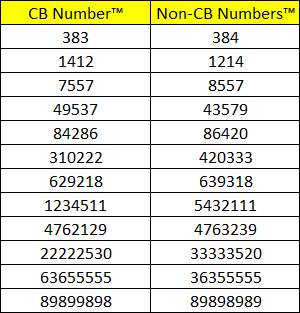 Here is a CSV:

The puzzle relies on the series' inbuilt assumption, that each number can be tested for whether it is a CB Number™ own its own. In particular, a number's relationship to other numbers in the sequence is irrelevant.

These are not the only examples of CB Numbers™, more can be found.

The only reason the Non-CB Numbers™ are not in ascending order is because I have tried to make them look similar to the corresponding CB Numbers™ to their left. Note that this doesn't change the puzzle.

CB Numbers are numbers that

If you treat each digit as weights, the whole number balances on the midpoint of the scale.

in the number 1412, let us visualise as 1-4^1-2 where ^ indicates the midpoint. It can be observed that the distance-to-center of an outer digit is 3 times that of the inner digit.