As you walk into yet another room in this lab, the strange professor says "Good show with that last one. Now, this bot works a bit better, but ... Excuse me..." The professor steps out of the room and shares a few angry words with words with his assistant.

Returning, he says "This bot broke its shutdown panel. I had my assistant rig up a button to reboot the panel... and he put it in the middle of the maze for some reason. This bot has broken dials too; I need to get better dials. On this one, the left green dial is locked at L and the right blue dial is locked at 2."

"Can you figure out how to get the bot from the top-left to the bottom-right without hitting any walls, bearing in mind it needs to run over the button in the exact middle on the way? It only needs hit the button for a moment, so you don't need to stop there." 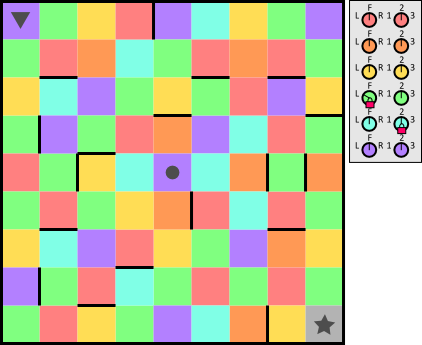 "As a reminder, these dials set how the bot moves. He's got a camera on the bottom. When turned on, he checks the color of the space he's on and moves according to the dials of that color. First he either turns 90 degrees [L]eft, 90 degrees [R]ight, or keeps going [F]orwards, based on the left dial. Then he moves the number of spaces shown on the right dial; so one, two or three spaces. Once he moves, he checks the new space and starts again. The matching dials glitch is in this model too; if two sets of dials match exactly, he won't move at all."

I am working on a way to get the picture up, but these are the combos: 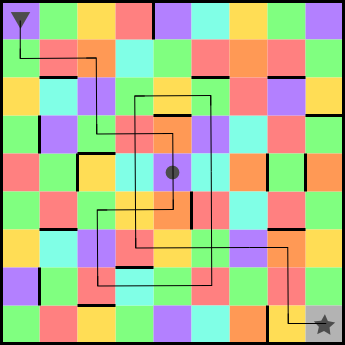