This is a Random thought that occurred to me. It consists of combining aspects of Minesweeper, Nonograms, and Crosswords together to create this rather interesting and, I believe, difficult puzzle.

If the rules are unclear just ask me in a comment or in chat, and I'll modify to question to try and make the rules clearer.

So the question is, What is the well known quote and who is it by?

(I did this without looking at the CW. I claim no credit for imposing arbitrary restrictions on myself, but it means any mistakes are my own :-).)

The final grid is as follows:

which obeys the following constraint:

when a cell contains a number, that number is the total number of spaces surrounding it (as in Minesweeper). This is why the maximum digit is 8 rather than 9.

each row as containing the bits of an ASCII number

When groups of cells are referred to collectively,

their sum is usually intended (never, I think, the number obtained by treating them as the digits of a base-10 number).

Note: in the course of solving this I found some errors in the puzzle, which dcfyj has corrected, but it's possible that some inconsistencies may remain (1) in the puzzle, (2) in my answer, or (3) between them. I will be grateful for having any of them pointed out :-).

A MineSweeper Crossword: A Making of

I created this a puzzle a while ago, but @humn suggested that a "making of" wrap-up post would not be amiss, as such, here it is (I tried to keep it fairly spoiler free for those that wish to solve the puzzle at a later date).

This was written to the best of my recollection (some things may have happened slightly differently, but this is the gist of it).

This puzzle started off as one of my many random thoughts. "What if you clue minesweeper as though it were a crossword/nonogram?", and thus a puzzle began to be formed.

Now, at the time of making this I thought, "a simple minesweeper crossword will not do, I should make the minesweeper translate into a well known saying or some-such." (Obviously I didn't actually think it quite that way, but I don't remember what I thought, so you get the point.)

Do or do not, there is no try

which is of course stated by

With saying in hand (mind?) I started moving forward. I decided to translate the saying into

to make it easier to put into the minesweeper grid.

Once that was done, I used the ones as "bombs" for minesweeper and all the other cells turned into numbers as per the minesweeper rules. Once my numbers were in place (I found out later I had miscounted in a few places, thanks @Gareth!), I started to think up clues to write to reference them.

I wanted the clues to be worded somewhat simlarly to a crossword, but I also wanted them (once solved) to be read as a nonogram. This meant that I had to think of ways to clue the numbers and then have the solvers use the one+ space required rule of nonograms to place the numbers in the grid.

Writing the clues was pretty hard for me, especially the 2s. I wanted to come up with a unique clue for each one I wrote, that way, the solver would still have to solve each one (no freebies! :P).

For the most part this uniqueness wasn't a huge issue, but I had so many 2s on the board (I believe 51) that coming up with a unique clue for each one was a task in itself... This part took me a few days to finish (working a few hours on it each day).

As I was writing the clues, I wanted to use primes in some of them, but I didn't want to be overly obvious that I was using primes specifically. So I came up with referring to them as capitalized ordinals. That allowed me the freedom of using the primes in my clues as well as giving the solvers something else to figure out.

Initially I was only going to clue the rows, but as I neared completing those clues I realized that it wasn't enough information to solve the puzzle. As such I had to come up with clues for the columns as well.

After an hour or two more, I had finally finished writing all my clues. Now began the process of posting it. The posting in itself wasn't particularly hard, just long. Plus I had to think of a way to format it.

If you look at the comments on the question (or the edit history) you'll see I went through a few different variations of formatting until I got to one that worked for everyone (or at least most people).

Fun Fact: My favorite clue out of the bunch is "A song sung by Fievel and Tiger (1)"

Second community wiki for the clues

As for the clues: 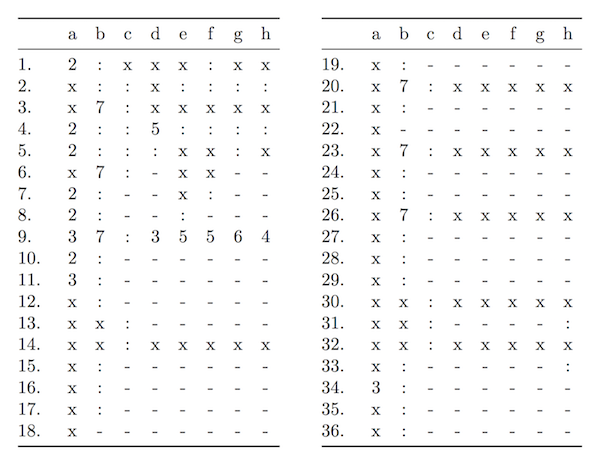 Not the answer you're looking for? Browse other questions tagged knowledge crosswords minesweeper nonogram or ask your own question.

5
This one should be popular: Part two!
6
Concordant Crossword: A MtG crossword
48
A crossword so simple, it practically solves itself
9
A Numbers Crossword
28
Can you name the two?
14
Cryptic Crossword?
4
What if your wordsearch was a crossword?
12
AnaCross: A crossword made of anagrams
9
Massively multilingual Euro crossword
4
Math Crossword with a Twist