So I was just browsing Puzzling as usual, when I stumbled upon a... to put it mildly, "strange" question:

The question seems to be permanently deleted now...

For those who disabled GIFs in their browser, here are pictures that together form the whole webpage of the question: One, two, three. The question score constantly gets lower and when you hover over the word "clouds" (sorry for forgetting doing that in the GIF) a tooltip appears which says:

Edit: Thanks to Sleafar for stitching all three parts together. The missing parts between part 2 and 3 do not contain anything important.

Since the colored ciphertexts are hard to read:

Orange: HUSOQTLNBSSALRDIDPNOKHFTHEXJVMDDJCCNCMMOTRTFRETJTXZGSBUPWRNOLZYVIRSHDEQKDRXVTQGRNMOSXDFNWEAINGWSQBBQYXFTWFHECINGVSO
Yellow: NJVZVOGYEVSGOGSJRKBASPBFOQMFHFJKUFEG
White: ITLAFSGWHOBTCHIEUOHETLHDVENSLESECDOAI
Blue: MGQPHPGRNKEAWQYG Edit: Another mistake on my part, the intended ciphertext is MGQPHPGRNKEAVPXF. But as you can see only the last few letters were wrong, so it's not a major mistake and you would've still gotten part of the plaintext with the intended method before.
Green: UDWTTERUDCTONOHGON
Red: ESTXHMWETZOYRIJOM
Gray at the bottom of the page:

To the █████ of the ███

The profile image is also a GIF, and since the quality of it in the video is bad, here's a larger version of it. I didn't want to include it directly in this post since it's kind of annyoing.

The substring "I started from the seemingly perfect state, with clouds(to which I always returned to for orientation and only changed the height when I had to) in front of me and earth below" primarily gives instructions how to rotate the cube when labelling it (keeping the "seemingly perfect state", of course), although one part of it also tells how to hold the cube when starting to "reconsider the self-image".

How do I put this... I apparently used a fake Rubik's cube when making this puzzle (without me knowing it). Sorry for the waste of energy and time if you tried to solve this, I have no excuse for it. The color scheme my cube has is this one. I also gave away the orientation here. You can downvote this into oblivion if you want, I'd certainly understand it.

This isn't really a cipher, even though it does have to do with cryptology. Most of it is just junk, so the plaintext isn't actually 115 characters long.

What are the plaintexts of all the ciphers (including the gray text at the bottom)? Please add reasoning, not only the solution.

Please upvote the other answers as well. ffao solved half of the ciphers on his own, and dcfyj solved the cube shortly before I did.

As known from the hints the OP is using a non standard layout for the Rubik's Cube. We also know that the front of the cube should be white ("with clouds in front of me") and the bottom blue (as clarified by the OP). Applying the cube faces from the question gives this: 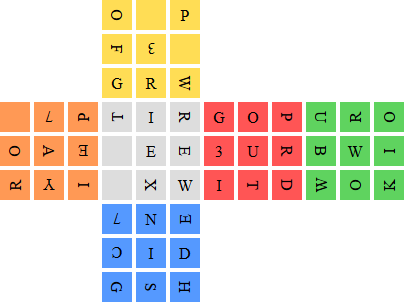 In the copy of the deleted question we can see names of angels on the right side. The capital letters in these names are instructions that should be applied to the cube.

I have created a tool which performs all these rotations, while preserving the orientation of the letters. This is the final result (click on the image to see all steps): 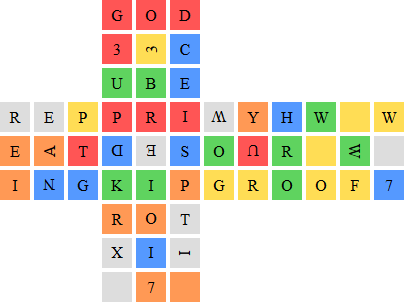 We can see some words on some cube faces: "GOD", "CUBE", "REPEATING", "PRIDE", "SKIP", "MY HOUR". Each face is a hint for the cipher with the corresponding color of the starting position.

This is not a hint for the God's Number, but for the Trifid cipher (which works with a 3×3×3 cube). There are many variants of this cipher, therefore I will simply paste a screenshot created with this online tool: 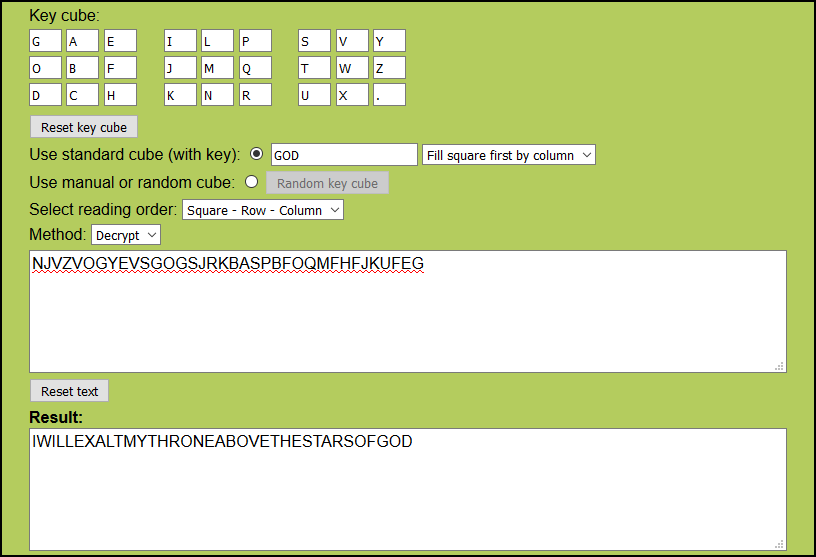 This is a variation of the Ceasar cipher (aka. ROT-n). First we need to decrement all letters by 7, giving:

Then we increment the first letter by 0, the second by 1, the third by 2, and so on:

The hint for this face is to use the rail fence cipher (because of the arrangement of the W's) using an offset of 7, which gives the following:

All currently found solutions are quotes from Isaiah 14 (probably from the King James Bible - thanks to ffao for correction). Assuming the last quote would be also from this text, this means the solution for the gray part is probably:

After the rotation step, the gimmick is that

the writings in the faces are hints as to the method used to encrypt the corresponding ciphertexts.

"I will ascend above the heights of the clouds"

This was obtained by using a skip cipher with parameter 7 on the text.

"brought down to hell"

This is a Gronsfeld cipher with key 315, which is known as the Devil's hour: https://en.m.wikipedia.org/wiki/Witching_hour

"son of the morning"

Due to the clue being "repeating", I initially tried to take repeating letters, but that came out a lot of junk. If you take the repeating bigrams and trigrams instead, you get "so", "no", "ft", "he", "mo", "rn", "ing":

This is mostly to help others in the process as I'm awful at decrypting ciphers.

So After some poking around I figured out that

white was the front face

and while chatting with the OP we realized that

He wasn't using a standard rubik's cube so my colors weren't correctly oriented. So the correct orientation (which the OP told me as well) is:
- Yellow as Top,
- White as Front,
- Orange as Left,
- Red as Right,
- Blue as Bottom
- and Green as Back

Before all of that came to light I realized that the HNQ had some valuable information for me. Which in this case was:

The moves list to put the cube in the correct placements.

Which tells me to:

Turn the the faces in that particular order, where R is right, U is up(top), L is left, D is down, B is back, and F is front.
In this notation the letter alone means to rotate clockwise and a letter with I or ' (single quote) is rotate counter-clockwise.

Doing all this gave me this result: 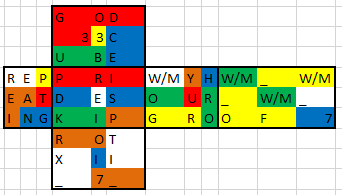 Which from that I get these words/sentences/phrases/cryptic-thingies:

For these _ means an empty spot (a space) and W/M is because I'm not sure if it's an M or a W on the picture.

And that's where I get stuck...

My progress so far, working with a guy who actually knows the Rubik's Cube:
Took a hint from others for

The angels' names with odd capitalisation
But I also noticed the I's and scribed those too.

The clouds and grass

Are white and green, respectively, giving us the cube's orientation.

Reimagining with information from others

Is following the aforementioned string as standard move notation, with I's meaning ccw.

Involves matching up the faces from the avatar gif with the currently scrambled cube.
The trick is orientation, which we can get a sense of by what rotation the pieces will undergo when they return to the solved state.
Assuming that the colours refer to the centres... We're stuck, trying to find a combination that results in all letters being right way up when unscrambled.

Returned to for orientation, only changing the height when necessary

Seems to refer to relative orientation, so "towards blue, blue and green towards white"
Although maybe "towards white, white and yellow towards blue" makes more sense.
Unless you're taking white as front and blue as top, which is what the rest of it suggests...
EDIT: I just realised something my teammate had known for a while, regarding orientation of the faces. This probably doesn't relate to this at all.

This is as far as we've figured.
Also yes please to chat room.