And it's the Math Test Day again! What a great day!

You are given this task (imagine the teacher writing on the blackboard if it helps you in any way):

Find a way to cut any given pentagon with a straight line into two equal parts.

That is, you have to find how to cut any given (convex) pentagon into two parts with an equal area, using a single straight cut, starting at one point of the circumference, and ending at another one. There are no tricks here, no folding, nothing like that.

And the test starts... Now! You have exactly 45 minutes left 'till the test ends. (caused misconceptions)

So, how exactly can you do this?

Whoops, I just realized the method fails, if...

It almost surely can be solved by appropriate choice of the first side of the pentagon, but I'm not sure now, which one is appropriate...

If $M$ falls outside the $AB$ segment, say past the $B$ end, then we need to shift it to the original pentagon's edge in such a way, that the 1:1 area ratio is preserved.
This can be done with the help of an $m$ line, passing through $M$ and parallel to $BD$. It intersects $BC$ at some point $P$ and triangles $BDP$ and $BDM$ have equal areas, hence pentagon $ABPDE$ keeps its area equal to the triangle $E'MD$ which is half of $ABCDE$.
Finally $DP$ is a desired cut.

Here is a picture: 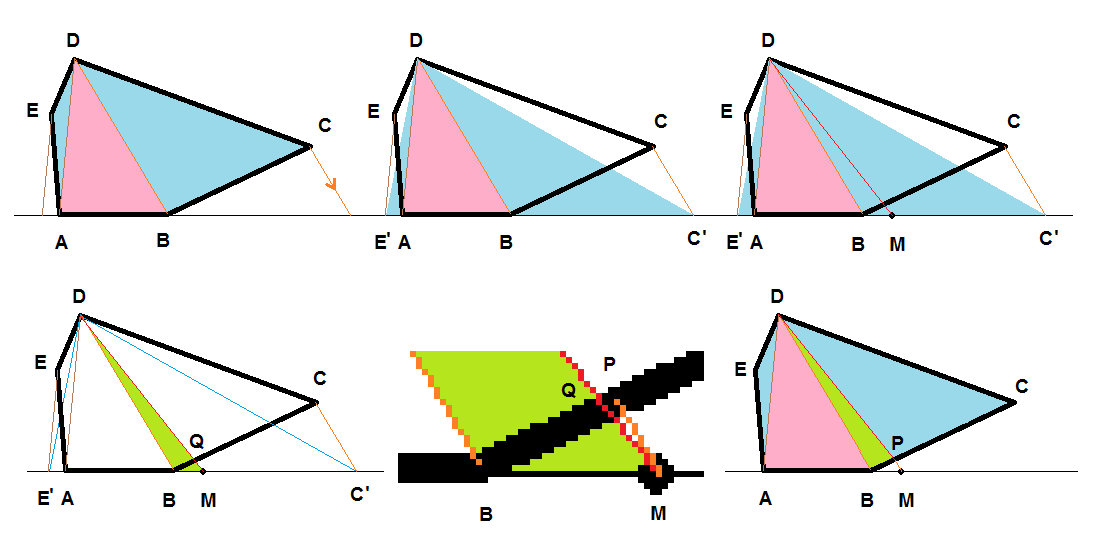 One way to construct the line:

any line crossing centroid of a triangle or a quadrangle divides it into two parts with the same area - therefore the line we constructed divides the pentagon in two parts, each having equal area of the triangle and the quadrangle

I know not maths to my eternal shame but

could you draw a square/rectangle around the pentagon where one line is on top of a line in the pentagon and the other three lines touch the remaining verts. Then calculate the area of the triangles formed around it. Then draw a line straight down from the vert opposite the line touching the square (parallel to the side of the square). Then draw a line from that same vert to form a triangle with an area equal to the difference in area between the two outer triangles on either side and cut along the diagonal line?

I don't expect this to be correct and I haven't showed full working but I'm hoping that this could at least be "helpful" to someone. 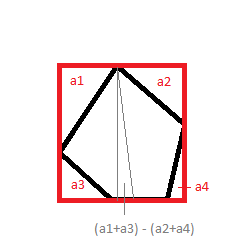 I realise I probably got the equation on the picture back to front, but there is probably a more correct way to express a calculation of the difference between two sums anyway?

Building upon the "rectangle around pentagon" idea, I think I can assert that...

You can definitely do this problem.

I have yet to do it by hand for reasons you will see, but I have basically solved this for all obtuse pentagons. 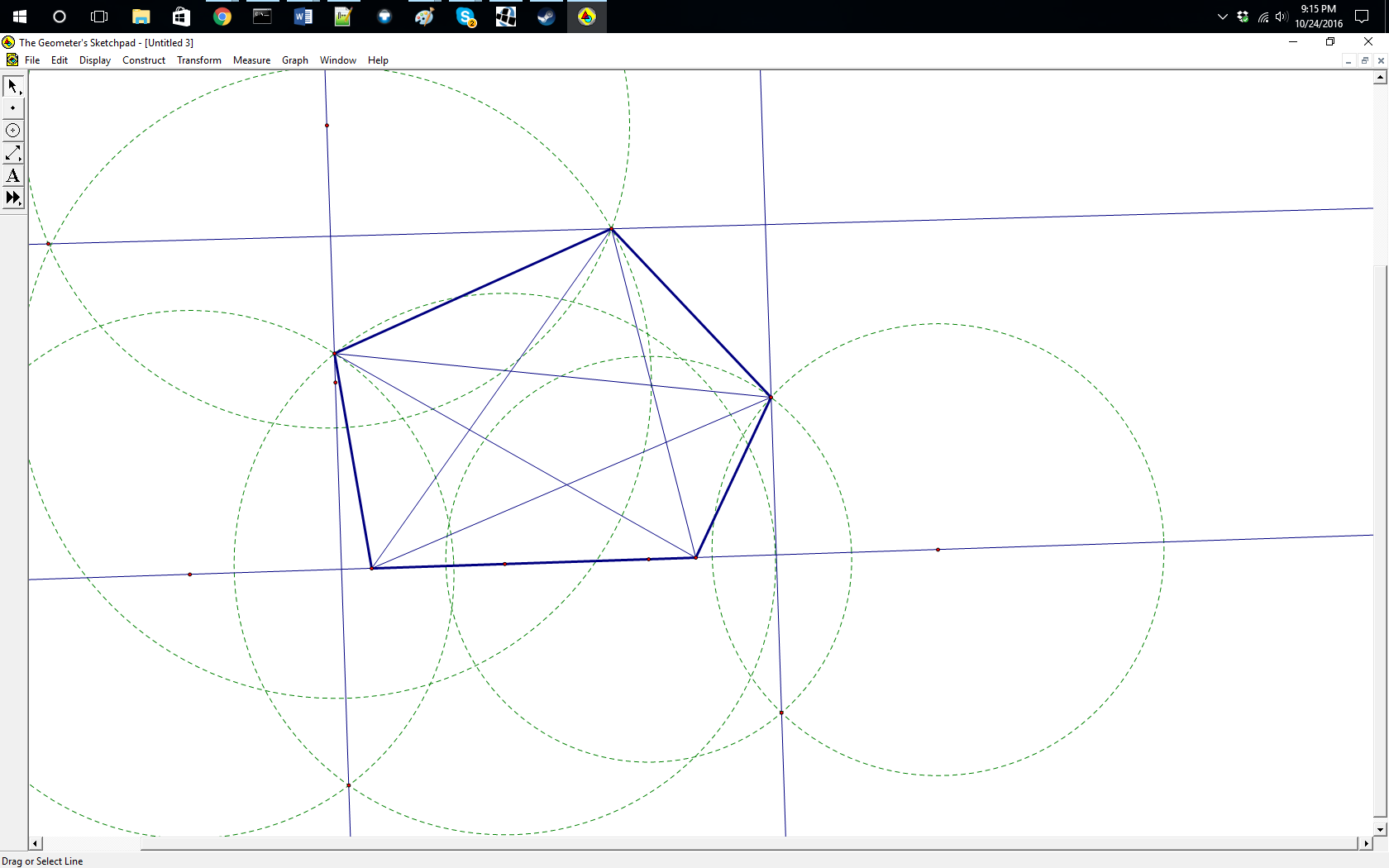 ... Define multiplication with construction.
You can read about this at our friend here: https://math.stackexchange.com/questions/139340/representing-the-multiplication-of-two-numbers-on-the-real-line

Find the distance from the bottom left corner of the rectangle, to the median of the pentagon. Using tons of algebra, of course.

With multiplication and trivial addition/subtraction and somewhat-trivial division defined, we can solve for the median's position by first finding the areas of the four triangles, subtracting them from the rectangle, and dividing the result by 2. This returns the area enclosed by half of the rectangle, and the pentagon's median. This is a trapezoid. Henceforth, we use trivial algebra. All operations are well defined by construction after the base unit is defined as well.

Here is the double the area of the bottom-right triangle stored as a length: 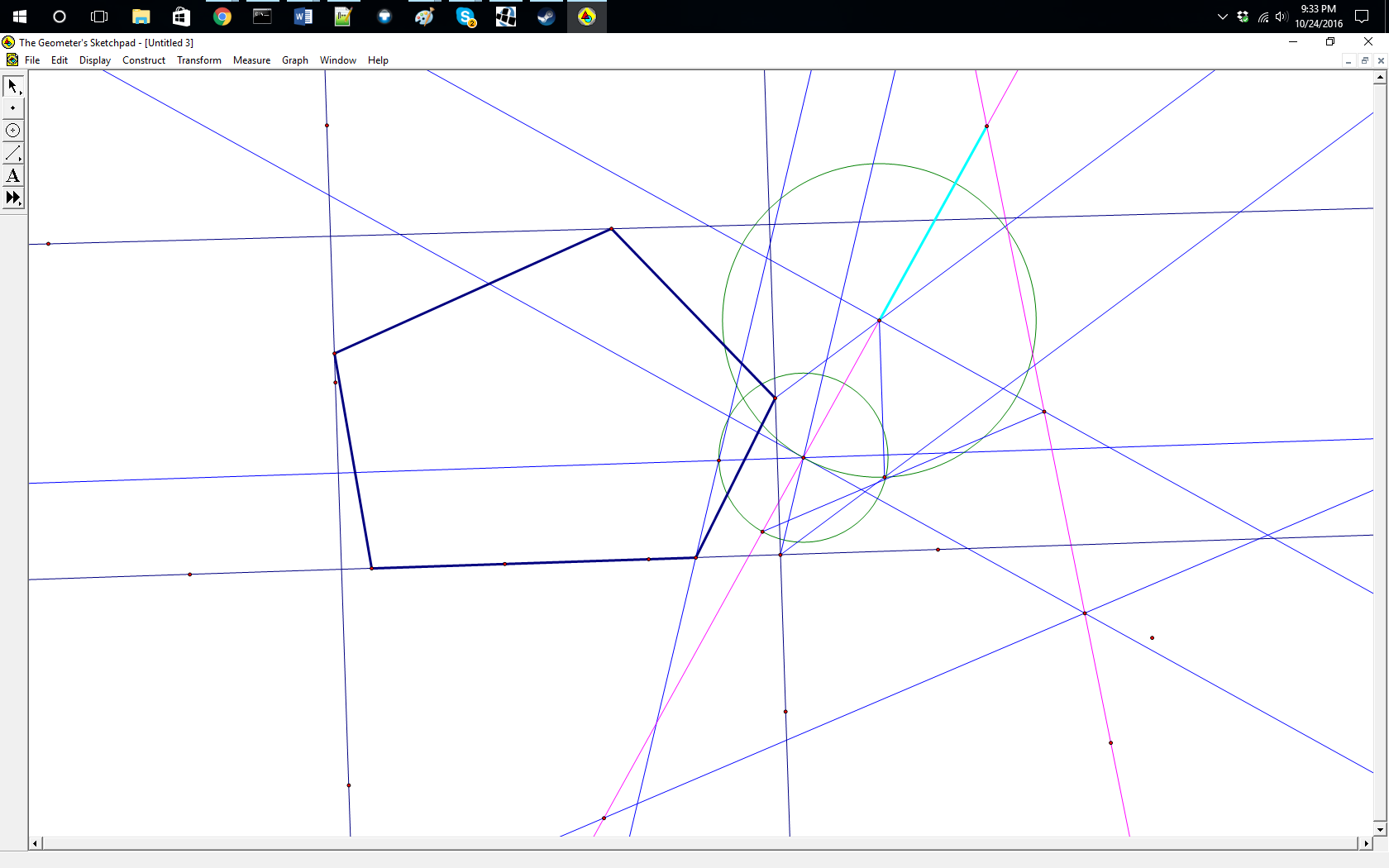 Similar constructions can be used to solve for the area of an "acute", or whatever-you-name-it, pentagon.

If the internet demands that I finish the construction for internet points, I will consider it when I finish reading my history textbook. Peace.

How about this algorithm?

If we imagine that we have constructed this pentagon as, say, a piece of card, and place a pin in one of its vertices, we hang the polygon from that vertex against a wall. We allow it to freely rotate, so that its own weight ensures an equal distribution to either side of the pin. We then hang a plumb line from the pin, and that line is the line that divides the pentagon in half.

As jwg pointed out in the comments, this unfortunately doesn't actually work since the line passing through the centre of mass isn't necessarily on the line dividing the area in half.

We should be able to:

I just realized I had the same idea as Brent.

This is a reply to the answer by helps_7766,
and it should be posted as a comment, but it's too long, so I decided to post it as an answer.

Unfortunately, the method presented does not 'yield the center of mass of the pentagon'. As a counterexample let's see the image:

The center of mass of the black triangle (on the left) is at $1/3$ of its height.

Please note that we can make the red triangles as thin as we want, effectively obtaining a spatial distribution of the mass of our pentagon indistinguishable from the black triangle. Anyway, the resulting point will appear at positions described above.

That's because the three blue points' heights depend linearly on the heights of vertices of respective triangles, but they do not depend on the triangles' areas. Hence they can be shifted significantly with appropriate vertex shifts with no significant change in the area.

As a result, the supposed 'center of mass' has little to do with actual mass distribution and with an actual center of mass.

I don't think this works for most unfortunately 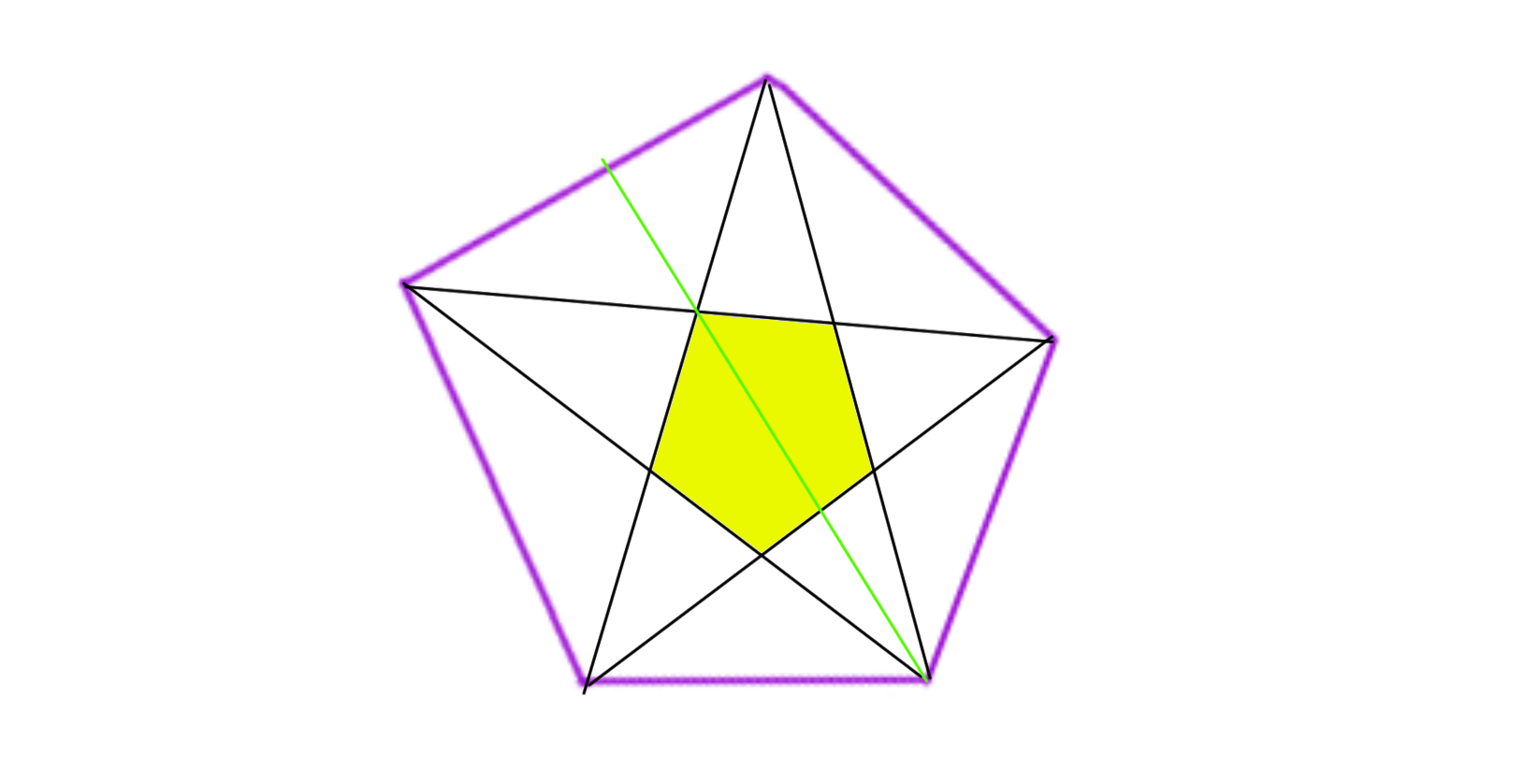 You have to use your brain where you draw the line, for instance oleslaw gave the example: 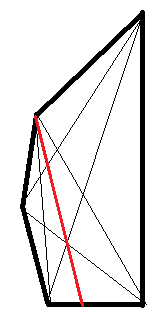 Where it obviously isn't equal, however it would be if you draw the line more horizontally through the middle pentagon

Consider the pentagon ABCDE, divide it into three triangles and find their centroids, then find the centroid of the triangle formed from those three points.

12
Divide a rectangle with a rectangular hole into two equal parts
2
Time for tea: cake division by lines
23
Fair share of a square watermelon?
10
Polygonal Pizza
14
The Erasmus pentagon
13
Ernie and the Case of the Singing Sisters
9
Cutting a Slice of Cake Into Two
8
Making 7 congruent triangles from the pieces of a triangle dissection
9
Cutting a shape into two equal area shapes